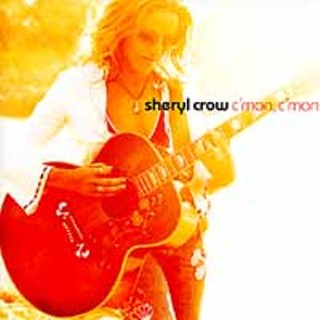 C'mon, C'mon (A&M) Remember the old joke about eating Chinese food? That when you're done, you're hungry an hour later? Sheryl Crow's fourth studio album, C'mon, C'mon, could fit easily into a Styrofoam container. Radio-friendly tracks ("Soak Up the Sun," "Hole in My Pocket") ensure Crow airplay by bringing in rock royalty like Stevie Nicks, Lenny Kravitz, Natalie Maines, Don Henley, and Emmylou Harris, a sure sign someone thought the album would suck otherwise. Crow's sun-bronzed vocals match her beach bunny good looks to create Americana-flavored pop for the Martha Stewart set and succeeds admirably on this account. Songs like "Weather Channel," a gorgeous duet with Harris, elevate the album out of sheer mediocrity, but the vacuous and predictable cheatin' number, "It's Not Easy," with Henley sounding disturbingly like Journey's Steve Perry, reeks of Nashville schmaltz. Crow's self-cast role as the worldly rebel is disingenuous, perhaps because it's hard to give the middle finger with one hand while blowing kisses to American Express with the other. Maybe this is what passes for rebellion now -- a major label, videogenic looks, and VH1's stamp of approval -- but it equals undistinguished California rock and will probably sell a couple million.