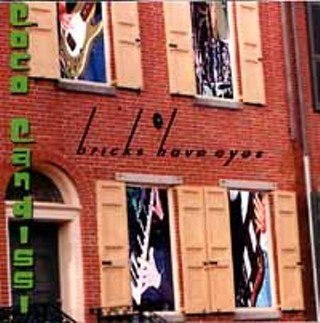 Bricks Have Eyes (Known Rock Figures) Swimming against the reverse peristaltic waves of nostalgia, Austin's Coco Candissi channels the wine-cooler-fueled exuberance of growing up in the Eighties without making you gag from too much sickly sweetness. A tune like "Niagara" conjures up the latent urge to do a convoluted version of Molly Ringwald's jerky detention-hall dance in The Breakfast Club, and "Pin Prick" is what you'd want on the radio while driving too fast to a six-kegger on a cold winter night. Even as the local quartet embraces the cheap Casio riffs of Reagan's salad days, they remain grounded with a solid pop rock foundation that keeps the New Wavisms in check. Brandon Tucker's fuzzed-out guitar goes a long way toward countering the retro-futuristic sleekness of Melissa Tucker's keyboards, and as vocalists, the two Tuckers deliver warm boy/girl harmonies with a tinge of faux-Brit 4AD insouciance. "Sugar Tooth" showcases Coco Candissi's ability to transform a standard all-out rocker into a majestic explosion of sexually charged noise, while the trashed-out Eurodisco of "Hummingbird" turns awkwardly phrased childhood reminiscences into effervescent charm. While Bricks Have Eyes can't quite capture the full rock energy of the group's live shows, it exudes enough youthful promise to make it a worthy destination for anyone with a craving for slightly synthetic poptones.