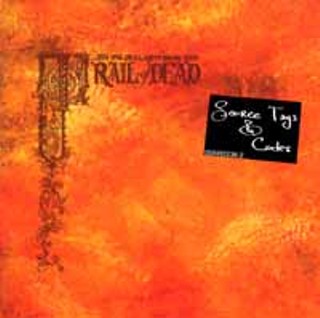 Source Tags & Codes (Interscope) Saw the video for "Another Morning Stoner" last night. There they were, in all their glory, playing for a packed arena, crowd and band playing tug-of-war with guitars. Cut away to images of the band in John Peel's studio. Cut back to Conrad Keely, swaying back and forth at center stage like a god unmoved in the eye of the sonic hurricane. This is bigger than all of us now, this unwieldy thing called ... And You Will Know Us by the Trail of Dead. From its opening salvo, Source Tags & Codes proves to be a very special album. "It Was There That I Saw You" reveals Keely as an anglophiliac tunesmith of the first order, his best Damon Albarn clashing with a massive barrage of screaming sonic majesty. As the tune settles in, swelling strings make their regal presence known, as they do throughout the album. A staticky segue feeds perfectly into "Another Morning Stoner," another Keely masterstroke. Neil Busch's taut, sneering "Baudelaire" kicks up the rock factor, which explodes with Jason Reece's punk rock "Homage." Keely's there to pick up the shards, and on "How Near, How Far," craft them into something elegant, powerful, and beautiful. Reece's machine-gun drumming thrusts Keely's distorted dreamtime melodies into the realm of the unforgettable. "Days of Being Wild" holds all the rock fury we expect from this Austin quartet, and the newfound focus we'll expect from now on. "Relative Ways" is the jewel in the crown, the "Teenage Riot" of this Daydream Nation. "It's okay ... I'm a saint," Keely's voice cracks. "I forgave your mistakes." The band said in a recent interview that they worry about Source Tags being ignored like Fastball, Spoon, and Sixteen Deluxe's recent major-label efforts were. Well, they've got nothing to worry about, because Source Tags & Codes is an album that absolutely cannot be ignored.

... And You Will Know Us by the Trail of Dead, Source Tags & Codes