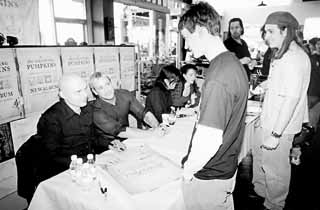 Fifteen thousand. The vast majority of the 20,000-plus albums released every year never sell 15,000 copies. Austinite Bob Schneider, on the other hand, sold 15,000 copies of his album Lonelyland out of one store alone. Care to guess which one? Hint: It's located at Sixth and Lamar. They also just celebrated their 20th anniversary, April 1 to be exact. Give up yet?

Okay, to anyone remotely familiar with what goes on in Austin musically, it wasn't that difficult of a question to begin with. But yeah, it's been 20 years for Waterloo Records. That's enough to make you feel old if you remember shopping at the previous locale, the shoebox-shaped building wedged between Taco Cabana and Wendy's that is currently occupied by Soccer World -- just south of the river on Lamar.

There are two very good reasons why Waterloo is entering its third decade as a fixture in Austin. First, the 'Loo's success can be attributed to the fact that it's simply a darn good record store. The place has won Best Music Store in the Austin Music Awards every year of its existence. Plus, the industry's trade association, the National Association of Recording Merchandisers (NARM), has given Waterloo the Retailer of the Year Award for a medium-size retailer (defined by sales between $2 million and $25 million) for three of the last four years. Even though it sits much closer to the two than the 25 in that category, Waterloo has managed to out-slug big-timers like Amazon.com, CDNow, and J&R Music World, the guys that take out the back-page ad of The New York Times for those honors.

Moreover, the store gets paid maybe the biggest compliment that musicians can give it. They themselves shop there. Sheryl Crow, the Dixie Chicks, Sonic Youth, the Melvins, Moby, Al Jourgensen, Modest Mouse, Henry Rollins -- all have dropped cash into Waterloo's registers on multiple occasions.

"It's one of those places that's too good," says Mac McCaughan from Superchunk, who hits the store whenever his band rolls through town. "You spend too much money. And you can't even look through all of the sections. You either have to make a plan like, 'Okay, I'm just going to look on this aisle,' or break the bank way too early in the tour."

It's not merely the music on the shelves that makes the store worth the trip.

"The last time I walked in, there was Horton Heat playing in the middle of the store," recounts the Dead Kennedy's original vocalist Jello Biafra, who spent that excursion in the store combing through what he calls "those so-called Easy Tempo compilations from Italy. You know, those psychsploitation movie soundtracks and weird DJ stuff."

Nirvana, Wilco, Counting Crows, Lyle Lovett, the Replacements, Bob Mould -- all of them and hundreds more have made in-store appearances at Waterloo Records. David Fricke, senior editor for Rolling Stone, who makes a point of "one if not two trips" to Waterloo during his annual SXSW sojourn, recounts one of his favorite in-store moments.

"Robyn Hitchcock was playing. I think it may have been '95. Mike Mills played bass with him, and I believe they sang 'Man on the Moon' together. And I thought, 'Man, that's the closest South by Southwest is going to get to an R.E.M. gig, and there it was at Waterloo for nothing. Those are the sort of things that make it not only a local treasure, but a good example for stores around the country -- especially independent stores that are surely struggling in this economy and this music business climate."

It's in this same "climate," where retailers are struggling and the RIAA is suing everyone facilitating file-sharing, that Waterloo is actually on the verge of expanding. They've acquired the lease to the space next door, currently occupied by Waterloo Ice House, and are sub-leasing it back to the current tenants until they can find a new home. Once Waterloo (the record store) takes over the room occupied by Waterloo (the icehouse), it will have 9,000 square feet of space, with the video annex being an additional 2,400 square feet.

And yet for local musicians, it's more than just a place to shop or play the compulsory in-store when their latest album hits shelves. In fact, there's one reason in particular that Waterloo has been such a successful retail outlet: namely its support for the local music community. Which brings us back to Bob Schneider.

Of the 15,000 copies Lonelyland sold, more than 8,000 were sold before Schneider's major-label deal with Universal. That's right, over half the copies were sold when Schneider was just this guy who made this album with no large entity behind him financing it or pushing it after it was done. He had the advantage of being enormously popular locally, and the store had the advantage of being the only retailer locally that Schneider stocked. But for local artists wanting to sell their wares, it's as simple as walking in and saying to store owner John Kunz -- always out in the aisles doing his own stocking -- "Hey, can I sell my CD here?"

Schneider admits that one reason he dealt with the 'Loo exclusively was because he was too lazy to continually stock other retailers. The other was so that he could "hopefully show up on the Top 10 list in the Chronicle once in [his] life." Uh, think you accomplished that last one there, Bob. It's been 16 months running, and most of those atop said list. Vanity aside, though, he's grateful for the store's role in the success of Lonelyland.

"Waterloo has always been really helpful and friendly towards local bands," points out Schneider. "Most stores you have to pay to display product where people can see it easily. Waterloo just does it because they really care about the music and Austin and the musicians.

"It's not about making money and building some vast empire. They embody the spirit of Austin, which is to do something good and still have a good time doing it. Also, I know for me, I can go into Waterloo and find music that I can't seem to find anywhere else. The staff knows what's cool and has great taste, and I always walk out of there with something I've never heard of that inspires me."

Those sentiments are echoed by Fricke, who notes that "the support they give, particularly to local artists, is really admirable. New York has a lot of local artists, and they're not going to get that kind of support across the board in terms of country, rock, blues, folk, experimental, because stores tend to be more specialist here."

It's easy to bandwagon with the successful, but the telling tales comes from how Kunz et al. treat the lesser famous among us. Local singer-songwriter Mike Rosenthal worked at Waterloo for about nine months, what he jokingly referred to as "a rite of passage for musicians." While an employee, Rosenthal released his first album. The store responded by making it the on-hold music for the phones. They also offered Rosenthal a spot on a store listening post -- something almost all retailers charge for -- at what he called "a very modest price."

"I have to believe that sales were better because of their support," asserts Rosenthal. "As far as breaking it down to a number, I don't know that I could. I can think of a number of times, however, when I was at the counter and someone would come up and say, 'Hey, I just heard this on the listening station, it's really g -- Oh, this is you.'"

Actually, "this is you" might be the real reason Waterloo is so successful. Waterloo is by no means unique in a lot of these respects. In fact, Austin has a number of really good record stores -- Thirty Three Degrees and Sound Exchange, to name two -- that have been around for a good long while. But maybe more than anything else, Waterloo's success is due to the fact that it's as much a reflection of people who make up the local music community as it is a store. Better yet, next year it can buy beer.