SXSW is still over, and now so is the new Emo's and the Metro. True Believers are back, though. 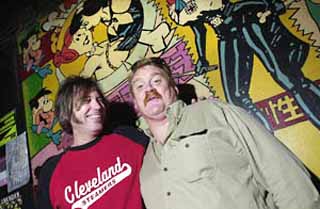 "The TABC wins -- I'm getting out," exclaims Josh Cisneros of the Metro, and there's a sound in the background of the call that sounds like hair being torn out. Claiming that for nine years he's had a great relationship with the agency that governs alcohol sales at clubs, he says he just can't take any more of the incidents that have occurred at the Sixth Street live music venue in the past few weeks. Those well-chronicled incidents include repeated suspensions of the liquor licenses the venue has held, first by missing owner Paresh Patel, then Cisneros himself, and of course the arrests of Cisneros and several staffers at the Metro over the course of SXSW. East Sixth Street Community Association president Bob Woody was originally to have assumed the club's liquor license, but he withdrew that application last Friday. "What I wanted to do was come in with a clean license and allow Josh to continue the booking," confirms Woody, "but [the TABC] told me, 'You're chasing something we're not gonna be able to approve.' I really feel that you need Josh to make it work. It's an okay venue, but he's a great booker." While the Metro's April 12 booking with Motörhead has already moved to the Back Room, look for a few last shows there, including David Allan Coe tonight (Thursday). Naturally, it'll be BYOB.

Hard Rock for the Roses

Well, SXSW 02 gave a lot of people their first taste of the new Hard Rock Cafe, but their grand opening is yet to come. Of course, the venue and music museum has already had its baptism of fire, during the Icarus Line's festival showcase, wherein guitarist Aaron North smashed open a case at the new Sixth Street venue and tried to withdraw one of Stevie Ray Vaughan's guitars from within and play it. Well, in case you're wondering, yes, the HRC are indeed pressing charges in the matter. I'd say that they have a pretty strong case, too, seeing as how the story has been reported all over the planet, and MTV's Web site even boasts a streaming, on-site video of the incident at

. An HRC staffer reports that the guitar was bolted to the wall and its back was torn off in the incident, but it's expected to be repaired and back in its case in the next week or so. That'll be just in time for the grand opening, which ties into Lance Armstrong's "Rock for the Roses" weekend (

) with a monster concert Friday, April 12, at Auditorium Shores, starring the Stone Temple Pilots, Cake, and the Crystal Method. Discount tickets are $10 with Ride and/or Run for the Roses registration, and regular tickets can be purchased for $25 at Star Ticket outlets. Oh, and the Hard Rock Cafe itself is open, too.

In other clubland changes, you may or may not have heard of the new venue Emo's owner Frank Hendrix was planning on opening in the space that once housed Voltaire's Basement. Well, after much last-minute negotiation, the deal has fallen through thanks to Hendrix and his future landlord not being able to agree on the length of the lease. (Hendrix wanted more than was being offered.) So there's no new club coming from Hendrix, but that doesn't mean there's no new Emo's news. Come April 1, there'll be a new general manager at the punk rock haven, none other than former Emo's manager and recent SXSW talent booker David Thomson. Hendrix says he's been wooing Thomson to come aboard, at least on a part-time basis, for a while now. What made him decide to come aboard full time at this point? Those close to SXSW must've seen this coming, but for those who didn't, Thomson has resigned from the music festival and conference. Said departure was effective almost immediately after the last case of Red Bulls were picked up from the Convention Center; Thomson had a long history of frustration with the job of corralling dozens of venues and hundreds of bands for each year's music festival. "I learned a lot about the music and film industries from Roland Swenson and Louis Black," says Thomson, "but I got to the point where it was time to move on." SXSW Creative Director Brent Grulke says no decision has been made on who will take Thomson's place, though one assumes that others in that department, such as Julia Ervin and Emperor Jones Records' Craig Stewart, will now play a larger role in selecting acts for SXSW 03.

You can mock Eric Johnson for his perfectionism, but he's got good reason to pick apart the recently released Ah Via Musicom DVD from Capitol Records. That's an audio DVD, as in the latest beyond-stereo sound product, not a video disc, and I'll let the local guitarist's open letter explain why he's disappointed: "Instead of the intended main guitar tracks, there are 'scratch' tracks in some places. On 'Desert Rose' and 'Trademark,' there are sections where the lead guitar is not in the mix; it's completely absent. A 'rough sketch' bass track was used on 'Cliffs of Dover' that isn't even Kyle Brock playing it, yet Kyle's name is still on the credits! They used some guitar tracks that weren't quite in tune, and more importantly, were never meant to be used. There are doubled guitar parts that weren't supposed to be doubled." The list of flubs goes on for quite a bit longer, but you get the idea. Johnson has since convinced Capitol to let him and studio wiz Richard Mullen remix the DVD and to allow buyers of the 2,500 bum copies trade them in for the new one when it comes out. The bad news? Manager Joe Priesnitz says they've hit a snag in that EMI just laid off 1,800 workers -- including the fella in charge of the project. I'll let you know when the reissuing of the DVD gets back on the rails. In the meantime, anyone wanna bet that the botched first pressings quickly become collectors' items?

For those of you who haven't yet flipped back to the Music Listings, there's a True Believers reunion coming to a Continental Club near you. Seems that as part of Waterloo Records' ongoing 20th anniversary calendar of events, owner John Kunz has persuaded Alejandro Escovedo and Jon Dee Graham to regroup Austin's storied rockers. Turns out that Kunz and former partner Louis Karp put up some of the initial funding for what became the Troobs' EMI debut, and that part of the deal included the band playing a free gig for the store's one-year anniversary. Twenty years later, it's now a trio of gigs -- a private party for Waterloo employees Monday at the Continental plus one-offs at the club Wednesday and another at the club's Houston location on Thursday. "I've been nudging Al on this for almost a year," fesses Kunz... The Gloria Record have sent a schedule of their inclusions in MTV2's SXSW coverage for the next few days. Check out the channel at the following times to see that band and maybe yours: SXSW, 3/25-3/29, 5 & 6pm; Best of SXSW, 3/30, noon-2pm; They Came From SXSW, 3/30, 2pm... Local noise kings Zulu as Kono will be playing their last show for at least six months this Friday at Emo's. Drummer Tyler Harwood, also Brown Whörnet's lead vocalizer, is moving to San Francisco in search of a more exciting experimental/noise scene... Next time you're in San Antonio, head over to Casbeers at 1719 Blanco Rd. There you'll find a marker engraved with an outline of the state of Texas, tornadoes, a guitar, and a gold star. Kevin Kosub of Kevin Kat Records is responsible for the piece, and in case you haven't figured it out, it's a tribute to the Texas Tornado himself, Doug Sahm... Remember the "treasonous" Jimmie Dale Gilmore bit I referred to last issue? Check out the whole story at the following URL -- it's damned amusing:

... Don Walser is apparently back onstage, if not literally back on his feet, and can be found playing at his usual haunts... Finally, Speedy Sparks is alive and well. I say that just in case the news of Thundercloud Newman member Speedy Keen's passing gets twisted somewhere down the line. Call up the operator, because there's something in the air...