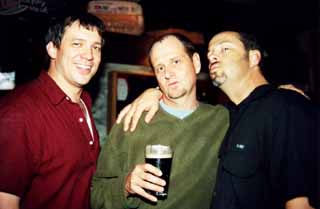 Yup, yet another wild and woolly South by Southwest, with people teeming and music non-stop every place you could stuff it, from dusk 'til dawn Wednesday through Sunday. Of course, that's not to say that everything went as planned. Sure, there were dust-ups, like the singer from the Icarus Line smashing the display case of a Stevie Ray Vaughan guitar at the Hard Rock Cafe and bolting out the door to freedom. There were the standard troubles with the fire marshal, like Wednesday at the Red Room when capacity was officially cut 60% due to a blocked exit (no, I don't understand why they couldn't just un-block said exit, but I'm no fireman). There was also the notable misplacement of artists, notably the invisible Norah Jones show at the tiny Clay Pit. Just for the record, Jones insisted on playing the Clay Pit after coming to town prior to the conference and falling in love with the venue/Indian restaurant.

Registration was of course down 15% from last year, but that was no surprise since a drop was expected due to music business woes and the remnant fears from 9/11. On the other hand, SXSW Creative Director Brent Grulke asserts that attendance was up on Wednesday, Friday, and Saturday. It seemed to this writer that much of that increase may have been in single-ticket attendees rather than wristbands, though no figures are yet available. As far as whether people were taking unfair advantage of SXSW being lax about showcasing bands playing other gigs, Grulke says he didn't really notice that happening, but if it did, "it may have been that we had less time to root that out this year." He adds that it's far too early to expect any news about bands getting signed or otherwise profiting from their SXSW showcases, and says there's plenty he needs to let settle before he can say any more about this year's conference. "For everybody else, it's over," he sighs weakly, "but for us, it's not. As far as cleaning up and assessing what worked and what didn't, we're still figuring it out." What that means is, stay tuned and keep reading this column in weeks to come -- or trot down and buy Grulke a drink at Opal Divine's sometime.

First, the ugly part. It seems that one Courtney Love, slated for a SXSW panel on Saturday, didn't take too kindly to reading my recounting of her behavior on a previous Austin visit. That ran in the Friday edition of the daily Chronicle and apparently she ran across it almost immediately upon arrival in Austin and took it upon herself to throw one of her well-known publicity-grabbing tantrums. This did not endear me to the SXSW staff, as they didn't realize I'd planned this to ensure that she would get her requisite fit out of the way by Saturday. It worked, too, and her speech at the Convention Center was reportedly one of the highlights of the conference; one person in attendance described it as "slurred but intense." Of course, the fact that Margaret Moser presented her with an apology gift of roses on behalf of the Chronicle helped ensure that Love didn't run off early. "As rambling and entertaining as her panel was," Andy Langer reports, "the backstage show afterward was the real show." That, according to Langer, is when she threatened to cancel her on-camera interview because of what she deemed improper lighting. Instead of leaving, however, she dropped to her hands and knees and spent a half-hour cutting gels and plotting her own lighting diagrams, then set up Moser's flowers as a backdrop before finally declaring things a go. The segment runs throughout the day this Friday on News 8.

Among the other memorable moments that either occurred or came to my attention on Saturday: The Metro situation continued to go from bad to worse. On Wednesday, if you recall, the venue received a citation for illegal drink specials, and on Thursday new boss Bob Woody's liquor license was revoked, no doubt in connection with the previous evening's mix-up. (Woody said he was unaware the specials were unlawful.) Friday night, I'm told, former owner and current booker Josh Cisneros got led off to the pokey along with an unspecified number of staffers. Surprisingly, the venue was open on Saturday, though with its showcases full of soda pop drinkers. At least nothing exploded at the Metro.

Down at Elysium, midway through a hot set by Japanese act the Salinger, things got too literal when a portion of the P.A. burst into flames, resulting in a partial exodus from the building as smoke billowed through the room. As when a girl was injured a few days earlier at the Mercury, Dr. Ron Byrd of Prescott Curlywolf was again in attendance, but apparently there were no cases of smoke inhalation that required his attention. My old friend Harvey Sid Fisher had his annual backup singer troubles, as the all-star team of Leeann Atherton, Libbi Bosworth, and Shelley King backed out on him at the last minute, Bosworth claiming "he was such a rude jerk that we all walked out of rehearsal." I find that hard to believe, but in any case, Fisher offered the job to fan after fan as they approached him for autographs and such. Mere hours before his showcase, some Ruta Maya folks got him in touch with a couple of young ladies, who did a bang-up job. For her part, Bosworth's having surgery for her voice soon, so her gig with Susanna Van Tassel tonight, Thursday, at the Continental Club is the last you'll be hearing from her for a while.

Meanwhile, during the Thrilla at the Dilla Festival at Threadgill's World Headquarters, Jimmie Dale Gilmore and Butch Hancock joined the former's son Colin Gilmore onstage Saturday for a version of "White Freight Liner," before jetting over to their Flatlanders showcase at the Mercury. A member of Colin's band says, "It was a cool little treat for the crowd at Threadgill's." It was a cool little treat for me when a Houston Press writer passed along the story of how Jimmie Dale recently announced at a show he was a "traitor" who hated Dubya. Afterward, Gilmore met up with a right-leaning fan, who offered the musician back all the CDs he'd bought over the years when he assumed they were kinsmen.

There were a few scattered cases of hecklers making for less than optimum showcases, but Robert Harrison of Cotton Mather tells me that his band's Friday night set suffered from a slightly different problem. It turns out that our favorite Hollywood TV producer, The Education of Max Bickford's Rob Thomas, came to the show with a batch of burly friends and dominated the front row during the power pop performance. Poor Harrison laments that he couldn't see beyond them to the females in the crowd, "and I had to sing all my love songs to Rob!" Well, Robert, at least you were courting a rich man.

It took me until Saturday to find out exactly why Squat Thrust troublemaker Jimmy Bradshaw left me a voicemail message earlier in the week demanding I tell the world that he has declared war against the Gingerman. Bradshaw says he wants to fight the entire staff of the beer haven, and they will be allowed to arm themselves "with sticks, clubs, chains ... no guns!" Pong's Jason Craig tells me (as I suspected) that the bar had refused Bradshaw entry earlier in the week due to his advanced state of inebriation. A couple weeks before, coincidentally enough, Bradshaw had told me that he'd been approached to fill in as guest vocalist if JJ Offender didn't make the Offenders reunion show. Well, JJ did indeed show up for that gig, but not for the SXSW showcase that followed. As news spread through the crowd that JJ had gotten himself tossed in jail -- where he probably looked around and thought he was at the Metro -- another true believer of the Offenders, Jeff from Buzzcrusher, took his place and did a damn fine job -- better than that little fella the Dead Kennedys picked up, I'd say.

Well, the world keeps turning, and more music is, as ever, on the horizon. The Old Settler's Fest in Round Rock comes up next month, April 19-21, with guests such as Michelle Shocked and the Del McCoury Band. One assumes at least one Bob Marley fest or another is sure to come along soon, but for now, looks like a trio of String Cheese Incident shows, April 4-6 (one of them featuring the D, Tenacious D), and the Rites of Spring show, April 7 (Lit, Custom, Dishwalla, etc.), have Waterloo Park all sewn up. In general, there will probably be some music festival of one kind or another each weekend throughout the spring until it gets too damn hot to mount an outdoor set without suffering heat stroke. And just because the Austin Music Awards are past, that doesn't mean there's not other awards coming down the pike, either. At the Continental Club this very Saturday, the 26th annual EDDY Awards will feature the Uranium Savages as always, with Yellow Rose manager Don King getting a lifetime achievement award for most successful club operator (read alcohol sales) for 20 years in Austin. Maybe the Metro should give him a call. On a sad note, someone at Cedar Street reports that their 26-year-old door man/local music scenester Michael Gleason was killed in a motorcycle accident the Thursday of SXSW. A remembrance party will be held at the venue this Sunday starting at 6pm. Finally, from RoadStar's Luis Zapata comes the (unsolicited) news that "rock shows [have been] declared cultural events in Peru. Thus, from now on rock concerts are tax exempt." Hmmm. Maybe there's a way for SXSW to keep costs down next year...
More Dancing About Architecture columns