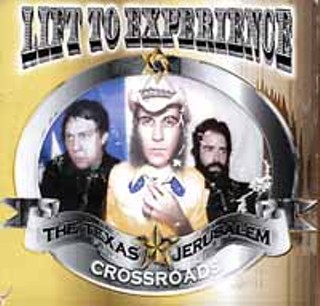 The Texas-Jerusalem Crossroads (Bella Union) Christian space rock. Lone Star emo. Confession-booth shoegazer. There's never been a band like Lift to Experience, no doubt about it. The album cover is goofy, and the idea sounds cracked: a 2-CD concept-album debut about Texas being the promised land, released on a British label (run by ex-Cocteau Twins). Preconceptions become moot, though, when Josh T. Pearson opens his mouth. This Denton, Texas, ex-ranchhand and son of a Pentecostal preacher conducts a personal sermon of the apocalypse, quoting freely from Revelations, alluding to swords, guns, justice, and angels. Yet humility is ever-present in his moving voice, and his tales of spiritual ascent and redemption have a hymnal quality to them, both the quiet ("Down Came the Angels") and voluminous ("Falling From Cloud 9"). Pearson coaxes such an angelic maelstrom out of his guitar and rotating Leslie amp, it's as though he's conjuring the very spirits he addresses. The ferocious skinwork of Andy "the Boy" Young lends a visceral, Swans-like intensity, but the ethereal axe-grinding shows that Pearson has spent time at the altar of Kevin Shields. Still, Lift is proud of their heritage, cutting the album's gravity with absurd allusions to Lone Star spirits. Standout "These Are the Days" is a chilling post-9/11 listen: "The whole world is gonna change when the levee breaks, and it feels the wrath of God's terrible, swift sword." And in case you didn't know: "We're simply the best band in the whole damn land ... and Texas is the reason." Amen. (Saturday, March 16, Red Eyed Fly, 1am)