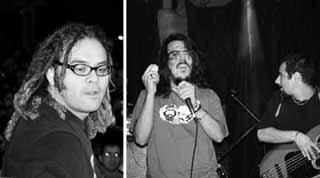 The Vibe, Friday 15 Kudos to Austin's Latino Rock Alliance for another fine showcase. Monterrey seems to be the current hot spot, with half of the evening's bands hailing from that North Central Mexican city. After Monterrey's La Verbena Popular started things off, a brightly dressed unlisted trio took stage, resplendent in bright orange stage gear and augmented by sequenced blips and samples. Despite brief technical problems, the bass-guitar-drums trio was fun to watch. Halfway into their slot, it turns out the trio was Joselo's backing band. With Esquivel-esque thick glasses and brown dreads, Joselo is the guitarist for Mexico City collective Cafe Tacuba, in town to play his own songs. More sound difficulties prevented Joselo and his acoustic guitar from joining, so the Liquids tried their best to keep the mid-sized crowd up. The quartet's first few tunes fell flat, and it wasn't until a later instrumental that they hit their stride. Joselo then brought out a singing bandmate from Cafe Tacuba to take lead on a truthful version of the Pixies' "Here Comes Your Man." Overall, it seems as though Joselo was shooting for something like David Byrne's solo work, but it didn't quite reach that orbit. As the clouds overhead started to break and reveal stars, the outdoor stage of this Sixth Street club filled up as Monterrey's Genitallica readied their gear. The twentysomething fivepiece of drum, five-string bass, two emcee-style vocalists, and Marshall-stacked guitar came out swinging, putting forth their youthful and tight mélange of funk, metal, hip-hop, and rock. And as their name implies, Genitallica are fans of a naughty good time. Think Cypress Hill soaked in Seventies arena rock. These hombres can play, throwing in segues of soca and ska to keep things interesting, and leaving the stage hopping, as no fewer than eight ladies danced onstage for their final number. The unique stylings of South American spinsters Sindicato Argentino del Hip Hop came next, followed by Monterrey's Ki and Ky, and deliciously capped off with Grupo Fantasma, Austin's smokin' Latin big band. Kudos, Latino Rock Alliance, kudos.