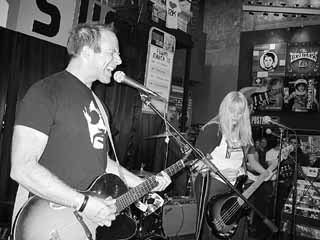 Tower Records, Friday 15 Sometime near the end of their afternoon set, Imperial Teen's Will Schwartz looked up and noticed the huge, promotional eye-catcher for the band's upcoming Merge album On gracing the Tower wall. All four band members beamed with delight. Then they noticed the promo was next to a display for a Kiss box set, which rocks. Below that hung a big Eagle-Eye Cherry display, which does not rock. "Who's this Eagle-Eye Cherry dude?" asked Roddy Bottum. Cheap laughs. Don's son and Nenah's brother always makes for a good punch line. Surrounded by nothing but gushing fans, and with their post-major-label rebound album getting a nice display before it's even out, Bottum's remark brings to mind something Ice Cube once said: It was a good day. "Bow down to me, bow down yeah baby baby!" sang all the quartet in unison during "Water Boy," and the full house responded in kind. It's been nearly four years since Imperial Teen's sophomore Island album, What Is Not to Love, but the adoring public hasn't forgotten about San Francisco's oldest teenagers. Will Schwartz, Jone Stebbins, Lynn Perko, and ex-Faith No More keyman Bottum have all paid their dues, but the years haven't dulled their bubbly sparkle one iota. While the crowd ate up the gender-blurring standouts off debut Seasick and near-hit follow-up "Yoo Hoo," it was two new songs that stood out. On opener "Ivanka" speedily built to a peppery crescendo, while standout closer "Million $ Man" featured bionic drum fills by Perko that would've done Steve Austin proud. The song's (and set's) lasting image, though, was Schwartz's robotic jig, which brought to mind the sleek/chic automatons on the What Is Not to Love album cover. Preaching to the converted really ain't a bad gig.