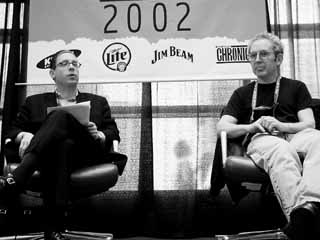 Austin Convention Center, Friday 15 Peter Guralnick, the leading historian of American vernacular music, proved to be as fascinating and thought provoking as a speaker as he is a writer. While Texas Monthly Editor Evan Smith's questions seemed routine, Guralnick, author of bestselling Elvis Presley biographies Last Train to Memphis and Careless Love, provided a great deal of background into his methods, or more accurately, the lack of them. He made it appear, through his stories on Sun Records' Sam Phillips and Presley's manager Colonel Tom Parker, for instance, that being in the right place at the right time was as important as putting the words down on paper. "It's both exciting and difficult," declared Guralnick. "The outline of what I'm going to write changes page by page." He also gave the surprising background information that his Presley biography was supposed to be one volume, but in the middle of writing it, he discovered that it was obviously much bigger than that. His next book will be about soul singer Sam Cooke, and Guralnick shared a couple of intriguing anecdotes about what he's discovered in the process this time, including one about a young Aretha Franklin. With a man of so much knowledge and experience, the audience could have listened to him talk for much longer than the time allotted, but it was fascinating to listen to his insight and recollections no matter how long it lasted.