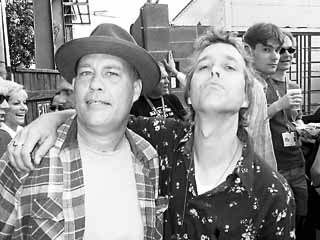 Club DeVille, Thursday 14 Standing in the midst of it all, I had to wonder whether the gaggles of spectators had any idea of the musical history represented by the New West roster on this day. Guitarists Stephen Bruton and Chuck Prophet have had career enough between them for at least a dozen people, and their sets were as polished and professional as could be. After Prophet's set of dark roots pop, the newest New West artist took the stage: Vic Chesnutt. Chesnutt was invisible to most of the crowd, sunk in his wheelchair and poking up only as a floppy striped hat from under his warbly sweet invective. Up next, Jon Dee Graham, as big a part of Texas music in this town as anyone, treated the gathering to a half-hour of cloudy, blues-infected rock. Graham was on this day, wresting deep riffs from his guitar and growling out the words to a few of his own new tunes. Graham had a sense of the history behind the day, and he was as smirkingly irreverent of the conference as he was appreciative of his own situation. After a few poignant comments on the "Desperation Derby," as he terms SXSW, he said, "I'm already on the best label there is, so what do I care?" One couldn't help but read a bit of vindication into it when he referred to New West as "the only people out there who will let me keep making records." Then came the Flatlanders. More legend than band my ass. These three guys, Joe Ely, Jimmie Dale Gilmore, and Butch Hancock, have as much or more to do with the course of music in this state as nearly anyone, and ever since they decided to bring their own disparate and accomplished careers together for another shot at this band thing, they've only gotten better. New Flatlanders tunes alongside old Flatlanders tunes were gorgeous, intelligent, and exactly what everyone wanted to hear. And, of course, honoring the man that got them all into making music in the first place, Joe Ely said, "It wouldn't be complete unless we played a Townes Van Zandt song" whereupon they broke into "White Freightliner" and carried the crowd away. By this time, I think everyone in Club DeVille's beer garden had an idea of the history behind what they were seeing and hearing. And they liked it.