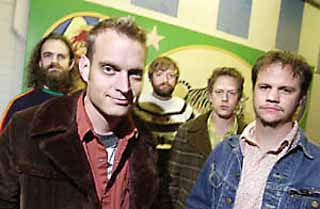 "Butter. It's about half a tablespoon of butter on there."

For some unexplained reason, Matt Kinsey, guitarist and handler of one-third of the vocal duties for Austin's Li'l Cap'n Travis, breaks out an Olympic pin. This is not completely bizarre, because the Olympics just ended. This particular pin, though, is in the shape of a baked potato. Seriously. It's a bona fide Olympic trading pin, still in its packaging, official Olympic seal and all.

"My friend Jimmy went to the Olympics," recounts Kinsey. "People trade 'em. They have all different kinds. I guess the food ones are real cool to have. They've got others that are green Jell-O. It's like a thing you take back to Korea."

So, as everybody is looking at the potato-shaped pin, another band member raises the question as to whether the colored substance on the top is supposed to be cheese or butter. That's when Gary Newcomb, the outfit's pedal steel player, chimes in that not only is it butter, he knows exactly how much butter.

Maybe that explains Li'l Cap'n Travis better than anything, because other attempts to do the same often end up not making much sense. Kinsey, in fact, raises a mild protest that they're barely a legitimate band. It's a self-effacing quip, but they're all that way. All five members find a way to crack a joke about the fact that their second album, Lonesome and Losin', has spent four weeks on Waterloo Records' local Top 10, and that all four weeks, it's been parked in last place.

But don't take the bait, because musically, where it matters most, Li'l Cap'n Travis is a band that has found the perfect hybrid of American pop and Americana, a band that can be ironic and sincere at the same time, where sweetness and sarcasm share the same lines. It's like butter.