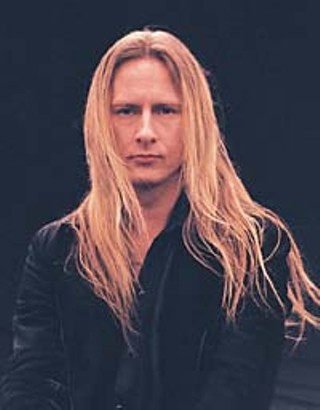 If there was ever concern about Jerry Cantrell's career as a solo artist, the fear was allayed when his 1999 solo debut Boggy Depot went platinum. Chief songwriter, guitarist, and master of Alice in Chains' booming sound, Cantrell is about to repeat that success with a new label (Roadrunner) and a new solo album, Degradation Trip.

Cantrell rolled out of bed around noon one February morning, ensconced at his heartland ranch "somewhere near Texas," he noted coyly, the sound of a morning cigarette being inhaled. The country seems an unlikely setting for an urban act like Cantrell, but he finds personal contentment there.

"There's something about it that feels useful," he ventures, "taking care of horses and cows. It's very peaceful to come back to the farm."

If Cantrell's got the heart of a country boy, his soul is in the city. Growing up in suburban Tacoma, Wash., south of Seattle, teenage Jerry hung out at Spinning Wheels Roller Rink, listening to the music of the day: metal.

"I am the least punk rock guy, musically, more a classic rock kind of guy. Listening to Maiden, Priest, Sabbath, Van Halen, AC/DC. You can hear that in my music."

With 25 songs written for the new CD, Cantrell scaled back to 14 tracks, noting that all of the material will come to light eventually. Indeed, Cantrell's cautious approach has paid off since the early days of Alice.

"I can honestly say that the state of music today reflects some of the things going on in Alice. I am lucky enough to have a unique sound so the music stands on its own. I don't think there's anything out there like what you're going to hear on this record."

And he's got a wee bit of country in him, which Cantrell attributes to his Oklahoma father. Might there be a country album hiding within?

"My dad says, 'Boy, you should do a country record sometime. Kenny Rogers did that, and he used to play rock & roll!'"

Just think, in 20 years we could be watching The Gambler VIII, starring Jerry Cantrell!