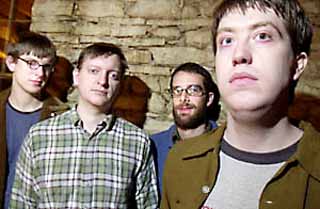 With a new Okkervil River album and a just-completed tour, as well as a SXSW showcase and second tour on the immediate horizon, one would think that Will Sheff, singer and guitarist for Okkervil River, has more than enough to do. He also writes for this paper's Screens section, and the Audiogalaxy Web site. His other band, Shearwater, plans to tour as soon as the dust settles from the Okkervil activity.

"I think if I get one more part-time job when the tours are over, I'll be set," says Sheff.

That's what it's like to live and make music in Austin nowadays. If anything can break the merciless cost-of-living cycle, it's Okkervil's new release, Don't Fall In Love With Everyone You See (Jagjaguwar), a richly instrumented collection of songs that filter all manner of American music through a keen and unforgiving songwriter's mind. This is folk like you haven't heard it before -- ominous but accessible.

"The first album [Stars Too Small to Use] was stark and angular," says Sheff. "We've always wanted to scare people and make them a little uncomfortable, but this time we wanted to do that in a more sophisticated way, make there be beauty and comfort, then shoot it through with disquiet -- with off-putting and strange elements ...

"We decided to make this record the way we've always wanted to sound, with horns and strings, like soul music. That was the goal this time around, to make a record that had that embrace, that sounded like it was reaching out and giving you a hug."

And hug it does -- mercilessly, lovingly. The scarier side of folk and bluegrass has never been so appealing. Don't Fall in Love With Everyone You See grows on you like Spanish moss, beautifully, overwhelmingly, undeniably, and possibly fatally. Enjoy it at your own risk.

Don't Fall in Love With Everyone You See, Stars to Small to Use, Jagjaguwar, Will Robinson, Okkervil River