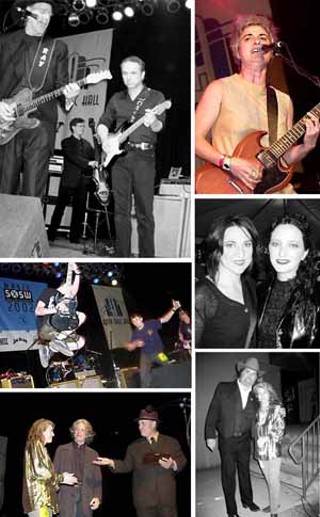 It was set to be the perfect show. The lineup for the 20th anniversary of the Austin Music Awards was balanced to represent the broad diversity of the Austin music scene, pulling together artists that made up its past and hope to be its future. From openers the Snobs, a local quartet of skate-kids gone hardcore, to Asleep at the Wheel, the embodiment of Texas swing, all present were in store for a true taste of what music in this town is all about. Okay, so there were some problems. This is a huge production with a multitude of changeovers of musicians and instruments and a constant stream of people working their way across the stage. Something's bound to get screwed up. To start things off, Jody Denberg wasn't there to hand off KGSR's giant check to the SIMS foundation. He did show up after the first set break, and handed the local nonprofit agency, which provides affordable health care and counseling to the music community, a check for almost a quarter of a million dollars. So things worked themselves out. Host Paul Ray, at first befuddled by the mixups, slid into form and kept things moving along nicely. The Snobs started off by unleashing a speedy set of skate-punk energy on an unsuspecting crowd. Though initially shocked at hearing a preteen shout "motherfucker" so many times, the appeal of three youngsters pulling Eddie Van Halen kicks at every opportunity was too much to not enjoy. All-around skin-beater and mojo man Mambo John Treanor was honored posthumously for his contributions to Austin music, and his mother accepted the award, shuffling onstage in her little black dress and winning the hearts of all in the room. Then came Lord Douglas Phillips to kick off the Supergirls segment of the evening. The trio tore through a punk number before handing off to Patrice Pike, who, with amazing efficiency, turned the chaotic punk affair into a well-oiled radio rock band. It was an amazing transformation. A few more notorious local gals and an appearance by Nancy Scott rounded out the circus after an unusually long set. Which must have been responsible for Spoon's unusually short set. The local indie trio (here a foursome with keyboards) were crisp and tight, running through four new tunes before abruptly leaving the stage. No one was ready to applaud, so few did. When local singer/cult hero Toni Price won AMAs for Best Female Singer, Album, and Song of the Year (the last for Shelley King's "Call of My Heart"), the crowd woke up and thundered. Price even got a birthday cake and a venue-wide "Happy Birthday to You" to mark the occasion. Now, it was starting to feel like Austin. There was a running commentary on the part of the award winners on how great a town this is and what great support the musicians get and how great the music here is, but it was evident to this point that most in the audience were not so impressed. Toni Price cast a ray of hope, and though Sixpence None the Richer didn't exactly bring the joint to life, they didn't kill the mood either, their light and shiny alternapop keeping most folks interested at least. When the time came for the tribute to Champ Hood, local fiddler and sideman of legendary stature, all present were primed and ready to hear some true Texas music. And Champ's son Warren, leading the South Austin Jug Band, was ready to oblige. Only the sound didn't work. It was a good 10 minutes of messing around before the bass and guitar got juice, and then the bass crapped out during the first song. Though the second tune didn't exactly warrant keeping the likes of Toni Price and Lyle Lovett, the evening's surprise guest, waiting, it did get the kinks out and warm the band up. Price, reading lyrics, finally did what no one else had done -- she got undivided attention. People were transfixed. Her voice was as rich and smoky as her love of the song and its writer. Then came Lovett, whose guitar wasn't working. He brought his cello player out for a quiet version of another Champ tune, and the cello didn't work. Somehow, it still sounded great, and Lovett & Co. got two good songs in before the Threadgill Troubadours put in a glitchless appearance. The evening's climax with Asleep at the Wheel would have to go on without this reporter, who has stringent daily deadlines to meet, but one can only guess that they maintained the momentum and played an amazing set including many or all of the evening's other special guests. Ask around.