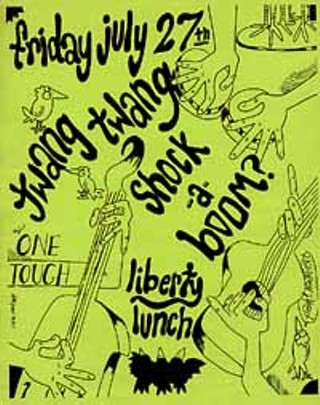 He may be off Atlantic Records, but the sunny Pacific Ocean doesn't seem to be doing songster Davíd Garza any harm. Garza hasn't even been an official resident of Los Angeles long enough to get the prefix changed on his cell phone, but he's already landed residencies and assorted other gigs along the Left Coast, from L.A.'s Largo to some place in Seattle. I say some place, because Mr. Garza and his cell phone were experiencing the worst of L.A's hill interference during the five (!) calls he made to the Chronicle in rapid succession Monday. Since previous attempts to get info out of his management made his cell phone sound like a megaphone in comparison, I tried another tactic. Turns out the only way to get a straight answer out of Garza was to talk to one Chepo Peña, who hasn't seen him in months. Pena, along with local dwellers Nina Singh, Mark Addison, and Sean Mullins, are Garza's Austin band, one of at least two outfits he keeps on hold in ports around the nation. According to Peña, Garza's "doing well," getting lots of new material written and enjoying his residencies. As far as the band, Peña says they all "play together really well," despite the fact that they have to rehearse by listening to Garza's CDs in anticipation of the man himself coming down to Austin town for a bit of a visit. Garza's doing that on Tuesday for a gig at the Steamboat, and a new indie CD from Garza should be available to those in attendance as well. Peña's looking forward to the gig, as he's currently down to a career low of playing in only two other bands besides Garza's. What would Peña do if he lost the Garza gigs? My guess is he'll go back to doing what he did back when Garza was still fronting his trio of UT darlings Twang Twang Shock-a-Boom. What was Peña doing back then? Same as everybody else, he admits: "I was talking shit about them because all the girls liked them."