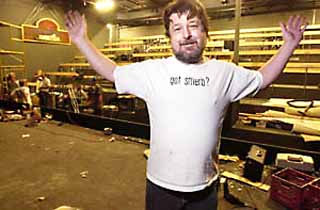 Since it was first announced here months ago, local music scene tongues have been wagging about Danny Crooks' chances for success with the new Steamboat at Riverside and Congress. The 'Boat was previously sunk when its home on Sixth Street was bought out by an establishment with another watery name -- the Aquarium. The spot Crooks has chosen for the club's relaunch is considered cursed by many, having seen many promising businesses come and go, with the Bad Dog Comedy Theater being the latest victim of the highly traveled corner. If things don't work out at the new location, it certainly won't be for lack of trying. On Monday, with four days to go before Friday's big opening, the new Steamboat was abuzz with activity. From the entry area, which appropriately enough looks like a scaled-down version of the old Steamboat, to the massive auditorium where some 600 people can enjoy local and touring bands of all flavors, there were people running around doing last minute repairs and renovations, hanging lights, checking the sound system, and even, er, testing the pinball machines and video games to make sure they're working correctly. Among the special touches Crooks is promising for the opening 10 days of the new Steamboat is a special screening of Steamboat: Beyond Sixth Street, Brian Watkins' endlessly in-the-works documentary of the last 10 days of the old Steamboat. The 30-minute abbreviated version will feature the usual Steamboat suspects like Joe Rockhead, Pushmonkey, Van Wilks, Soulhat, and such, and of course Friday's headliners Vallejo. Watkins promises a very special effect regarding the showing of the film -- one that should kick so much ass if it works that I promised not to reveal anything about it here. You'll just have to go see for yourself, won't you? With an opening lineup that includes Pushmonkey, MC Overlord, and Shandon Sahm on Saturday, Stephen Doster's Beatles tribute Sunday, Davíd Garza on Tuesday (see below), Patrice Pike on Wednesday, and Blue October on Thursday, that shouldn't be too hard.

South by Say What?

Burden Brothers, Bad Chopper, Chris Brokaw, the Delphines, Eddie Spaghetti, Sparta, Pat DiNizio, Mark D, Dead Low Tide... the list goes on. Close to 1,000 bands are playing SXSW again this year, and many names may ring a bell, but not quite set off the alarm. Hell, that's understandable -- there's probably still a number of people out there in the world at large who may love Joe Ely, Jimmie Dale Gilmore, and Butch Hancock, but still haven't figured out exactly who these Flatlanders folks are. I know wristbands don't grow on trees, and you wanna make sure they're worth your $85 (that's at all Star Tickets outlets until March 1, or 4,000 are sold, whichever comes first -- after that they're $105), so here's some handicapping help. Previously, this column advised you that the Burden Brothers was the new project between members of the Toadies and Rev. Horton Heat's irrepressible combo, but now allow me to remind you why the other above names may be familiar: Bad Chopper features C.J. Ramone (expect to find at least one other nonperforming ex-Ramone roaming the streets during SXSW, producer Tommy Erdyli); Chris Brokaw is the guitarist for Come; the Delphines of course feature Go-Go's guitarist Kathy Valentine; Eddie Spaghetti is in the Supersuckers; Sparta is half the remnants of At the Drive-In; Pat DiNizio you may recall from the Smithereens; Mark D is formerly one of the Melvins; Dead Low Tide is more or less the Murder City Devils plus half of godheadSilo; and Original Sinners is ex-X-er Exene Cervenka's new experiment. Oh, and one more thing. Yes, the Dead Kennedys listed as playing SXSW 2002 are the real Dead Kennedys -- with the exception of singer Jello Biafra, replaced by Brandon Cruz, who played "Eddie" on The Courtship of Eddie's Father. What a world, what a world!

You may be asking yourself why last Sunday was proclaimed to be Bob Dylan Day in Austin. Was it because Bob credits local folksinger Carolyn Hester for getting him his debut recording contract at Columbia Records? Could it be due to the fact that Dylan's first public appearance with his touring band the Hawks (who later decided that the Band might be a better name) was in Austin? Wrong on both counts, says scene fixture Gavin Lance Garcia. Garcia claims it was he who instigated the deal and pressured Mayor Pro Tem Jackie Goodman into presenting Dylan with the key to the city and all sorts of related honoraria, because of one simple fact: "They gave one to Kenny G for Christ's sake!" In return for his efforts, Garcia says he got the honor of having Dylan, who was wearing a big black 10-gallon cowboy hat, think that he was in fact the mayor of Austin, and after the confusion was cleared up, Bob was heard to say that he considers himself to be a citizen of Texas, since George W. Bush declared him an honorary citizen of the state back when daddy was prez and Dubya was merely guv. Added Dylan, "as long as I'm a citizen of Texas, I might as well be one from Austin!" As far as what happened to the key itself, Garcia says the last he saw of it, it looked like it had gotten into the hands of Charlie Sexton's kids, and as far as he knows, it's probably at Charlie's place by now. (For those of you completely out of the loop, Sexton's been one of Dylan's guitarists for quite awhile now.) Asleep at the Wheel's Ray Benson was in the wings during much of Dylan's tour-ending performance at the Erwin Center on Sunday, but since the latter had to catch a plane to L.A. almost immediately afterward, sadly, there were no after-gig visitations to report. According to a few staffers around here, the gig itself was mostly uninspired, both in the set list and performance. (The Dallas show on Friday was apparently much better.) In fact, from what I hear, Spencer Gibb's rendition of the rather obscure Eric Clapton/Dylan gem "Sign Language" at Jupiter Records' raucous Dylan wingding on Friday may have been better than the whole of Sunday's show. As for the ever-informative Benson, who's received the keys to two cities himself over the years, he points out that in reality, Austin's so-called "keys to the city" don't unlock anything, though they do serve a function -- they're bottle openers! "I can't believe no one's ever noticed the symbolism," puzzles Benson.

A reminder that tickets for the Austin Music Awards are also on sale, at Star Tickets (469-Show), $20 advance or $25 day of show. Just added are fiddle legend Johnny Gimble and Strat king Jimmie Vaughan to the Asleep at the Wheel headlining set... This weekend, don't forget, is the second half of the benefit/CD release at Room 710 for their local Independence compilation disc. Pong, Honky, Brown Whörnet, Spiders, HeKill 3, and a bunch of others are on the CD, so check the club listings to see which of the 19 bands on the disc are playing this Friday and Saturday... Cock(ney) an ear for Jody Denberg's interview with Billy Bragg this Sunday, 8-10pm, on KGSR. The bloke's new album, England, Half English, featuring Austin's own Ian McLagan, is out now and sure to find a local audience... L.A. Lloyd's locally produced music countdown show Rock 30 has signed a deal with the Excelsior Radio Network. Lloyd's program, a three-hour weekly show to radio stations across the United States, is a rock version of the Casey Kasem classic, with 10 less songs per countdown and a guarantee of no long-distance dedications to a dog named Snuggles... I'm not sure which is more baffling -- finding an article on Trail of Dead in the new Vanity Fair ("singer, guitarist, and part-time drummer Conrad Keely bears an eerie resemblance to the young Don Ho") or spotting a story on Jimmie Vaughan in the latest Juxtapoz, a mag that usually profiles the likes of artists Robert Williams or Frank Kozik. Vaughan rates the feature simply for owning his "kandy-green kustom kaddy"... Looks like the Hard Rock Cafe is opening its doors this Friday, with its first live music programming scheduled for Monday. "High Tech & Hard Rock," 7pm-midnight, features six local acts with ties to the high tech community: Plush, Stickpony, Brotha Magnum, Casamar, the Atlantics, and Planet Zorn. No word on whether bands will be performing with real instruments or high tech gizmos!