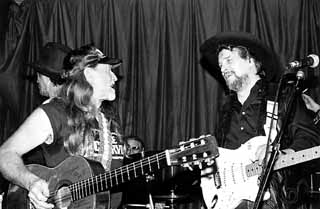 Willie and Waylon at Antone's, 1993 (Photo By John Carrico)

"I've always felt that blues, rock & roll, and country are just about a beat apart." Thus reads the introductory quote on www.waylon.com, the Web site for a good ol' boy who was so well known he didn't even need to use his full name in the URL. Littlefield, Texas, native Waylon Jennings, who passed away Feb. 13, was indeed a beat apart in many ways. There couldn't have been much more than a heartbeat between yes and no in the decision he made to give up his plane seat to J.P. Richardson on Feb. 3, 1959. As a result, Jennings outlived the Big Bopper -- and Buddy Holly and Richie Valens, for that matter -- by over 43 years. Born in 1937, Jennings lived to see Buddy Holly's Lubbock rock sound influence the Beatles into changing the world of pop music forever. He saw to it that some much-needed pocket money got put in the hands of Texas musicians and songwriters like Billy Joe Shaver. He made it to not only his own 60th birthday, but also to pal Willie Nelson's in 1993, where his surprise appearance and duet with the birthday boy on "Mamas, Don't Let Your Babies Grow Up to Be Cowboys" at the formerly Drag-bound Antone's was one of the big moments of the evening. He saw Willie, Kris Kristofferson, and the boys make music and movies, and he even had a hand in that silly ol' Dukes of Hazzard. He lived to see country music go through infinite permutations, all the while staying atop the heap. He even lived to hobble onstage at Waterloo Park last March 31 for a final local gig (austinchronicle.com/issues/dispatch/2001-04-06/music_live3.html ). And finally, amazingly enough for the boy who sat and cried that day over the news that his friends and bandmates had died in that horrible plane wreck, he made it all the way to the 21st century, where his name was on a Web site even as his music still played over truckstop speakers. A beat apart indeed.