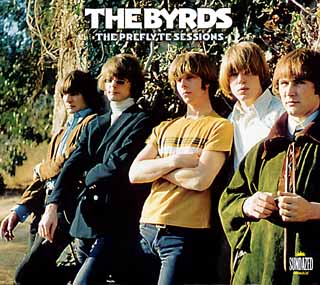 The Preflyte Sessions (Sundazed) Roger McGuinn has come full circle. The Chicago native who began his career in the early Sixties as a picker for sweater 'n' turtleneck folk-pop acts like the Limelighters, Chad Mitchell Trio, and even Bobby Darin, now tours solo with only his wife, his Rickenbacker, and a satchel full of American roots music. The seeds of McGuinn's still-underappreciated link in the rock & roll evolutionary chain, the Byrds, began hatching in the so-called "Folk Den" of L.A.'s Troubadour, where restaurant buskers like David Crosby kept their nontraditionalist leanings to themselves. McGuinn, Crosby, and another Trou-blue folkie, Gene Clark -- onetime member of the New Christy Minstrels -- fell into harmony one day, and a sound was born: the Jet Set. A band publicity photo in the 50-page booklet to The Preflyte Sessions finds the trio looking like the Three Freshman, Clark in particular standing out with his Hollywood Western/matinee idol good looks. Chris Hillman, a bluegrass surfer from San Diego, and NYC conga man Michael Clarke auditioned, and the Jet Set were off, recording their musical birth as a series of demos at nearby World Pacific Studios. Along with boutique packaging -- picture discs, postcards, box -- The Preflyte Sessions hangars 40 songs in a 2-CD set, 16 tracks previously unreleased. As a single LP from the early Seventies, Preflyte has long existed as a backward extension of the Byrds' first album, 1965's Mr. Tambourine Man -- pop-inflected folk-rock -- only now it's been given the full reissue treatment. Bob Irwin, who owns the reissue-oriented Sundazed, does the lion's share of Sony Legacy's vault work, including the Byrds' catalog overhaul of the past several years, and as such, The Preflyte Sessions is a welcome piece of the set. From the Rickenbacker chime of opener "The Reason Why" and hopped-up "You Showed Me," a long-vaulted McGuinn-Clark nugget that ought to be a garage band staple, to Crosby's first vocal stabs and a slew of revealing Clark originals, this Preflyte is a practice run to greater heights. "Eight Miles High" arrived just two years later, but this, as Chris Hillman notes in the booklet, "Musically, it's so pure and innocent. Nobody was sacrificing their integrity." (Roger McGuinn plays the Cactus Cafe Wednesday, Feb. 20.)