Breaking Down the Barricades 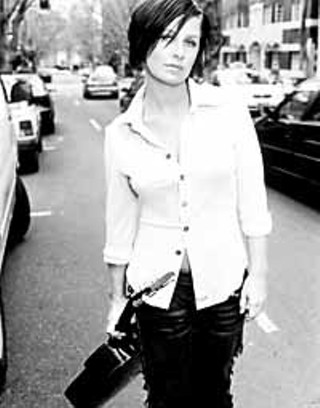 A little more than a year ago, few people in America had ever heard of singer-songwriter Kasey Chambers, despite the fact she's something of a phenomenon in her homeland of Australia. Chambers had already won two A.R.I.A. awards (Australian Grammys) for Best Country Album in 1999 and Best Female Artist in 2000, while her debut, The Captain, had been on the record charts for months and had sold the Australian equivalent of double platinum.

Upon the fall 2000 release of The Captain here in the U.S., the album piled up rave reviews in places like The Washington Post, Rolling Stone, The Village Voice, and The Austin Chronicle. Better yet, the then-24-year-old quickly drew high praise from folks like Lucinda Williams, who dubbed her "my favorite new artist"; Steve Earle, who proclaimed Chambers "the best female singer I've heard in a long time"; and Dwight Yoakam, who gushed, "Unbelievable. A writer and a voice, what a double gift."

Early in 2001, Chambers became the first non-American act to headline Austin City Limits in the show's 26-year history. That year, she was also the darling of South by Southwest, playing two extremely well-attended showcases, which resulted in a tour with Lucinda Williams, as well as prominent use of The Captain's title track on HBO's The Sopranos. Although ultimately not as successful here as she was at home, for a newcomer it was an impressive run. Now comes Round Two.

Chambers touches down in Austin this weekend, thanks to her just released sophomore effort, Barricades & Brickwalls. She's in-store at Waterloo Records Friday, with an appearance scheduled later at Gruene Hall, and Saturday, she headlines La Zona Rosa. Although it seems like a relatively quick follow-up to her first album, in reality it's been close to three years between recordings; The Captain was released in Australia two years before it made it to these shores. Obviously, that's a lot of time for a young artist to grow and change.

One thing that stands out immediately on Barricades & Brickwalls is that the twang quotient has gone way up. The Captain had its country-styled moments, but the new album goes a couple of two-steps past it. Speaking to the dark-haired, 25-year-old from her home in Avoca Beach, an hour and a half north of Sydney on Australia's east coast, Chambers agrees.

"This record goes to more extremes," she says. "Even though The Captain was quite successful, I didn't want to make another one just like it. I wanted to make an album that best described me at the time when I wrote the songs and when I recorded them. The last thing on my mind was that I had to play these songs to people. It was all about me sitting in my bedroom and writing a song."

Where The Captain sounds like the work of a squeaky-voiced young girl at times, the title track of Barricades & Brickwalls contains the decidedly womanly lyric "I'll be damned if you're not my man before the sun goes down." Chambers laughs.

"I never could have written songs like 'A Million Tears' or 'This Mountain' three years ago. Getting out and playing them live is really when they come to life for me. There's a point that you can't go past until you share them with people and start getting reactions to certain things. We've been touring since July here in Australia. I've enjoyed getting reactions to new songs and I'm going to enjoy it again when I come to America because it's a different thing altogether."

Even with guest appearances by like-minded artists such as Lucinda Williams, Buddy Miller, Paul Kelly, and Matthew Ryan, plus a refreshing cover of Gram Parsons' "Still Feeling Blue," Barricades & Brickwalls' most impressive song may be the hidden track "Ignorance." Recorded after the album was completed, Chambers fought to have it included, so it comes tacked on at the end. Against a barely strummed guitar, she ruminates on what it means to be a child in modern times. "If you're not pissed off at the world," sings Chambers, "then you're just not paying attention."

Chambers may not be in any danger of being pegged the new Woody Guthrie, but her songcraft is obviously maturing along with her. She's also taken responsibility for her position of influence, donating royalties from "Ignorance" to an orphanage in Vietnam.

Chambers' own childhood was extraordinary in many respects. From infancy until she was 9, her family spent seven months out of every year traveling the desert area of South Central Australia called Nullarbor Plain, an experience encapsulated in part by Barricades & Brickwalls' "The Nullarbor Song." Her father Bill supported the family by hunting fox and rabbit for fur, while the only form of entertainment available to the family was singing songs around the campfire. Bill's taste ran almost exclusively toward American country artists like the Carter Family, Johnny Cash, Gram Parsons, and Emmylou Harris.

The Chamberses moved back to the "civilized" world in 1986 so the children could go to school, and not long afterward, the family began performing as the Dead Ringer Band. They released three albums, won an A.R.I.A. in 1997, and became one of the most popular country acts in Australia. Even though they no longer perform under that name, Kasey's solo career remains a family affair with her brother Nash producing her albums, Bill playing lead guitar in her band, and her mother Dianne joining them on the road to sell merchandise.

In fact, the Chambers' acclaim reached such a level that their story was recently published in book form as Red Dessert Sky: The Amazing Adventures of The Chambers Family, penned by none other than John Lomax III.

"John's a great friend of ours," acknowledges Kasey. "We endorse the whole thing, but it's hard for me to comment on it. It's my life and it seems pretty normal to me, so I have a hard time thinking someone would find it entertaining."

That some who might find Red Dessert an entertaining read live here in Central Texas is yet another unique aspect of Chambers' still young career. Austin can lay claim to having the most Kasey Chambers fans in the U.S., the songstress having sold more copies of The Captain here than anywhere else in America. The folks at Austin City Limits still speak of her taping with delight. She reciprocates the love.

"I've never been to a place that I've felt quite so inspired by musically," she claims. "Sometimes I feel like a gatecrasher, though, because I'm from the other side of the world. The funny thing is that everyone told me how wonderful it was before I went there. I asked people here where to go when I was in the U.S. and everyone said, 'Austin's the place to go.' I was like, 'How special can it be?' and you really don't know until you go there. I don't know what the reason is. You can't even say it's the great artists that are there. There's something well beyond that.

"It's something that you might not ever put your finger on. I think it's a good thing you can't figure out exactly what it is about the place that makes it special. One thing that stood out was KGSR, the radio station. I had never heard a station quite like that. The fact that they played my music was just a bonus on top of it. It was pretty amazing, all those artists on the same station. Oh, and Austin City Limits was one of the most wonderful things I have ever experienced in my life."

Even with all the excitement surrounding her new release, Chambers has another surprise lined up. She and her partner, Cori Hopper, are expecting a child in May, so this weekend may mark the last time her local fanbase can encourage their adopted Aussie.

"I've been promised that my schedule won't be overwhelming, and to be honest, I'm really looking forward to the whole [motherhood] trip," enthuses Chambers, whose combination of self-confidence and naiveté is both infectious and at the core of her appeal. "I went through this period of time where people were asking me, 'How are you going to handle the second album?' And I thought about that for a while, but you know, I was doing fine until everybody started stressing me out about it."