SXSW needs venues, and the TABC keeps shutting 'em down. Public Enemy would be proud. 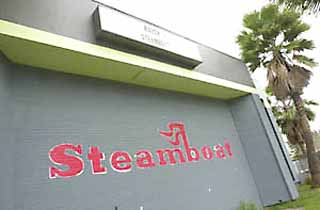 Up from Davy Jones' locker: the new Steamboat at the site of the old Bad Dog Comedy Theater, Riverside and Congress (Photo By John Anderson)

At least Nero provided the musical entertainment himself when Rome burned. Here in Austin, he'd be hard-pressed to find a place to play! Though hesitant to comment in depth on the matter, South by Southwest Artistic Director Brent Grulke admits that SXSW 2002 "would probably be a little farther ahead" if it weren't for a combination of the business slowdown caused by the events of Sept. 11 and the closing of so many local venues SXSW is used to working with. He still hopes to have "in the range of 46-50 stages" during the music festival this year (2001 had an even 50 venues), with the list of confirmed clubs so far being a mishmash of old and new (Antone's, Austin Music Hall, Austin Scottish Rite Theatre, Back Room, BD Riley's, Beerland, Broken Spoke, Buffalo Billiards, Chile Pepper, Clay Pit, Continental Club, Element, Elephant Room, Elysium, Emo's Jr., Emo's Main Room, Empanada Parlour, Hard Rock Cafe, Hickory St. Bar & Grill, Hole in the Wall, Iron Cactus, La Zona Rosa, Le Privilege, Maggie Mae's, Melagio, Mercury, Metro, Momo's, Mother Egan's, Opal Divine's Freehouse, Pecan St. Ale House, Plush, Rehab Lounge, Ritz Lounge, Room 710, Ruta Maya, Saengerrunde Hall, Scholz Beer Garten, Steamboat, Stubb's, District Bar & Grill, Drink on 6th, the Gingerman, the Hideout, the Red Room, and the Vibe). The added slowdown of initiating new venues to SXSW has resulted in booking delays of the music fest's free outdoor shows, which in previous years has featured icons like Iggy Pop, Patti Smith, and Guided By Voices, as well as getting invitations and acceptances out to bands; Grulke promises that a "substantial number" of Austin acts will be getting their thumbs-up for a SXSW showcase very soon.

The latest blitz of closings stems from clubs running afoul of the TABC, as said Alcoholic Beverage Commission conducted one of their regular stings the weekend before last and began the process of revoking liquor licenses of Sixth Street area clubs the Roxy, Treasure Island, Bayou Lounge, the Rehab Lounge, Platinum, and the Capitol Draft House. Granted, few of the above are noted for their live music (though SXSW is hoping the Rehab, for one, will stay open), but a simultaneous, unconnected investigation resulted in the Metro losing its license, too. TABC Lt. David Ferrero says that during last year's investigation of club owner Paresh Patel's disappearance (his whereabouts are still unknown), it came to light that the Metro's liquor license was in violation of the Alcoholic Beverage Code. As a result, both the Metro and Azucar, another Patel venture, have had their licenses "canceled for cause" effective this Friday, Feb. 1, at midnight. Josh Cisneros, who runs the Metro day-to-day, seems rather undaunted by this turn of events. His strategy for keeping the club open entails complete and unquestioning cooperation with the TABC, immediate plans to get the building up to full code requirements, and dropping the names of ESSCA (East Sixth Street Community Association) and head man Bob Woody as often as possible. "I just want to keep the music playing," he says with resolve. "If that requires changing the name, changing the corporation, changing the permit, whatever -- I'm gonna do it." Will putting the license in his name really solve the club's problems? Ferraro tells the Chronicle he's already met with Cisneros, and that the two "discussed some options" that might work to everyone's advantage. "I can pretty much say for sure that somebody's going to open a club in there again," Ferrero concludes, "but whether it's with Josh's permit or not I don't know yet."

While all that was happening on Sixth Street, a funny thing happened over at the Coliseum. A press release from the folks who put on Austin's annual two-day Carnaval (this Friday and Saturday) stirred up some dust with their announcement that, "[This year's] Carnaval Brasileiro makes its final stand in those hallowed halls as the Capital City prepares to demolish what many consider to be one of the best venues in the area." The City Coliseum/Palmer Auditorium crew confirm the news, but are quick to assure that others who have the building booked for later dates will not be pulling up to a deserted ruin just yet. In fact, says Palmer's Raylene Fealy, no one's sure exactly when the Coliseum will be knocked down. She says that at one point demolition of the Coliseum was planned for May, when the Palmer Event Center opens for business. The wrecking ball has since been delayed; perhaps someone realized that flying shards of concrete and glass don't make the best backdrop for a grand opening. Fealy says the current schedule calls for the Coliseum's replacement, the Long Performance Arts Hall, to have taken its place by 2004. In the meantime, she assures that the regular events one is used to finding at the Coliseum will be comfy in the Event Center from mid-2002 on -- including both of this year's Austin Record Conventions.

Finally, though the new proprietors of the Red Eyed Fly expected to have the club reopened by last Friday, Heath Macintosh at the venue -- now mainly a bar -- says there was a problem in getting the keys from owner John Meyer in time(!), but they're hoping to have their Fly open this Friday, and semi-regular live music back by the beginning of March. Danny Crooks, meanwhile, is getting a PA put in the new Steamboat next week and also hopes to get the tuneage flowing when March marches in. Even with those bits of good news, SXSW's Grulke is still facing the fact that even though this year's festival has received more applications than ever, last year's record high of approximately 1,000 showcases may have to drop to as "few" as 825 in 2002. "With so many acts applying, it's a luxury to be able to pick from the cream of the cream," he sighs. "On the other hand, it's heartbreaking to have to turn down talented and deserving acts because of a shortage of stages."

Look for Curt Kirkwood's new combo Eyes Adrift, wherein the head Meat Puppet joins forces with bassist Krist Novoselic of Nirvana and drummer Bud Gaugh of Sublime/Long Beach Dub Allstars, to conclude their short tour that began last week in Seattle and ends here in Austin at Emo's next Thursday, Feb. 7. If it's the Puppets you're interested in, there'll be a live CD coming from the Digital Club Network in April, recorded at Maxwell's in New Jersey last year with the Austin lineup of the band, plus a DVD highlighting the original band's commercial peak with video material from 1993-95 and more recent celebrity-style interviews... Mineral may be long gone, but lead singer Chris Simpson's more recent project the Gloria Record is still active. The fourpiece has returned with a new record on Arena Rock Recording Co., home of Superdrag, Elf Power, and Mink Lungs. The album's called Start Here, and the release date is set for April 9. They're currently on tour with Her Space Holiday, stopping back through town next Thursday for a Mercury gig with Explosions in the Sky (see Music Listings, p.74)... Freddy Fender is in stable condition at San Antonio's University Hospital, recovering after undergoing kidney transplant surgery and expected to fully recover... If you want to be an integral part of the Music Awards proceedings, don't forget to vote in the music poll. I know, I know, there's no ballot in this issue, but you can still vote via the web until midnight tonight, Thursday, by using the e-ballot at austinchronicle.com... Oh, no! Not another song called "Beer Run"?!? Yep, although the version on the new disc by locals the Trash Rock Kings isn't spelled all in capitals -- it doesn't even include the title anywhere in its lyrics -- it's specifically an ode to getting wasted at the Vibe and seems more concerned with hard liquor than the sudsy stuff. (Warning: TRK's Beck-beat version of the Doobie Brothers hit "Black Water" is way more amusing than it has a right to be.) Their CD release party is at Room 710 this Friday on a bill with Broken Teeth, the Oklahomos, and Drifter.