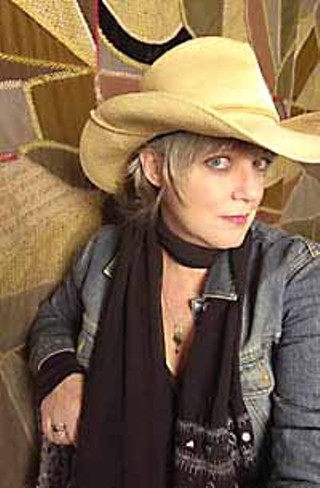 In the waning daylight of a winter Sunday afternoon, Kimmie Rhodes is in the recording studio behind her Lake Travis-area home, playing some new music for local actor/director Joe Sears. The songs are part of the score to their new theatrical collaboration, Doing God's Chores, a series of vignettes about uncommon goodness. The workshop production of this new musical is planned for spring 2003.

As the music plays, Sears closes his eyes and moves in his chair, visualizing staging, choreography, lighting, costumes. They laugh and joke, brainstorming and making suggestions, working on their fourth collaborative effort. Sears directed and starred in the workshop production of Rhodes' first theatrical project, Small Town Girl. She, in turn, served as editor, musical director, and assistant director on the production of his Trail of Tears pageant for the Cherokee Indian Nation in Talequah, Oklahoma during the summer of 2001. Together, they wrote and directed the musical review Hillbilly Heaven that was performed at Willie Nelson's western movie set town of Luck, Texas, and in Cody, Wyoming.

"Once we got to know each other, we realized how much we're alike," explains Sears. "We're both people who concentrate on good things and we love our work."

Judging from their afternoon together, they're also crazy about their families and community theatre, and insist on plenty of laughter in the workplace. The working relationship is so positive, in fact, Sears recently bought a home in Rhodes' neighborhood. That now makes him a member of the extended Rhodes/Gracey gypsy family circus, which includes the singer's husband, musician/record producer Joe Gracey, their 16-year-old daughter Jole, Rhodes' son Gabe, an accomplished musician/producer himself, and her older son Jeremie Rhodes and his young family. All these people play an integral part in Rhodes many varied artistic endeavors.

Which is to say that if you only know Rhodes as a sweet-voiced West Texas singer-songwriter and one time frontwoman for the Jackalope Brothers, then you only know a fraction of her story. Rhodes mostly writes/records music for herself, and occasionally contributing songs to movies and television projects, while supplying material for top-tier country acts such as Willie Nelson, Trisha Yearwood, Wynonna Judd, and Waylon Jennings. She's written three musicals and even a new novella/cookbook, The Amazing Afterlife of Zimmerman Fees. She's also known to throw great dinner parties.

As a 47-year-old West Texas native who grew up in the Panhandle town of Lubbock and began singing with her family's gospel trio as a child of 6, Rhodes has been making music more or less her whole life. Marrying young (16) and starting a family, she initially spent several years working on a North Texas farm with her first husband. Realizing she wasn't destined to be "a squash picker," Rhodes arrived in Austin in 1979 with two young sons and a guitar. She soon met Gracey, a well-known KOKE-FM disc jockey and prime mover in the Austin progressive country music scene.

Forming Kimmie Rhodes & the Jackalope Brothers with Bobby Earl Smith, the band attracted the attention of Willie Nelson, who invited the group to record in his studio in 1981. Here, Rhodes' distinctive West Texas voice and songwriting sensibilities emerged from the same Panhandle landscape that gave the world Buddy Holly and the generation that followed him: Joe Ely, Butch Hancock, Jimmie Dale Gilmore, Terry Allen, and Jo Carol Pierce. Think of Kimmie Rhodes as the kid sister to those folks and you'll have a pretty good idea of where she fits into the pantheon of Lubbock's (and Texas') finest songwriters.

Considering Rhodes' career trajectory solely by listening to the albums that bear her name might suggest someone prone to creative tangents. Looking at the bigger picture, however, the image that emerges is one of a quilt -- a big, colorful, homemade crazy quilt of a career, with all the same aspects homemade quilts suggest: skill and preparation, attention to detail, piecemeal work, collaboration, personal expression, comfort and sustenance before commercial viability.

Spending time with Rhodes gives one the opportunity to observe how this de facto seamstress works on different panels of her career quilt at different times, depending on her inspiration and what's happening in her life. Drawing on the talent and expertise of collaborators such as Sears and Willie Nelson, as well as singer Emmylou Harris, musicians Benmont Tench and Gary Nicholson, and singer-songwriters Gillian Welch and Beth Nielsen Chapman, Rhodes brings her musical and artistic vision to life.

"When you strip everything away, I always consider myself a writer first," says Rhodes. "In my heart, I'm a writer more than anything."

It's this writing that's brought Rhodes quite a long way in the past 20 years. Her first three albums, Kimmie Rhodes & the Jackalope Brothers (1983), Man in the Moon ('85), and Angels Get the Blues ('89), were released in Europe where the appreciation for American roots music borders on the fanatical. The LPs still have a loyal following in England, France, Switzerland, and the Netherlands, even though they're long out of print. Jackalopes, Moons and Angels samples the trio; give a listen to the snappy, danceable "Sweetheart You're a Lot Like Texas," the unabashed sweetness of "Daddy's Song," or the wistful "I Just Drove By," and you'll have a clear picture of the earliest panels in Rhodes' quilt.

The songcraft on her critically acclaimed West Texas Heaven from 1996 is considerably more mature, the product of a settled life. The songs evoke a genuine sense of place, with spare instrumentation reminiscent of the stark Panhandle landscape and Rhodes' sweet, plaintive voice quietly telling tales. It's as good a recording as any Texas songwriter of her generation has produced, trusting in the simple honesty of the lyrics and the crystal clarity of the images to get the job done. To assume that Rhodes' post-West Texas Heaven work mines the same vein disregards the inevitable impact that life has on a songwriter's creative output.

"When people ask me if I keep a journal, I tell them, 'No, I'm a songwriter. My songs are my souvenirs,'" says Rhodes, recounting the experiences that lead to her writing her first play, as well as the songs for her 2000 release, Rich From the Journey. "I didn't realize I was writing a musical when I started the songs for Small Town Girl, but I kept coming up with all this connective tissue that explained things between songs and pretty soon, it was obviously a play."

At some point during the writing process of Small Town Girl, Rhodes mentioned to friends that there was a part in it for Joe Sears, even though they'd never met. As luck would have it, good old Austintatious serendipity brought the two together soon after and they formed a mutual admiration society. Sears directed and starred in the workshop production of Small Town Girl in 1998, the songs from which Rhodes describes as "a lot like West Texas Heaven." While 1996-1999 were years rich in creative output for Rhodes, they were also a time of great sadness and loss that brought forth the songs on Rich From the Journey.

"Over the course of two years, I lost several people who were dear friends, very close to my heart," she recalls. "The songs on that record came out of me working through new levels of grief and loss, coming to a place of gratitude where I could celebrate life."

Indeed, the album has a decidedly spiritual sensibility and is dedicated to "all the sweet souls who sailed away during the writing and recording of these songs." Rhodes says the deeply personal songs are about the realization of a state of grace rather than anything having to do with organized religion, and careful listening to the gentle songs reveals that. It's also not a country album, grounded in spare West Texas landscapes and earthly desires, but it's very definitely a Kimmie Rhodes album, heartfelt and contemplative.

Though Rich From the Journey came out in 2000, listening to it today makes it seem truly prescient in light of September 11, 2001. In fact, Rhodes recounts a story about sitting with another songwriter friend in mid-September and hearing him say that the tragic events of that day made him feel as though everything he'd recently written was frivolous and unimportant. While that's likely a sentiment shared by many, Rhodes is pleased that Rich From the Journey was already out in the world, available to folks who were seeking the same state of grace from which she wrote them.

"I get e-mails every day from people who tell me how personally something on that album has spoken to them," she says with quiet pride.

The most recent recording released from the Gracey/ Rhodes/Sears collaborative team is the soundtrack from the musical production Trail of Tears. Two years ago, the Cherokee Nation invited Sears to reinvent and re-stage the annual outdoor pageant that depicts their people's tragic forced relocation in the early 19th century. The new production debuted last summer, and thanks to its success, will be repeated this year in the outdoor amphitheatre at the Cherokee Heritage Center in Talequah, Oklahoma, Thursdays, Fridays, and Saturdays starting June 22 and continuing through Labor Day weekend. (For reservations and more information, call 918/456-6007.)

For its part, the soundtrack features dramatic atmospheric music by Gabe Rhodes behind character readings by Joe Sears. There are also some traditional Cherokee folk songs and Kimmie singing "Amazing Grace." It's another work that taken by itself might seem like a true departure for Rhodes, but seen in the context of her more recent theatrical collaborations with friends and family, makes perfect sense.

As the sunlight fades on this Sunday afternoon, Sears leaves to get his granddaughter, leaving me alone with Rhodes and Joe Gracey in their home studio. She offers to play me some cuts from her upcoming album, Love Me Like a Song. The title cut, a duet with Willie Nelson, is my pick to click from this collection. It has radio play and big name artist cover written all over it, though Rhodes says her hit songwriter friends Rodney Crowell and Beth Nielsen Chapman settled on another track, "Only Love Can Save Me Now," as the potential moneymaker.

That one's got a great hook and enough visual imagery that video treatment might make a good investment. There's another sweet duet, too, this one with Tom Petty & the Heartbreakers pianist Benmont Tench, about wanting to "Walk You Home," plus a touching coming-of-age number with guest Emmylou Harris. The klezmer-tinged "Louie's World" even features the debut of the youngest member of the Rhodes clan, the songwriter's grandson Louie Rhodes, whose infectious baby laughter is woven into what sounds like circus music.

Judging from these songs, this newest panel of Kimmie Rhodes' crazy quilt should delight fans when it comes out later this year. By the time it does, Rhodes will have no doubt moved on to other sections of the quilt.

For an advance taste of Kimmie Rhodes' newest songs, she'll lead a songwriters' guitar pull next Friday, Feb. 8, at the Cactus Cafe, joined by her frequent songwriting partner Gary Nicholson and Stephen Bruton. Both her CDs and the book are available locally, and can also be purchased on her Web site at www.kimmierhodes.com.