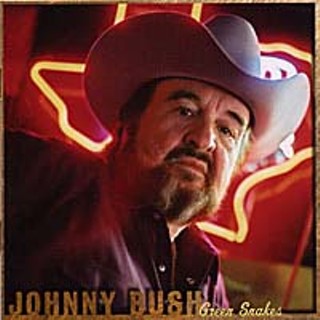 Green Snakes (Texas Music Group) Even though he's been making music for more than 25 years, Johnny Bush just keeps getting better and better. His latest, Green Snakes, is another feather in his cap, featuring the Texas country legend at the top of his game as a singer and performer. Although a respected songwriter in his own right, here he collects tunes from country legends Hank Locklin, Cindy Walker, Harlan Howard, Freddy Powers, and Moon Mullican. Bush imbues these selections with so much spirit you can almost hear the boots scooting across the dance floor. The title track, "Green Snakes (On the Ceiling)" is a strange tune about a man with the D.T's that's regained popularity among Bush's younger fans even though he originally recorded it before many of them were born (1972). With that in mind, his goal to bring back older tunes he's performed over the years but never recorded is a worthy one. With a stellar backing band, including Bobby Flores, Justin Trevino, Buddy Emmons, "Pig" Robbins, Floyd Domino, and Tommy Detamore, Bush lays down a couple of sly shuffles, a heartrending ballad or two, a lighthearted romp through "Nobody's Business (But My Own)," and a slice of Tex-Mex. The results are honky-tonk heaven. Early editions of Green Snakes contain an extra disc, a 9-song demo of early Bush originals recorded in 1965 with his friend, Willie Nelson and steel guitar legend Tommy Morrell, that's well worth seeking out.