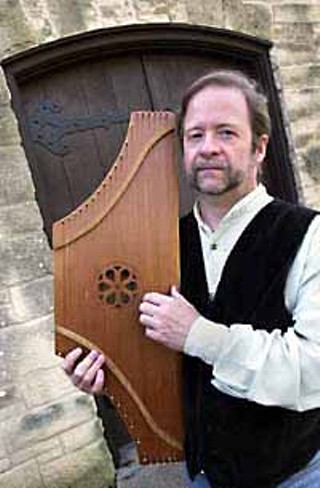 Early music. We're not talking 1975, or 1964. We're not talking 19-anything. "Early music" refers to European works that date back to the 1100s, moving forward through centuries of wars, plagues, royal and plebian marriages, religious ritual and pageantry, and all manner of popular culture. We're talking about music that underscored daily life in cities and villages all over Europe and parts of the Middle East and North Africa during the Medieval, Renaissance, and Baroque eras, well into the early 1800s, where the modern "classical" era takes hold.

We're not just talking about flighty, tights-clad lovers plucking lutes in the gardens of contrary damsels, either, or of droning monks parading down dark stone alleys. Early music encompasses a phenomenal wealth of styles and subject matter, with cultural revolutions that rival our relatively recent popular music revolutions. The vitality and variety of early music have given birth to a dazzling and nuanced international scene that for years has rivaled the standard classical repertory in terms of CD sales, and in live performance is as immediate and emotionally satisfying as any rock concert.

Austin, in particular, has a wealth of early music groups and musicians who find pleasure in, and audiences for, some of the best early music in the country. In the spotlight for the next six weeks with its Mid-Winter Festival of Music is the Texas Early Music Project (T.E.M.P.), under the artistic direction of Daniel Johnson, who has been a quiet force in the local early music scene since he took over UT's Early Music Project in 1986 and founded T.E.M.P. in 1987.

Johnson's résumé is a veritable Who's Who of early music performers and educators. His teachers include Emma Kirkby, William Christie, Anthony Rooley, Jordi Savall, and Andrew Parrott, among others -- names that pepper Johnson's Desert Island Disc selections (see below) as the best of the best. He's performed and/or studied around the world: in the Medieval city-fortress of Carcassonne in southern France, in London and Lewes, England, in Hong Kong, and all points across the United States. In addition to directing and performing for T.E.M.P., he has also performed and recorded with groups local and international, including Musa Iberia in London, the New York Ensemble for Early Music, San Francisco's Heliotrope, the Texas Baroque Ensemble in Garland, and Austin's the Clearlight Waites.

Johnson, like so many talented Texas musicians, comes with small-town West Texas credentials. He grew up in Big Spring, where music was a constant. "It was always athletics and music," he chuckles. Johnson chose Texas Tech for college, living for a spell in the famed, haunted, and musically charged 14th Street House whose former tenants included other musical West Texans, Joe Ely and Butch Hancock. While in Lubbock as a voice major, Johnson took classes in musicology and the history of music, which led him to early music.

"The music was so immediate," he enthuses. "I latched onto it."

He followed his passion for the music, eventually switching majors to study music history and literature, which he continued with a graduate degree in the same subjects. As an undergraduate, he discovered the joy of performing early music, joining the first Texas Tech Collegium.

"'Collegium,'" explains Johnson, "was a catch-all phrase used in the Fifties, Sixties, and Seventies for early music ensemble. It was based on a Baroque German term, Collegia Musikum: 'A bunch of friends getting together to play music.' All over the United States, schools had 'Collegiums' pop up in the Sixties and Seventies. And everyone kept saying, 'What the heck is a Collegium?'

"But the name stuck. When I moved to Austin, the ensemble's name was the Collegium Musikum, also. But the director at that time really got tired of people not knowing what that meant, so he unilaterally changed the name to Early Music Ensemble. Which was much more direct and much more understandable."

For the soft-spoken Johnson, the immediacy and directness of early music fuels his passion for performing, directing, and teaching. Ask him why he favors a particular performer or ensemble and he uses phrases like "more direct" and "less hoity-toity." Johnson suggests the immediacy of early music touches a "human-ness" surging through centuries of song. Performing and teaching allow him to connect to that human-ness. Then there's Johnson's belief that early music cuts across that boundary of formality that keeps many music lovers away from standard classical fare.

"Early music is a little less off-putting as far as the ponderousness of it," asserts Johnson. "Not that there's not really ponderous Renaissance and Baroque music, because there is. But early music achieves a certain rhetoric and emotion. It appeals to an intimacy and appeals to a shared -- I don't want to say Everyman -- but it's something that people of different classes, different backgrounds, can come together for.

"I imagine that in the old days people thought those who were doing early music were really messing around, because they didn't have the skill level, they didn't have the flashiness of modern instrument performers. And part of it was the learning curve, because [early music] instruments were just being made available in the Sixties, Seventies, and Eighties. They didn't have 15 years of learning. Now there are instrumentalists who are equal in all ways to the best of the classical music world."

One such instrumentalist is early music violinist Laurie Stevens, who performs throughout the upcoming festival, and gushes about the T.E.M.P. director.

"I could never say enough good things about Danny," says Stevens. "He loves the music. That comes through in every performance. His understanding of the literature and where it stands in the complete spectrum is profound. But only Danny would mix Gregorian chant with 'Classical Gas' with fiddle tunes and do it in a way that the audience sees the connections.

"And Danny is an incredible musician himself," continues Stevens. "I had the honor of seeing him perform in Berkeley, California, at the Berkeley Early Music Festival. I cried from beginning to end. He was virtuosic and musical and all of the things we expect from the best performers. He was true to the music, and that's what touched me. Only the best can do that."

Johnson, in addition to having mastered any number of modern (piano) and ancient (psaltery) instruments, is also a wonderful tenor. He boasts (but won't) a pair of noteworthy awards for his work in early music: the Quattlebaum Award from the College of Charleston in 1997, for his performing abilities; and first ever Early Music America Binkley Award in 1998, a national prize for his leadership of the University of Texas' Early Music Ensemble. This is apt recognition for a man who's been turning students onto early music for some 15 years now.

"Danny has a nose for seeking out talent that others don't see," offers Stevens. "The number of singers and players he's recruited and exposed to early music is amazing. They don't always like it, but at least they have had a taste of something different, and more often than not they come back for more.

"I know this because Danny started me on the road that has brought me the closest to being the musician I want to be. I am not the traditional violinist that yearns for a symphony job. But there is more music out there than we can ever play, and he's helped me and many others find our niche."

Soprano Stephanie Prewitt is another local musician who's gained professional experience through T.E.M.P.

"T.E.M.P. is a unique ensemble, as far as I know, in that it's more a collective than an ensemble," explains Prewitt. "'Project' is really a good way to describe it, now that I think of it, since it's ever growing and expanding. Nobody ever really leaves the group for good; they go off into the world, hone their skills, then come back to raise the level of the group still further. New talent is always coming in and being fostered and developed."

Another gift, as much for local audiences as performers, is the Mid-Winter Festival of Music, now in its fourth year. Strategically placed during one of Austin's best seasons, weather-wise, Johnson uses the six-week event to showcase all that T.E.M.P. has to offer. To do it all in a single show would take at least 12 hours, so Johnson paces the event over a half-dozen weekends. He points out that Boston and Berkeley alternate years for their respective early music festivals in June, while T.E.M.P. looks to offer its festival when it has little to no regional/national competition.

Equally important, says Johnson, is his view of the Mid-Winter Festival, as a homecoming of sorts. Traditionally, the annual lineups include many Texas Early Music Project performers from years past. Singers and musicians who have sung and played with Johnson's groups return for the camaraderie of performing early music together. He calls it the rubber band theory.

"Judith Overcash for example, was a music student here and took part in some early T.E.M.P. things," points out Johnson. "Then she went away and is doing gigs all over the country. She was a finalist for Anonymous 4 auditions. So she's been back for the last three years as part of the festival. It's really great to see her."

The festival covers all manner of eras and styles (see schedule), from the opening opera that Johnson's patched together from a variety of Baroque operas to the eclectic festival finale, there are six weeks of phenomenal music. When Johnson tries to describe the finale, he gets to the very heart of why early music matters, why it's so compelling and immediate:

"It's really about trying to make the connections between all times -- what do these people who lived in 1230 have to do with us? Well let's see: They loved each other, they had to live, they had to find out their reason for being there, they worshipped God, they had enemies, they had to survive. When spring came they were so happy.