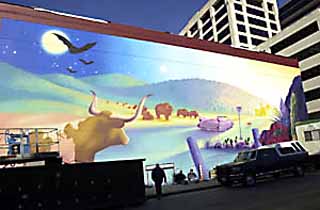 Rumors, rumors, rumors. All over town tales are being whispered about the next club to open, close, or transform in some way. Aside from oohs and aahs over the Hard Rock Cafe's in-progress new mural, this week it's Stubb's and Ruta Maya that are the subjects of the chatter. Charles Attal at the former confesses that "the rumors are true -- there have been talks" between himself and a potential buyer for Stubb's. Given that such discussion is under way, he declines detailed comment, but assures that "if it happens, [the new owners are] still going to keep it Stubb's," in a form apparently little changed from the way we know it today. Considering that talk on the street has suggested that the buyer in question might be interested mostly in the barbecue end of the business, it wouldn't be too surprising if the situation ends up reflecting the current goings-on at Ruta Maya. The story there, says co-owner Tim Sheehan, is that on Jan. 15, a new pair of co-owners take over the club end of things while he and partner Bob Leggett move the wholesale coffee end of the business to a cheaper location down in South Austin. New owners John and Chris Long say they're keeping the name and staff and working on making the place music friendly and comfortable all year 'round. That means that Ruta Maya will be closed briefly, Jan. 12-15, and will be accessible only through the Lavaca Street entrance until just before SXSW. Meanwhile, don't forget to spend $1 million at the Hole in the Wall this week, as all proceeds from shows Jan. 13-19 there go to the club's "Land Purchase Fund," designed to keep the long-beloved Austin landmark from being sold and turned into a Baby Gap. The week's highlight happens Friday, Jan. 18, with Electric Cock, Supercocks, Free Range Cocks, er, Bastards, and a very special Solid Gold 40 reunion. It's also going to be Club DeVille's five-year anniversary next week, so you might want to pop by for a few events, like this Sunday, with DJ Shane, Tuesday, Jan. 15, with free karaoke, and Thursday, Jan. 17, with DJ Faithgay spinning from 7-10pm, followed by a performance from Pong.

If you've been following the Old 97's controversy, anchored in the pages of the Dallas Observer (www.dallasobserver.com/issues/2001-12-27/sceneheard.html/1/index.html ), you already know that the old rumor mill is rife with claims that the band has broken up. For its part, the band's label Elektra Records tells the Chronicle that the band is not kaput, merely "on hiatus" while Rhett Miller records a solo album for the folks at AOL-Time Warner. Considering Miller's account of being at Ground Zero of the World Trade Center attacks in Rolling Stone late last year, the onetime Texan should have plenty to write about when it comes time to record. Meanwhile, the Observer claims that the other band members aren't allowed to take part in the solo disc, and may not even be legally allowed to perform at all. Given this, I keep hearing the Monty Python dead parrot routine in my head every time someone mentions the 97's these days: "They're not broken up, they're just resting."

Look for Stephen Bruton's next album to come out on New West Feb. 26 as the busy Austin/Los Angeles-based label kicks its Texas side into high gear for 2002. Outside the label, Bruton joins John Doe of X, Tom Verlaine of Television, Mark Kozelek of Red House Painters, and Jon Langford of the Mekons/Waco Brothers on a new Kris Kristofferson tribute album, but that doesn't mean his home label has nothing else to do. New West, they tell me from their small (only four people on staff) office over on Monroe Street, also has a new Stan Ridgway disc this week, Jon Dee Graham's Hooray for the Moon next week, Chuck Prophet in April, and a one-shot covers album from Mark Eitzel in the foreseeable future. Better still, they're currently all abuzz about their latest Delbert McClinton album getting a Grammy nomination (see box, bottom left). They also have a mystery signing expected any day, but they say that it's definitely not the rumored Paul Westerberg who'll be inking the deal. Maybe it's one of the semi-ousted members of the Old 97's ...

Those Riddlin' Kids have returned home after two and a half months on the road, the camp reporting, "We've covered most of the U.S. twice now, and the Midwest three times, creating a solid following with the kids out there." That's the way to do it, gang. Look for the Kids on the soundtrack to the Jack Black vehicle Orange County (making them yet another Austin act with dubious ties to Tenacious D) with "I Feel Fine"; a new mix of the song will be serviced to radio Feb. 13. Already confirmed way in advance for SXSW, the Kids headline the Columbia Records showcase, and will continue on tour from the end of January through the conference... Speaking of SXSW, more names continue to trickle in (see box, bottom right). For instance, I hear the Dictators will be playing a party during the festival, and one hopes they'll confirm a showcase as well. The best way to get to see some of the already-confirmed for free is to volunteer for SXSW; there's a volunteer meeting at the Hyatt Regency, 208 Barton Springs Rd., Wednesday, Jan. 16, 5-9:30pm. Look for a second Sunday, Jan. 20, 1-5:30pm. Drop in either day and expect to stay approximately one hour to view a short video and sign up for duties that interest you. For those planning to buy a badge for SXSW, there's a registration deadline this Friday to get your laminate for $425. After that, the price jumps to $475. As usual, go to www.sxsw.com for more details... Grammy shoo-in Bob Dylan along with sidekick Charlie Sexton will be coming to the Erwin Center Feb. 24. Tickets go on sale this Saturday through UT Ticketmaster outlets, including HEBs, or you can charge 'em at 210/224-9600 or visit the Web at www.ticketmaster.com... Here's an interesting little tidbit: You probably know that Glamourpuss' Pip Pop (aka Phillip Plyler) played bass in Sons of Hercules and the Hormones. However, did you know that while living in L.A., he played bass briefly with Sylvain Sylvain? Wonder if he'll be in the audience when S.S. plays tonight, Thursday, at Emo's?...