That was the year that was in the Live Music Capital … 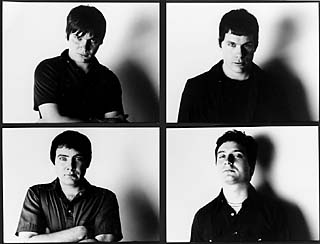 Here's hoping "Trail of Dead" refers to a 2002 success story and not industry gossip.

Oof! Austin music took a flurry of blows to the breadbasket in 2001, but the tough old champ managed to keep its belt and remain standing, even if beloved scene veteran Champ Hood did not. To start with, an unprecedented number of Texas and other regional musicians left us this year on their way to join the choir invisible. Hood was one, of course, passing away mere weeks ago from cancer, but many other losses were also deeply felt. Before the year had even dawned, there was a death in the family, in fact. Just as Townes Van Zandt and Hank Williams had reached their expiration dates over previous New Year's, 2001's first such loss was guitarist Eddy Shaver, son of Billy Joe Shaver, who later suffered his own health problems with a heart attack following a performance at Gruene Hall last summer. In the early morning hours of December 31, 2000, the younger Shaver died of an accidental heroin overdose at the age of 38. Other subsequent passings (in no particular order) during 2001 included 13th Floor Elevators bassist Danny Galindo, who expired from complications associated with hepatitis C; Michael E. Johnson, co-founder of the Killer Bees, after a long bout with heart disease; zydeco legend Boozoo Chavis died following an attack of congestive heart failure and a stroke, both suffered prior to his second scheduled appearance at the local Louisiana Swamp Romp on April 29. Richard Hays, member of the Hickoids, the Next, Ideals, Sharon Tate's Baby and numerous other bands, had heart arrhythmia and passed away in his sleep at only 45 years of age. Fredde "Pharaoh-- Walden, blues drummer for everyone from Jimmie Vaughan's Storm to Sue Foley, was another May loss, while friends, family, and music fans bade goodbye to Johnny Holmes, whose first booking gig was a Grey Ghost performance in Bastrop in 1933 and who, 12 years later, opened the Victory Grill as first a burger stand and then a music venue. He was 83 and suffered from Alzheimer's disease, and was found in his driveway in February, dead of hypothermia. And of course there was also world beat fugitive Dan Del Santo; no one knew he was alive until he was dead, a victim of internal bleeding at his Oaxaca, Mexico, hideout. Mambo John Treanor's passing was not unexpected but no less devastating for generations of musicians, from the jazzbos to the Vanguards to Toni Price. Chesley Millikin, the Rolling Stones cohort who managed and oversaw Stevie Ray Vaughan's career, died from emphysema; actor/singer Robbie Jacks also passed away in August at age 42. Former Chronicle writer/editor Jeff Whittington passed away from cancer. At least we were spared any September 11-related fatalities, though many touring musicians from our town found themselves stranded away from home, while others struggled with emotion and how to deal with the event as musicians and as Americans.

Until 9/11, when all news outside of New York or Washington suddenly became irrelevant, it was a banner year for national news coverage of Austin in general, jumpstarted naturally enough by George W. Bush inauguration week festivities, which included such delights as Dubya doing some kind of wiggle dance with Ricky Martin. That was eclipsed by the spectacle of Destiny's Child repeatedly demanding, "When I say George, you say Bush!" Also among the performers at the prestigious Texas-Wyoming Ball in our nation's capital was Mr. Fabulous, aka Dino Lee, famed King of White Trash and current Ocean's 11 owner combo. Then again, maybe it wasn't such a banner year, as Austin made national headlines with the riot on Sixth Street as the Austin Police Department clashed with Mardi Gras partygoers, resulting in close to three dozen arrests, assorted unpleasant injuries, and scandals revolving around APD's attempts to clear the streets with pepper spray and billy clubs. In the end, very little of Austin's much-ballyhooed music scene made it to the nation's cathode ray tubes and flat-screen TVs of tomorrow, overshadowed hopelessly by the drunken-monkey antics of Bush's comic-relief offspring Jenna and Li'l Bar, whose underage drinking arrests and other juvenile hijinks even netted them a co-starring role in the national press with tabloid hero Bat Boy. As sad as it may be, far from the cover of the Rolling Stone, the Austin of 2001 was best suited for the cover of the Weekly World News.

Noah Balch was not happy about how the rains turned out earlier this year. His stage name Noah Ark ceased to be amusing to him when news reports on his Electric Daisy Carnival rave centered on the pre-dawn mud-caked traffic snarl in one of the parking lots following the all-night event. By fall, when the next batch of heavy rains returned to force cancellations of Stubb's shows and heavy flood damage from Lovejoy's to Cheapo Discs and all points in between, Balch had more important things to worry about than the weather, as the nationwide crackdown on party drugs came to town. Ludicrous misuse of what is known as the "Crack House" law pretty much shut his rave events down for good, as had been happening to similar rave promoters elsewhere across the country. This year's attempt at another Woodshock Festival, the Austin-as-Eeyore's outdoor music festival that had been extinct for a decade, fared no better, getting the boot from Waterloo Park, home of the first Woodshock 20 years ago, and drawing next to no one inside the hallowed walls of Emo's. There was little to report in the way of local success stories, though notable were Riddlin' Kids signing to Columbia, Bruce Robison's No. 1 country hit by way of Tim McGraw, the rise of local dot-com Audiogalaxy in the wake of Napster's collapse, Trail of Dead's deal with Interscope, the Butthole Surfers finally getting an album out. There was, of course, the usual slew of bands splitting from their labels. Among them were Kacy Crowley and the Damnations offering up their declarations of independence within weeks of each other, with Johnny Goudie and his last-name-sake band opting to depart from their home at TMC/Elektra Records. And of course, just last week in these pages you saw the news of Fastball's Hollywood Records deal going the way of the studio system. And of course, 2001 was a year of many closings. The tiny-but-charming Ritz Lounge, the homey grrrl-age Gaby & Mo's, and the Red Eyed Fly. A format change there at the end of May was the beginning of the end for that bright star on Red River, and by November, there was just the end, period. The eclectic little Sixth Street endeavor the Empanada Parlour saw perhaps the most troubles of anyone, with the nearby Sheraton Hotel tossing a lawsuit at the club over sound levels, starting up a whole new chapter in the history of Austin and noise control laws. Okay, okay -- there was some good news as well. The most recent Arbitron ratings brought with them an incredible shock of an only-in-Austin nature, as the No. 1 radio station in the city turned out to be public radio KUT-FM, who needless to say are better at playing locally produced music than the No. 1 stations in most markets, which are dominated by Top 40 trash. The commercial stations in town, thanks largely to the homegrown nature of the LBJ "family" of stations, also continued to pay attention to local music in a way that would be unheard of in most markets. Also, the success of the Austin film community allowed for some successful piggybacking by the music scene. Glover Gill and Tosca, for instance, got the plum role of scoring Richard Linklater's animated slacker dream Waking Life, while Davíd Garza got some good mileage out of songwriting with Robert Rodriguez. We lost a raft of good musicians, but we gained some new ones as well, and John Croslin, the Zeitgeist/Reivers founder turned in-demand producer, returned to the roost after a few years out West. Speaking of the Reivers, their announced reissue CDs have yet to appear, but it was a banner year for Eighties Austin rock nostalgia nonetheless, with mucho material becoming available for the first time on CD (and in many cases the first time in any form) from such mainstays as the Wild Seeds, the Skunks, and more. Perhaps best of all, this was the year that Roky Erickson, the man who started it all with the 13th Floor Elevators, finally got put on the road to recovery from the demons and general poor health that have stalked him for so many years, with his brother Sumner getting Roky to a dentist and other doctors, setting him up in a stable home environment in Arizona, and establishing a trust fund for him. Meanwhile Daniel Johnston, the Roky for the Kurt Cobain generation, was doing even better -- performing on several continents, writing and recording with abandon, and actually embarking on a full-fledged tour, something that a few years ago anyone would have thought an impossibility. Beerland opened at last, giving Austin the new Cavity Club/Bates Motel-type venue its young, loud, and snotty rockers so desperately needed. Also, numerous new clubs are reportedly in the works for next year, from Danny Crooks' new Steamboat to Austin's own Hard Rock Cafe, set to be up and running on Sixth Street in time for SXSW 2002. And finally, it's simply good news that some things didn't happen. Despite persistent rumors to the contrary, the Hole in the Wall has not run dry of liquor and thrown in its bar towel -- the possibility of losing the treasured Drag club has been staved off until at least next June, I'm told. Emo's is not closing either, though someone's been spreading word to the contrary to the point that the club's getting worried calls from bands' bookers. Says owner Frank Hendrix, "We're healthy, we're strong, and we're gonna be here 10 years from now." Let's all pitch in and see if we can get things to the point where we can say that with assurance about everything we still love here in Austin. At the very least, we can support each other and do our damnedest to hang in there. Aloha, Mr. Hand.