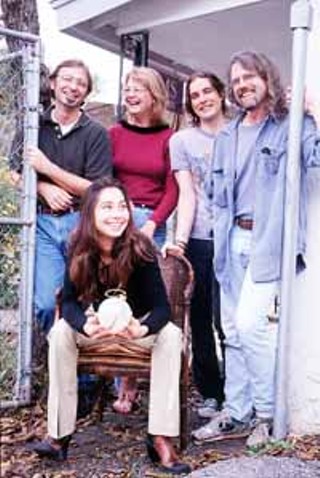 One Strike, You're Out

The salad days are over -- at present, anyway -- for Fastball, as the band has been dropped from the Hollywood Records roster following poor sales of their most recent album, last year's The Harsh Light of Day. Hollywood reps declined comment, but "The Way" author Tony Scalzo says that Rob Seidenberg, the A&R guy who signed them and since moved to Mammoth Records while still working for Hollywood, tried to keep them on. "He was forced to go with his marketing experts," explains Scalzo, "and they don't like us." Scalzo says he's relieved to be free of the label, noting that he "knew our days were numbered when the first single [from The Harsh Light of Day] left radio," and adds that he's disappointed by the lack of support the label had been giving the band. If they don't get a better bite, then Mammoth will presumably snap them up, though Scalzo says he can't see that being an option unless nothing else comes their way. As far as keeping busy, Scalzo says the band has finished their songwriting sessions at Basset Sound and will be recording their next album in Nashville (where Miles Zuniga lives currently), with Fountains of Wayne meister Adam Schlesinger and Kevin Lovejoy joining in the creating. And of course, he's also got plenty of Young Heart Attack gigs coming up to keep him busy.

"Yep, I blew that operation off at the last minute," sniffs Billy Joe Shaver, who was due for major heart surgery last week. He explains that he "didn't want to be cracked open during Christmas," noting that he wouldn't be able to drive for several weeks or perform for even longer, were he to go under the knife. He admits he "wasn't going on much" when he submitted to his last operation in which Shaver opted out of the scheduled bypass in favor of angioplasty on two of his four clogged arteries following a heart attack earlier this year. However, Shaver insists he feels great now, and will get around to the surgery sooner or later. After his New Year's show at Poodie's, perhaps? "Naw, then I've got at least five shows with Kinky [Friedman]." Those include Gruene Hall, where he had his heart attack ("I'm going back for more!") and an Antone's gig on January 12 ("I don't know if they're ready for a vaudeville show!"). Okay, then, how about February? "Nope, we go to Australia in February," he reports, "we" being himself and Friedman again. So, one assumes Shaver won't be getting the life-saving operation ... "'til I decide to do it," he concludes. "I'm a Christian, so it doesn't really matter, does it?"

For those wondering why the Nashville Pussy/Betty Blowtorch show at Emo's on Tuesday was canceled, it's because Blowtorch vocalist Bianca Halstead was killed in an auto accident in New Orleans over the weekend, thus canceling the tour. Halstead was reportedly riding in a Corvette with a Metal Sludge correspondent when he lost control of the vehicle and got broadsided by another car. The writer is facing criminal charges, not the least of which is violating the most basic rule of journalism: Don't kill the interviewee... Looks like the new Steamboat will be located at the old Bad Dog Comedy Theater at the corner of Riverside and Congress, and Danny Crooks says he's hoping the location's cursed reputation is due to a string of businesses with poor management. He also says he's not opposed to booking comedy acts (since that's what the place is set up for) along with rock & roll. "I wanna actually have a venue this time, not just a club," he says... The Texas Music Group is re-releasing parts of the Watermelon Records catalog, including albums by Don Walser, Tish Hinojosa, the Derailers, and Alejandro Escovedo. Look for them in the spring... Pat Jasper is retiring as director of Texas Folklife Resources, the organization she helped found in 1984. The search for a replacement begins next year... Speaking of resources, don't forget the SIMS Foundation is open during the holidays, if you feel like you can't make it through another Christmas. Call 494-1007 or check the Web site at www.simsfoundation.org... No matter how much NewsRadio/Fear Factor star Joe Rogan hates it (see his new DVD for details), the Austin Music Network continues to thrive. And now, says manager Woody Roberts, another positive has been added to its status with the return of longtime local video producer Hank Sinatra to the ranks. Sinatra's been shooting local bands like King Zero, Something Johnson, and the Loy Sisters at local clubs, with Babe's as his home base. Of course, there's lots of holiday cheer in the air at AMN these days as well; Roberts says the current No. 1 request is for Jimmy LaFave's rendition of "Run, Rudolph, Run," recorded live at Jovita's... Speaking of Jovita's, Thierry LeCoz has his special Christmas show coming up there this Sunday, from 6-8pm. LeCoz will be joined by David Holt, the Texas Tornados rhythm section, and special guests like Alex Napier... Pick your Doyle Bramhall: First, there's the new Jennifer Warnes album, which sports a couple of his compositions, then there's the Out Cold soundtrack with his "Green Light Girl"... Okay, if you're reading this on the Internet, or if you are near a computer, trust me. You need to go to www.buttholesurfers.com/steak.html immediately for a good laugh -- and a good cause!