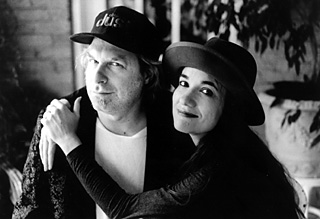 A lot of people -- indeed, probably most people -- are content to just listen to whatever's on the radio. They don't give a lot of thought to the artists they're hearing, the history behind the music, or the players on each song. Whether it's hit radio like "hot country" or familiar, comfortable formats like oldies or classic rock, their attention spans aren't much longer than three and a half minutes, then the next song comes on. They're not likely to seek out music that won't typically get played on the radio, and that's too bad.

You probably won't hear Buddy and Julie Miller on your afternoon commute. Their credentials, though, include folks like the Dixie Chicks, Brooks and Dunn, Jim Lauderdale, and Emmylou Harris. 1999 started off with Buddy Miller being named Guitarist of the Year at the Nashville Music Awards.

Their albums are intense and personal, full of hard-country grooves and free of Nashville country's cheesy musings about pickup trucks and American pride. Still, they found themselves on the CMA Awards this year, shoulder to shoulder with Lee Ann Womack as she performed their "Does My Ring Burn Your Finger."

"It was kind of a weird place for us to be," reflects Buddy. "The awards show was pretty interesting, though -- seeing [the Dixie Chicks doing a Bruce Robison song], then we go out there, then O Brother takes single of the year, a song that never got played on any radio station ... and the song of the year was 'Murder on Music Row'!"

It was a long road that eventually brought the Millers to the CMA Awards stage, and not always an easy one. The pair's roots are in Austin, however; the two met in the early Eighties ("back when the Dead Sea was only sick," quips Julie) after Julie's ambitions carried her away from her hometown of Waxahachie and into Austin. After their days in Austin, their travels took them to New York, East Texas, Seattle, San Francisco, Southern California, and eventually to Nashville some eight years ago.

"We'd never stay in one place long enough to really put down roots," recalls Buddy. "We only ended up in Nashville because we were going broke in California. At the end of every month I'd look around the room and pick out a guitar to sell to make the rent. I was playing with [Jim Lauderdale] ... and he'd been with about every major label there was and I'd come and stay here and realized that we could pay about half as much and live in Nashville. We were almost going to come back to Austin, but we thought [Nashville] was one place we hadn't tried yet, so we'd give it a shot."

The closing weeks of 2001 will keep the pair busy, with a New Year's Eve gig at NYC's Bottom Line and a tour of the Northeast and Midwest. After rolling back into Nashville long enough to do laundry, they will then set out on the Down From the Mountain tour with Patty Loveless, Allison Krauss, Emmylou Harris, the Fairfield Four, and the Nashville Bluegrass Band -- a pretty full plate, yet pretty far removed from the Garth Brooks/Faith Hill/Shania axis of modern-day Music City.

Buddy Miller's story goes back to the Sixties, when he got his feet wet by playing stand-up bass in bluegrass outfits. Switching to acoustic guitar, he made a dent with the Buddy Miller Band, a lineup that for a time included Shawn Colvin on guitar and vocals. After years of playing more-or-less behind the scenes, Miller's 1995 Hightone debut, Your Love and Other Lies, came out to critical accolades.

Its 1997 follow-up, Cruel Moon, featured songwriting contributions by Nashville tunesmith Paul Kennerley ("Love Match") and Steve Earle ("I'm Not Getting Better at Goodbye"), as well as covers of Gene Pitney and Staples Singers songs. His vocals and/or guitar work can be heard alongside people as varied as Lucinda Williams, Victoria Williams, Patty Loveless, and Trisha Yearwood.

Julie Miller's career, on the other hand, took a somewhat different path in the 1990s. Reflective of her beliefs, her albums He Walks Through Walls, Meet Julie Miller, and Orphans and Angels were released on the Christian label Myrrh. It wasn't until 1997's Blue Pony that she released secular music (on Hightone), followed by 1999's Broken Things. Her solo material shows a balance of innocence and worldliness, strength and vulnerability, with a voice that splits the difference between a guileless little girl and a somewhat world-weary woman, often in the same song.

In effect, though, anything by either of them will be a Buddy and Julie Miller effort, with the cross-pollination that goes on between his playing and production and her songwriting and vocals.

"If our stuff comes out sounding country, it's usually because of me," notes Buddy dryly. "I mean, Julie likes to listen to Social Distortion, and I like to listen to traditional music and old field recordings. Somehow we meet in the middle and it works out pretty well."

The collaboration between the two of them, when it comes to their music pursuits, is as natural as their longtime relationship.

"When I got out of high school I was in a couple of different bands and wound up [in Austin] with a singer-songwriter named Rick Stein and was the girl singer in his band," Julie reflects. "Buddy came down from the East Coast and auditioned for the band ... we became bandmate-type pals for a longtime before we ever had any kind of romance happen. After playing in Austin for a few years and never making any money, we wound up in New York when the Lone Star Cafe was happening. Buddy had friends there, and that's where we took off to."

Julie Miller's secular material is still imbued with her spirituality; her views on Christianity and her own personal beliefs are as honest and unpretentious as the rest of her songwriting.

"People from the South have had a real heavy dose of 'churchianity,' y'know, feeling good about themselves because they went to church on Sunday, but it doesn't have any real meaning in their lives," she says. "It's a lot of hypocrisy, and a lot of different things brought me to want to know the truth, and that wasn't it."

Julie recalls a time when at age 19 or so, a deep sadness and spiritual emptiness drove her to commit herself to the Austin State Hospital for a time until she realized that "even if I am crazy, I don't want to be here." After a period of soul-searching and groping, she had an epiphany of sorts in an upstate New York bar in 1980.

"It was like God put the make on me," she laughs. "I walked in and something happened and I was not the same. I mean, I thought, 'What, am I hallucinating? No, I believe in God!' That's kinda what happened ... and it changed my life forever. I can't see myself not being a Christian ... it would be like if I was tempted to eat garbage or something."

Still, Julie's beliefs and commitments are profoundly personal, and she realizes that it's a strictly private choice for everyone: "There are the Christians who want to prove to God that they don't care what people think [and they'll] offend people in the name of God ... 'See, God, I don't care if people think I'm crazy and stupid and hate my guts!'"

There's none of the pushiness of the keen-on-Jesus types in "Rachel," her bittersweet ode to a Christian victim of the Columbine massacre. Instead, her spirituality comes out in the context of someone who's content and comfortable in their own beliefs.

Together, their songs are marked by a delicate balance of power and subtlety, with heartfelt vocals and Buddy's muscular, economical guitar playing. It's definitely somewhere past the margins of mainstream country, but not without a hard-country twang running through it.

More or less by default, their stuff falls into the alternative country category; by Buddy's definition, that's "country music that nobody's gonna hear, that comes out on small indie labels rather than majors. I don't know -- I just want to put out our records and do what we do.

"Hell, we record at home in our living room."