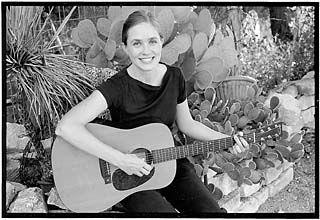 If the funky old Chicago House was still around, it's a good bet that Caroline Herring would be its current darling. These days Austin doesn't really have a music venue that cherishes and nurtures singer-songwriters in the way that late, lamented coffeehouse did. But that hasn't stopped young musicians like this Mississippi native from moving here.

Neither have the musicians who already live here ceased continuing to lend a hand to newcomers with obvious talent. Although it may seem that Herring has just burst onto the Austin scene, the truth is that she's been in town for more than two years. She's been playing Thursday-night happy hours at Stubb's BBQ for more than a year, with that gig becoming a meeting place for folks to enjoy a relaxed vibe and good folk music. Herring has had her share of helping hands along the way -- Peter Rowan, Ray Wylie Hubbard, and Tish Hinojosa, to name a few -- but we're getting ahead of ourselves.

Listening to her first record, Twilight, it's obvious that she's gifted. Her lyrics possess a smartness that's informed by the literary giants of her former hometown of Oxford, Mississippi, yet are deceiving given her relative inexperience as a songwriter. Another striking thing about her music is the variety of traditional styles she uses in her songs, from basic acoustic folk to bluegrass to old-timey country. Then there's her deep, resonant voice, a natural match for the brand of folk she uses to convey her stories and songs. Taking it all into account, Herring has a world of talent, and where she goes with it will be interesting to watch. How she got here is equally intriguing.

Born and raised in Canton, Mississippi, a small town of about 10,000 about 20 miles north of Jackson, Herring had the somewhat standard musical upbringing that featured piano, flute, and church choir. After graduating from the University of Mississippi and teaching for four years, she moved back to Oxford to attend graduate school for Southern folklore.

It was at that time that she began what she calls "this life of mine," referring to her musicianship. She became part of a bluegrass band, the Sincere Ramblers, singing along with playing guitar and mandolin. Things got a lot more interesting when the Ramblers started an old-fashioned radio show in an old furniture store -- lots of wood and good acoustics -- that had been converted into a used bookstore.

Once a week, they would move the bookcases aside and set out 150 chairs for The Thackery Mountain Radio Show. It was part musical and part literary event, with the Ramblers acting as the house band and authors reading their work. The Atlanta Journal-Constitution called the show "Prairie Home Companion without the annoying accents," and it continues today. It was during her time with the Ramblers that Herring met and got to play with, among others, Rowan, Gillian Welch, Tony Furtado, Blue Mountain, and the Bottle Rockets.

Peter Rowan remembers that after his first meeting with Herring, "I thought Caroline had a freshness in her voice. She had a fresh approach. She was coming up with a literary style in her songs and I encouraged her. It's nice to hear a fresh new voice with new songs. There's a lot of people out there with songs, I just think she has some of the good ones."

Even so, music was just something Herring did while attending school. Upon finishing her graduate work, she was still searching for direction.

"After grad school," she recalls, "I wrote to Peter and asked if could I drive his tour bus. He wrote back and said he didn't have a tour bus! I was so wet behind the ears. But I just kept on saying to myself, 'I want to play music.'"

Around this time, she began working on writing songs in earnest. But she also applied to some schools with the idea of pursuing a doctorate. 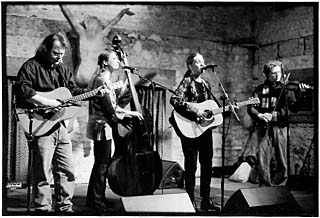 "In the fall of 1999, I was accepted into the University of Texas for American Studies," she explains. "I had applied to some other universities but I really wanted to come to Austin for the music. When I got here, I realized Peter lived in Texas part of the time. He was very nice and he introduced me to Billy and Bryn Bright."

The Brights play with Rowan on occasion as the Texas Trio. They also have their own band, the Two High String Band, with whom Herring now regularly appears. Within a few months of being here, Herring's talents were starting to be recognized. She sang with Hubbard at Kerrville and opened shows for Hinojosa in Austin and Dallas.

While making music has definitely been a big part of her life here in Texas, Herring also got what is for her a dream job at Texas Folklife Resources. She began there at a work-study position in conjunction with her UT studies, but when a permanent job opened up, she jumped at it. Now she is "working with these master traditional musicians, taking them to small towns to re-invigorate the traditional arts in those towns. To work with master artists all over Texas, that was exactly what I wanted to do.

"It's been an enormous education working with TFR though," she continues. "I didn't even know what conjunto music was when I moved here. The accordion just does not exist in the Mississippi world where I lived. Some people here are just accordion crazy. I've worked with fiddlers like Alvin Crow, Randy Elmore, and Valerie Ryals. Conjunto accordionists like Santiago Jimenez Jr., Mingo Saldivar, and Joel Guzman. A few mariachi groups. Blues musicians like Clarence Holliman and Carol Fran. It's been wonderful. Texas is so widely diverse. It's like several states, and it's rapidly changing too. I find it fascinating."

Twilight has been released on a new label, Blue Corn Music, which is run by Denby Auble out of Houston. About a year ago, Auble, himself a part-time musician, was looking into starting a label on his own. He was scouting for Texas singer-songwriters for his fledgling label when he caught Herring at Stubb's one Thursday. He called John Inmon, who had produced some sessions for Auble, and urged him to go check her out.

After seeing her, Inmon, best known for his work with Jerry Jeff Walker, the Lost Gonzo Band, and the Shakin' Apostles, agreed she had a lot of talent. When Auble and Herring agreed to work together, Inmon was brought in as producer. Herring got to use Rowan and the Brights on the record, and they were recorded backing her vocals first. After the basic tracks were done, Inmon brought in folks like Lloyd Maines, Paul Glasse, Richard Bowden, Eamon McLaughlin, and Paul Pearcy to sweeten things up a bit.

Herring claims she "wanted [Twilight] to be as live as possible." If that means that it sounds like a bunch of really good pickers sitting around a fireplace and having a good time, she's succeeded.

"It was a collaborative effort, and the buck stopped with me," Inmon relates. "There are lots of colors on the palette, and that was intentional. We didn't want it to be a basic string-band record. We wanted to hear her songs on the radio. But it was a great learning process for Caroline. I think she could probably do the job herself next time, and she might be inclined to do so. It really was a blast. It was so much fun to watch her blossom in the studio, and she did just that."

The record's initial success hasn't totally swayed the transplanted Mississippian on a career choice, however.

"I've done very little school since I got here, actually," she says. "I still have a hard time thinking, 'I'm a musician. I'm a writer. I'm a singer.' I guess you are whatever you call yourself, and I'm trying to get into that mind frame. But sometimes I do worry about how I'm gonna pay the rent.

"OK, I'm actually beside myself with excitement. It's like a big joke. How am I doing it? I'm like, 'Mom, are you seeing this?'"