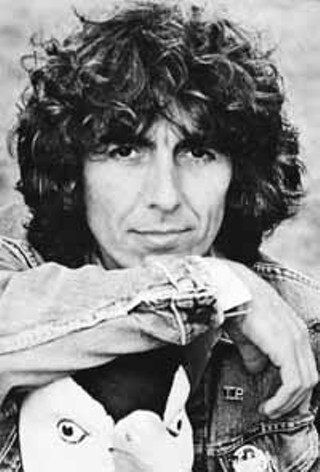 John Lennon's murder 21 years ago this week put many people in touch with horror, but it's the cancer-related passing of Lennon's former bandmate George Harrison on Nov. 29 at age 58 that's giving those same people a deep sense of mortality. As a Beatle, Harrison need never have set foot in Texas to have left his imprint here, but set foot he did. The Beatles notably performed at Houston's Coliseum in August 1965, and Harrison's last onstage nod in the Lone Star state would have been at a Fabulous Thunderbirds Riverfest, but his rumored guest spot turned out to be just that -- a rumor. Jody Denberg, who attended the last stop on Harrison's 1974 Dark Horse tour (his sole U.S. jaunt, which started in Fort Worth), recalls that the rumor stemmed from Dave Edmunds' appearance at the Fest and the fact that Edmunds had enlisted Harrison and Jimmie Vaughan for a recording session after the Edmunds-produced Tuff Enuff album was completed, and before the reclusive Harrison returned to the spotlight with the Traveling Wilburys. That recording, a Bob Dylan cover which appeared on the soundtrack for Porky's 3 of all things, was a typically gentle yet spry Harrison effort, yet one which didn't really fall into any of the standard Harrison characters. And there were numerous Harrisons along the years, make no mistake. The mop-top Beatle (1962-65), the quiet Beatle (1966-70), the spiritual mystic (1971-73), the lawsuit-weary Dark Horse (1974-76), the radio-savvy "Blow Away" Harrison (1977-80), the post-Lennon recluse (1981-86), the Jeff Lynne/Wilbury Harrison (1987-90), and the "Threetle" (1991-96). The last half-decade saw little public awareness of Harrison -- and vice versa -- but just prior to his death, there was a sputter of activity. Perhaps in defiance of an increased awareness of mortality following his stabbing by a fan in 1999, or perhaps simply because it was time once again, George prepared and issued a remastered edition of his classic All Things Must Pass album -- the original sessions for which were the spark for the creation of Derek and the Dominoes -- and began working on new material with the Pythonesque working title Portrait of a Leg End. A new song, recorded for a Jools Holland project released weeks before Harrison's death, bore the stamp of finality, however: Harrison issued the tune with the ominous notation "R.I.P. 2001 Ltd." On the heels of Harrison's passing, much memorializing was done, in Austin and around the globe. KPEZ-FM, aka Z102, spent Friday as an all-Beatles station, ending their memorial session with a candlelight vigil at B.D. Riley's Irish Pub, while local popsmith and uncanny Beatle re-creator Darin Murphy, who says George was his favorite of the Fabs, published a tribute essay on his Web site at www.darinmusic.com. Monday, many Austinites joined in the international moment of silence called for by Harrison's family. Denberg, for his part, can't understand the Beatles emphasis dominating the obits and tributes to George, offering that "I'm still struck by the fact that his greatest contribution is as a Westerner who opened people's minds to Eastern thought. John Lennon's pulpit was peace. George's was peace of mind." Even so, and even though Harrison's words and music will live on beyond his mortal shell, there are still guitars and guitarists around the world right now gently weeping.

Just when I was wondering where the ...Trail of Dead had meandered off to, along comes an advance for their Interscope debut album, plus a four-song CD EP. The album is currently self-titled, but since the group's first album was self-titled and the EP has mistakenly been stickered as s/t as well, I wouldn't be surprised if the new disc sprouts a name before it comes out to avoid further confusion. (Though releasing two self-titled albums has certainly worked wonders for Weezer.) Also, seeing as how the self-titled full-lengther doesn't hit the racks until February or March, fans had better ration the songs on the EP as best they can -- unless they download the album from one of the various Napsteroids long before then... Predictably not much Austin action in SPIN's "Year in Music 2001" issue, but then again, what do you expect from a mag that still puts Kurt Cobain on the cover at least once a year and dumps the new Ozzy, Jagger, and McCartney albums together in a little box marked "geezers"? Among their top 20 albums of the year, Lucinda Williams manages to take the No. 13 spot with Essence, which SPIN says is "like a novel that's every bit as powerful as the country-blues short stories we've come to expect." Also, Spoon's "Everything Hits at Once" hits No. 16 on this month's SPIN 20, with the notation "Sort of like how we felt when we first saw the 'Paranoid Android' video but a little less intense." More end-of-year madness to come as December/January issues of music mags keep coming out... Local singer/composer/attorney Marilyn Rucker has won a Billboard songwriting award, placing second in the jazz category for "Leaving B"... On "Goodbye," the opening track from Silver Scooter's most recent album on Peek-a-Boo Records, Scott Garred sings, "I wanna live in another town," and he has since announced that he's moving to Portland, Ore., in January to go back to school and live closer to his family in Washington state. Silver Scooter is calling it quits after their gig next Saturday, Dec. 15, at the Hole in the Wall. Garred has also released several solo albums under the moniker of Super XX Man and says he will continue to write and record music under his own name... Cotton Mather's new record is called The Big Picture, but don't look for it in the USA. It's out in the UK, continental Europe, and Australia over the next few months on the Rainbow Quartz label. It's had positive critical response, says frontman Robert Harrison (no relation to George), with "reviews of four or five stars everywhere except for Q, who have always objected to Cotton Mather, and NME, who have moved away from rock." As usual with CM, they actually finished The Big Picture a year ago but then faced various delays. As such, the band have headed to Europe for shows and press work, with no firm plans on a U.S. release yet... Finally, the rumors are true -- look for the Bottle Rockets to release a Doug Sahm tribute album as their next full-length effort, sometime early next year...

"Do you have a coupon for that, sir?" Expect the Derailers to be practicing that phrase on the road, as Sony has come up with a unique promotional idea for their return to Austin next week. The band members will be working behind the counter at various Wherehouse Music locations next Tuesday from noon-4pm. "We're just trying to give the employees a little break," joked Tony Villanueva via cell phone as the group neared Chapel Hill on Monday afternoon. He adds that he has no idea which store he'll be working at, saying the band would be flipping coins to make the decision, and that the whole stunt will make money for a charity not decided on at press time. (No word on which band members actually know how to operate a cash register!) The band also makes another visit to the Grand Ole Opry soon, but it's Dec. 22 at the Broken Spoke they're really looking forward to -- because that means they'll be back in Austin for the first time since August! "We are really looking forward to coming home for the holidays," Villanueva sighs. Then the Derailers get back on the road, er, the waves for the New Years' Cruise with Delbert McClinton (who Beatlemaniacs might remember as the guy who taught John Lennon how to play harmonica). If you wanna wait a couple of months before hitting the water, note that Shelley King, Slaid Cleaves, and Shake Russell & Dana Cooper are the invited artists on the Texas Music Sweetheart Cruise. The cruise will leave out of Galveston on Saturday, Feb. 16, and return Feb. 21. Destinations include Cancun, Cozumel, and Calica, with prices starting at $699 per head for meals, your stateroom, and gratuities. Details at www.shelleyking.com... For those who've wondered whether Dino Lee's club Ocean's 11 would have to go into hiding when Steven Soderbergh's remake of the movie by the same name came out, think again. The Alamo Drafthouse Cinema is collaborating with Ocean's 11 (the bar) for a big fiesta at Alamo North for the opening night of Ocean's Eleven (the movie). For the late show on Friday, at 9:50pm, Lee, aka Mr. Fabulous and Casino Royale, will perform live in person, singing the hits of the original Rat Pack's Ocean's Eleven. After the movie, you get free admission and a discount drink coupon to the Ocean's Eleven afterparty at, naturally, Ocean's 11. Just make sure you get outta there when the clock strikes 2am!... Sinis' next-to-last show is this Saturday at the Flamingo Cantina. You'll have to attend to find out which one of my ex-roommates was set to be the band's new regular bassist before they decided to call it quits. And while we're on the subject, say goodbye to Chronicle Associate Music Editor/U2 freak Christopher Gray, who's heading to New York next month to find fame, fortune, and Tim Stegall, leaving me stuck looking for another roommate while he tries to hook up with Saturday Night Live's Tina Fey. ("Or Maya Rudolph," he adds. "It's all good.") Yep, full access to the VHS tape, record, comic book, and video game collections are once again up for grabs to some lucky schmuck -- get your name in the lottery by e-mailing gray@austinchronicle.com...