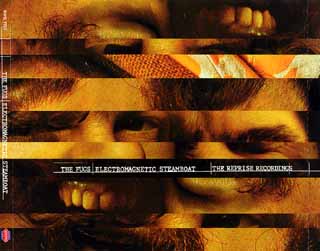 Electromagnetic Steamboat: The Reprise Recordings (Rhino Handmade) Despite harboring occasional artistic pretensions, the Fugs shone brightest when they crawled into the gutter sporting eighth-grade hard-ons. Formed in 1964 at New York's Peace Eye Bookstore by poets Tuli Kupferberg and Ed Sanders, the Fugs initially transcended their lack of musicianship with a toxic mix of revolutionary sentiment and back-alley prurience recalling 18th-century English literature's hidden thread of explicit sexuality. The band's classic ESP LPs commingled protest anthems like "Kill for Peace" with naughty bits like "Coca-Cola Douche." Such horndoggery might squeak by with a PG-13 rating now, but in the mid-Sixties, it invited FBI investigations. The resulting cause célèbre also led to a deal with Reprise. Electromagnetic Steamboat, a limited pressing available at www.rhinohandmade.com, is a 3-CD compilation of the Fugs' complete Reprise output along with five songs from an unreleased Atlantic LP. Their 1967 Reprise debut, Tenderness Junction, found the Fugs reigning in their libidinous impulses and expanding their musical horizons. Though Tenderness Junction is hardly seminal, the album retains historical import with Allen Ginsberg providing vocals on "Hare Krishna" and a field recording of Sanders "exorcising" the evil spirits from the Pentagon. It Crawled Into My Hand, Honest is the highlight of the Fugs' Reprise material. Reprise bankrolled several composers and arrangers along with Harry Belafonte's backup singers to provide sonic bombast to the band's righteous hilarity. By comparison, the sparse, acoustic nature of The Belle of Avenue A falls flat, though the title track's tale of a truck driver's one-night stand with a hippie chick oozes merit. Golden Filth, recorded live at the Fillmore East in 1968, recasts many of the band's bawdy ESP songs like "Slum Goddess" and "Supergirl" with fleshed out arrangements. Devoid of grandiose aspirations, this album is the band's most blatantly comedic effort for Reprise. Stickered at $50 (plus tax and shipping), Electromagnetic Steamboat is bound to be a tough sell for casual fans, but once the completists have their day, perhaps Rhino will boil this set down to one solid best-of disc.