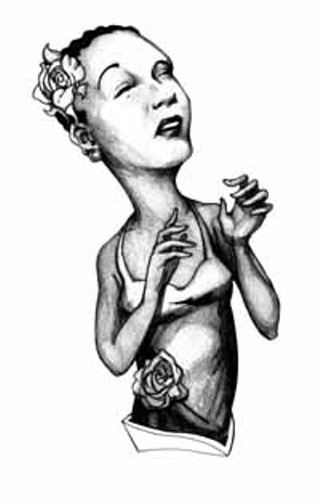 Lady Day: The Complete Billie Holiday on Columbia 1933-1944 (Columbia Legacy) You couldn't have made her up. Elegant yet earthy, successful yet tragic, Billie Holiday had the makings of a character straight out of fiction, one that embodied everything good and bad in jazz. With a nightmarish upbringing that included rape and pre-teen prostitution, Holiday's admiration of Bessie Smith, Ethel Waters, and particularly Louis Armstrong kept her eyes on the prize. Discovered by producer John Hammond, Holiday's resultant relationship with Columbia-affiliated labels (Okeh, Vocalion, Brunswick) lasted through the finest years of her career. Collecting those recordings in their entirety for the first time, Lady Day is a long-overdue 10-CD retrospective with illuminating unreleased material. Her first sides, cut with the Benny Goodman band in 1933, reveal a young talent without much to distinguish her from the pack. A year later, when she resurfaced on the first of many sessions with Austin-born pianist Teddy Wilson, the change was remarkable. Her vocal range was limited at best, the material made available to obscure black artists by publishers ("What a Little Moonlight Can Do," "Eeny Meeny Meiny Moe") representing the worst Tin Pan Alley had to offer. None of this held her back. By 1936, "I Cried for You" sold five times what the usual Wilson/Holiday 78 did, and it's easy to see why. From Johnny Hodges opening alto salvo to the first sweeping "I-I-I" sung by Holiday, it's a command performance. With her distinct pronunciation, set in slow triplets against the swing beat, ("Ev-ree road has turn-ings"), she twists her phrasing, adding blues intonations in the most unlikely places. Holiday later led her own sessions, returning periodically to record with Wilson's band, which for a time featured the tenor saxophonist with whom she would form a special bond, Lester Young. He dubbed her "Lady Day," she called him "Pres." At their first meeting, both give a bittersweet reading to "I Must Have That Man" that would characterize their long relationship. As Holiday's stature grew, so too did her personal problems. The same morose side that created her most famous composition, "God Bless the Child," led to abusive relationships, addictions, and myriad legal problems that ultimately consumed her. Not yet 45 years old, she died alone in 1959, under arrest in a guarded hospital room. Lady Day spares us the pain that haunts Holiday's later work, and instead presents a singer at the peak of her powers, one that captivated the world in a way few entertainers ever have. While housed in a stylish 78-type book, the inside of Lady Day is flimsy; the book is printed on dull stock and full of unnecessarily pithy track notes. Gary Giddins' essay is first-rate, yet Farah Griffin's is silly, and misses the date of Holiday's death by a decade. Holiday would have taken such treatment in stride. She lived her life as though the weight of the world rested on her shoulders. Yet instead of bitterness, she left us one of the great gifts of the 20th century. It all starts here.