Dr. Ralph Stanley, a Tradition All by His Lonesome 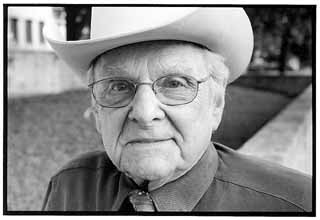 Bluegrass, old-time, mountain music -- the genres to which Dr. Ralph Stanley is variously assigned -- have never achieved wide popularity, so it's no surprise that the 74-year-old banjo pioneer doesn't enjoy the name recognition that other American musical greats enjoy. Perhaps only those who know their three-finger picking style from their clawhammer can truly appreciate Stanley's virtuosic playing, but nobody who hears his voice walks away unaffected.

His tenor, unlike the smooth, piercing high lonesome quality that typifies bluegrass vocals, has a hardscrabble quality to it, at once rough and sweet, weary and mournful, almost impish. In the 1940s, when he was a 20-year-old making his first records with his brother Carter, Ralph could easily have been mistaken for a septuagenarian. When he laments, "I've seen trouble all my days" in the Stanley Brothers' 1950 version of "Man of Constant Sorrow," it's shocking to think that his days had only added up to 23 years at that point.

When he sings murder songs, "Pretty Polly" or "Little Glass of Wine," you tremble like the young victims immortalized in the lyrics. When he asks the reaper to spare him over for another year in his a cappella rendering of "Oh Death," it's with every bit of sincerity he can squeeze out of his weary bones. When he sings gospel, it's enough to make the staunchest atheist into a believer. And that's just solo. In harmonies -- with his brother Carter, with various editions of his Clinch Mountain Boys, and more recently, with his son Ralph Stanley II and the parade of stars that recorded with him on his two recent duet albums -- it's Ralph's contribution that you feel in the back of your throat.

With an honorary doctorate from Lincoln Memorial University in Harrogate, Tennessee, where he taught briefly back in the Seventies, Dr. Stanley really is a septuagenarian today, still playing upward of 150 shows a year. Better yet, at this late stage in his career, he's finally on his way to becoming a household name thanks to the success of the Coen Brothers' film O Brother, Where Art Thou? The triple-platinum soundtrack, which features Ralph's solo "Oh Death" and the Stanley Brothers' 1955 recording of "Angel Band," has exponentially multiplied Stanley's audience.

On Nov. 7, the soundtrack took Album of the Year and Single of the Year at the 35th Country Music Association awards. Stanley led the show's finale, marking a coup of sorts for those who think the Faith Hills and Brooks & Dunns of the world being labeled "country" is unfortunate at best. I spoke with Dr. Stanley on the telephone at his home in Dickenson County, Virginia, shortly before Thanksgiving, about his recent successes, his life as a hard-working musician, and where he sees it all going in the future. Though not a man of many words, he was humble, professional, and kind, the simple power of his voice amplifying his sentiments many times over.

Ralph Stanley: Ooh, have mercy. [laughs] You did go back, didn't you? I guess my first memory was when I got my banjo. My mother tuned it for me to try to teach me to play a little.

AC: Do you remember what you first learned?

RS: "Shout Little Lulie." Oh, you can dance up a storm with that.

AC: You've been an entertainer for most of your life. What do you do for entertainment?

RS: You know, I listen to my music a lot. I listen to Stanley Brothers music. When I take a notion for a good country song, well, I like George Jones. Old traditional stuff. I don't like the new kind they're having now.

AC: In the film O Brother, Where Art Thou?, your song "Oh Death" was lip-synched by a klansman. Did they warn you ahead of time that your song would be used for that?

RS: No, they didn't. I didn't know anything about it until I saw it.

AC: Were you shocked?

RS: Yeah, in a way. In a way, I was. But you know, that fellow, he took his suit off later, you know, and showed who he was.

AC: Has there been any fallout from having your song associated with the KKK?

RS: No, not that I know of. I think people understand that it's just a movie. I've had people ask me, but you know, most of 'em knows that it wasn't me. Some might not, but I sure wasn't in that outfit.

RS: It certainly did. It's the first time, I guess, that any of this old-time music ever did that.

AC: Might that bring a groundswell of popularity for old-time and bluegrass music?

RS: I think so. I think that'll be your next trend. Yeah, I believe it's on its way. You know, we're having sold-out crowds everywhere we go.

AC: The Stanley Brothers haven't been inducted into the Country Music Hall of Fame. I think there's something wrong with that.

AC: You sell your banjos at your shows. Have you sold many of them?

AC:So Austin should get 'em while they last! You were in town in May, and you've been on Austin City Limits quite a bit over the years. Do you remember the first time you played here?

RS: Not really, I don't. It's been several years ago. I used to play that big club that they tore down over there. What was that? I can't remember the name.

RS: No, it was a big auditorium thing. It's been 10, 15 years since we played ... Armadillo Club! Are you familiar with that?

AC: Armadillo World Headquarters, of course. Your upcoming Austin performance falls on the 35th anniversary of Carter Stanley's death. Do you have any favorite stories you like to tell about him?

AC: Your son, Ralph Stanley II, is the lead singer in your band currently, right?

RS: Yes ma'am, he's the lead singer, doing a good job. He's recording a little bit on his own; he's already had a couple of CDs on his own. He's recorded a third one, it'll be out in January sometime. And he can sing what they call bluegrass, and he's a good country singer, too. He's good at both of them, I think.

AC: He's been playing since he was little.

AC: Do you consider yourself a master of the banjo, or are you still trying to grow as a musician?

RS: Well, no, not really. I don't play the banjo too much anymore. I play it some, but I've sorta went to singing more. And I have a young banjo player [Steve Sparkman], about 29 years old, that plays note for note. You can't tell him from the way I used to play. I still play it some, too, but he plays with me all the time.

AC: What stands out about the recording sessions?

RS: I liked about all of them. I wanted to get my favorite singers to help me sing. Melba Montgomery, she's a singer from several years ago. I don't know if you've ever heard of her or not ...

AC: I loved when she sang with George Jones.

RS: Yeah, she's a fine singer. We did one of Hank Williams' songs. And then of course Dolly Parton helped me. And Sara Evans. She sold over a million records this year. And Pam Tillis. She sung with me. And you ever hear of Joan Baez? She sung with me. And I believe Ralph [II]'s wife, Kristi Stanley, she's singing one with me. I believe it's 15 girls, and 16 songs. Iris Dement did two songs with me on it. Is Iris Dement from Texas, somewhere out there? And Lucinda Williams. Jeannie Seely sung with me. I can't think of all of them. Yeah, every one of them did a perfect job.

AC: What about the duet album previous to that? You worked with Bob Dylan, for example. You're one of his heroes.

RS: He recorded with me on what they call Clinch Mountain Country. That's when I recorded with all country [artists], male and female. Thirty-one different artists sang with me on that, and we had 36 songs on a double album. And I liked Bob very well. We did a good job, I thought, and he was nice. The only things I've got to say about Bob are good.

AC: Do you have an opinion on the current state of bluegrass, where it's going?

AC: Do you think there are enough musicians to carry on your traditions?

AC: Does that make you sad? Would you like to see it carry on, or do you think it's okay to leave it in the past?

RS: I think my son will carry it on enough. And then there'll be a lot of real young kids now that love my style. And there'll be more, as time goes along.