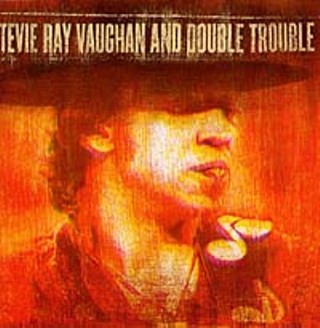 The booing begins three songs into that first 42-minute set from 1982, harsh reward for a typically toe-tapping "Pride and Joy." It's louder after the band's next tune, a 10-minute toiling of "Texas Flood," which Live at Montreux rightly reminds us won SRV & DT its first Grammy that same year when the track was issued on a seemingly random Atlantic Records compilation, Blues Explosion. Thank you, Jerry Wexler! In fact, it was said label mogul who landed the Austin trio a spot on the renowned jazz festival's lineup following an out-of-body experience at one of their Continental Club gigs. "Having never traveled a lot," writes DT drummer Chris Layton in this two-disc set's liner notes, "a trip to Switzerland itself seemed exciting." All that way for booing. Everyone was heartbroken, Stevie most of all. It's audible after the mixed reception of a hot 'n' heavy "Dirty Pool": the band tosses off "Give Me Back My Wig" and equally disposable "Collins Shuffle" like they just want off-stage so they can lick their wounds. Which they did -- at the bar. Where they met David Bowie, who offered SRV all the leads on Let's Dance, and Jackson Browne, who offered up the home studio where Texas Flood was recorded. When the Lone Stars returned to Montreux three years later, this time as a quartet including keyboardist Reese Winans, it was an altogether different ballgame. "Three years ago tomorrow," pinpoints Vaughan just before the encores. "First time we got booed, first time we got a Grammy." That 1986's underachieving Live Alive garnered no golden statuette is apt; the period just prior to Vaughan's sobriety still betrays a ragged live powerhouse. Disc two of Montreux, five songs of which originally appeared on Live Alive, is no different. "Tin Pan Alley," featuring Johnny Copeland and issued last year on the posthumous SRVDT release Blues at Sunrise, is the highlight, while David Bowie's revealing and heartfelt essay herein is another. The rest, as they say, is history.