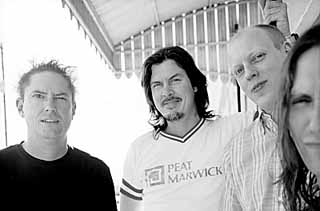 "What a fuckin' ferryboat ride to Shitsville!" exclaims the always outspoken Gibby Haynes of his recent visit to the set of the Late Late Show. The Butthole Surfers took a few hours' break from their current tour and performed their new single "Dracula From Houston" on the show last week, leaving Haynes far from happy with host Craig Kilborn (or as Haynes calls him, "Stillborn"). "I must've scooted in front of him at the Viper Room once," guesses Haynes. "I don't know what I did to that creep, but he sure showed us, didn't he?"

The "showing us" of which Gibson speaks included poor sound, Kilborn's refusal to say the band's name aloud, and a band member getting smashed in the mouth with a microphone midsong by a clumsy cameraman. Haynes confesses that the impetus for the real or imagined bad feelings on Kilborn's part "could've been certain hand gestures I made during soundcheck."

Tour-wise, Haynes says there have been more good gigs than bad, but that the bad ones have been horrid. The kickoff show (always a tough one for the band due to their elaborate effects) in Houston fell into the latter category: "I guess we just panicked. We panic and then it's hard to regroup. The momentum was on the venue's side. We were really pissed off; they said it was a 1,500 seater that they had restructured ... what do they call that? They had a big, long, flat balcony that was basically kind of an elevated version of the floor, and they wouldn't let people up there, so it was fucking bin Laden's hangout; it was a complete cave."

And in Los Angeles: "We were so-so, but the crowd was really nuts. There were chairs being thrown off the balcony, girls assaulting security guards, blood, and security people with attitude and retarded security people. And during the soundcheck the monitor guy goes -- there was this low-end feedback when we finished a song, like woooah-woooah-woooah-woooah. I go, 'Do you hear that?' and he goes, 'I can't hear anything!' So we got a fuckin' monitor guy who was deaf -- he just straight up admitted it! That's a bold vocation for a deaf man."

And what does Haynes have to say about the Austin show this Saturday at La Zona Rosa? He's got some problems with it: "Twenty five bucks, plus a $5 surcharge? What kind of asshole's in charge of that pricing system?!? Twenty five bucks is too much to pay to see any rock band. I mean, the Eagles, Madonna, they can blow me with their $100 tickets."

As far as the band's notorious back-projection films, Haynes promises "a little old, a lot new." Set lists from across the tour promise just the opposite musically, making the current tour a treat for old fans wanting to hear classic Butthole madness like "The Shah Sleeps in Lee Harvey's Grave," "Dum Dum," "Cherub" and such, along with two or three songs from the new Weird Revolution. Whether he's happy about the ticket prices or not, Haynes promises a hot show.

"We're playing really good," he says proudly, "And if it weren't for all the cocksuckers and retards, we'd be doing better."