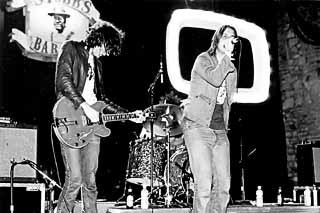 Some shows are all about the music. There's no pretense, and the people there are true fans, eager to listen, not talk. This was not one of those shows. Nope, this was a Scene with a capital "S." We're talking about a band who filled up Stubb's outdoor stage nearly on reputation alone. "Have you heard them yet?" was in the air before the show, as god-knows-how-many shelled out the $15 based purely on the nuclear hype machine, having never even heard the band. Once the Strokes hit the stage, though, one glance reveals part of the reason: the look. They've got it, absolutely. Especially singer Julian Casablancas, who's inherited his photogenic face from his father, modeling agency svengali John Casablancas. The five NYC lads, the majority of them clad in leather or jean jackets that scream Big Apple, sported a variety of archetypal rock & roll hairdos, ranging from the Cobain cut to the Dylan shag. And they played music too. Cutesy opener "Is This It" sounded a lot better than it should have after the abrasive antics of the Moldy Peaches, the jokey support band decked out in fake afros and clown suits who were as bad as their name, possibly even worse. A calculated move by the Strokes' A&R department to make them sound better? If so, it worked. Aggressive yet remarkably polished for sub-25-year-olds, the Strokes sport a classic sound. Classic as in, they sound like a rock & roll band from any era. Their NYC Velvet thing came through on "Soma," which features a punchy two-chord drive and Casablancas taking on a Lou Reed-like diction and, at one point, letting out a Little Richard "whoo!" The loud crackle of twin guitarists Albert Hammond and Nick Valensi, though, injects some Motor City urban heaviness into the affair. The duo, along with Casablancas' raw, distortion-aided raspiness, kept the playfulness of such tunes as the Joe Jackson/Elvis Costello-sounding "Someday" rooted in the realm of rawk. In fact, when the Strokes misfired, which was rarely, it was all clattersmack and attitude, Casablancas' detached raves collapsing through the thin netting of a motionless stage show. The saving grace of the band, though, is the simple melodic bridge that forms in their best songs, like the fine closing to "Barely Legal," or the tuneful interplay of single and evening highlight "Last Nite," sounding at turns oldies rock and harmonically cutting-edge punk. The Strokes took Austin back to the future for an hour, take 10 minutes, and, while nobody's life was changed or generation defined, they made good on their end of the deal, earning themselves some real fans in the process.