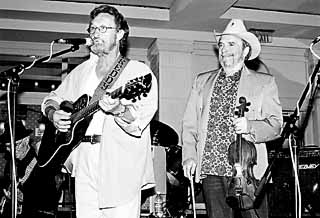 Things have been quiet on the noise front lately, mainly since America has, for the first time in a long while, had better things to do than complain about its next-door neighbors having too much fun. Things are getting back to normal, with only the occasional anthrax scare (the powder, not the "Caught in a Mosh" metal band) disturbing the peace on occasion. Ironically, word has it that Youssou N'Dour, who was expected to reschedule the show canceled in the wake of the Trade Center bombings, will not be doing so, while Nick Cave, who wasn't expected to reschedule, will be coming to town in February. Time hasn't stood still, but there's been little progress in the case of the Sheraton Hotel suing the Empanada Parlour for allegedly driving away customers with loud world music. "We are still unresolved," sighs booker Damon Lange, who says the last mediation meeting between the two parties looked promising, but then the Sheraton passed things on to their lawyers. When the agreed-upon set of compromises came back, Lange says, they were saddled with numerous "out of the blue" details that the Parlour found unacceptable. Lange says the last time the mediator went back into the fray was last Thursday; he hasn't heard anything since. Currently, Lange adds wearily, "I'm so buried in paperwork, I can't do my job." Elsewhere, a subcommittee dedicated to resolving the noise issues of Central Austin has upped their meeting schedule to twice a month. That group's still in the organizational stages, however, and no news is expected to come from that front for awhile. The world continues turning, though, and among the stranger things one might have encountered earlier this week was Merle Haggard shooting a video along Red River on Monday, following his attendance at the "roast" of his guitarist Freddy Powers' 70th birthday and preceding his gig tonight (Thursday) at Gruene Hall. Some scenes were shot at the entrance of Beerland, which had been transformed into the more subtly named "Kindred Spirits" for the occasion, via a sign hung over the real one. Note to the Beerland gang -- keep that sign and the new name; it still implies boozing but doesn't necessarily scream "over 21 only!" Even out at the Saxon Pub, things are cautiously optimistic. Booker David Cotton says that business hasn't been the greatest of late, but that's not stopping the Saxon from actively seeking a second location on the north side of town. So far, they're not close to finding an appropriate location, but they're still looking to accommodate those people who still have a superstitious fear of crossing the river. Meanwhile, Cotton's getting by on those special moments you only get from running nightclubs, like last Saturday when Van Wilks convinced Dave Mason to eschew Antone's in favor of joining Guy Forsyth, Carolyn Wonderland, and Wilks at the Pub for a version of "Feelin' Alright." On the other hand, one venue that's desperately looking for new ways to get people to come out and see bands is the Flamingo Cantina, who are starting up a series of "Music Industry Appreciation Nights" this Tuesday, with no cover, $1 well drinks and cheap beer, and of course live music. The first show is this coming Tuesday, with Super Heavy Goat Ass, Black Novas, and Activator ("the loudest band in Austin"). The idea, says the club's David Goren, is to "showcase acts that are really good but are having a hard time drawing crowds." Sure enough, one of the saddest things I've seen in a club in recent memory was when I walked into a completely empty Cantina, with not a single soul inside except the (mercifully nameless) band onstage, and the oblivious frontman chirped without irony, "I'd like to thank all you folks for hanging around." Goren says he hopes the "party atmosphere" engendered by the cheap drinks will at least make people think they enjoyed the bands and thus recommend them to friends. "What else can we do?" asked a frustrated Goren, looking up and back behind the club to where more residential construction is rumored to be occurring in the near future. Meanwhile, there's still plenty of opportunities to do your patriotic duty and have fun at the same time. For instance, check out "Stand Together: Victims of Terrorism Benefit Concert" at the Red Eyed Fly this Saturday night from 8pm-2am. Gabrielle Faust is the organizer of the assemblage, with Noah, Chris Toast Trio, Hot Like Love, Bedbug, Grand Champeen, and Human performing.

Gal's Panic are reuniting for one night only, at Emo's this Saturday, with original members Lance Fever, Jerm Pollet, Connor Herrington, and "not Stone Cold" Steve Austin, with Ringer and Skate or Die opening. Expect most of the songs from the band's I Think We Need Helicopters CD... Dynamite Hack has posted new song "Hey Sandra" at their Web site (www.dynamitehack.com), and yeah, it's about that Sandra... Which reminds me: that Bob Schneider just doesn't know when to quit. A recent live review in Variety wanted desperately to love the Schneid, reveling in his songwriting skills, calling him "an appealing frontman -- his liquid gaze softening his chiseled jaw and square forehead, making him look like Dawson's Creek's Joshua Jackson cast in the WB's version of "The Henry Rollins Story,"and even plugging the band members (bassist Bruce Hughes, drummer Michael Longoria, and guitarist David Boyle) for a change. However, Schneider's refusal to trim down his all-night-at-Antone's set for the jaded Hollywood crowd at the Roxy led to the piece being headlined "Bob Schneider Overstays Welcome." Aside to Bob: Any advice that tells a musician to do less work is good advice... Lance Farley from Honky reports his band will play their first show in five months Saturday at Room 710 with the Spiders, Cruel & Unusual, and Blood Burnin'. After that, they're flying to Arizona to play a tattoo shop grand opening in Tempe and record at the school that Jeff Pinkus is going to at the moment... No, former Austinite Mike Alvarez is not hung up on Roky Erickson. It's pure coincidence that his new band Head Shop's debut CD is called Sounds of Everywhere, a combination of Thirteenth Floor Elevators album titles Easter Everywhere and Psychedelic Sounds of.... It's a further coincidence the disc includes a cover of the Elevators' "Don't Fall Down," with guest background vocalist Texacala Jones... The rumors were true: Dino Lee was dead serious about running for mayor this year. He abandoned the plan at the last minute, however, deciding he had more than enough on his plate already between his band and his Ocean's 11 nightclub. Hopefully, by the time he gets a chance to run again, Austin will still have bands and nightclubs... Over there, over there: On Nov. 12, 12XU will release Spoon's 1998 album A Series of Sneaks for the first time ever in the UK and Europe. This issue features three songs not included on the U.S. version. A double A-sided CD single for "Car Radio" and "Advance Cassette" will be out Nov. 26 in the UK as well... "Not since George M. Cohan took on WWI has a modern composer been so inspired by a country at war." So says the new press release for Dick Price, who has been writing furiously, penning seven new songs in as many days for a project he is calling, Songs From the First Weeks of the War. Dick's staff (snicker) predicts that songs like "Over There," "When Johnny Comes Marching Home Again," and "Yankee Doodle Dandy" will soon be forgotten, and replaced with Price's spirit-lifting tunes "10,000 Spores," "Towelettes Over Afghanistan," and a rally cry for the folks at home, "We're Ironing Our Mail." You can hear the first of these tunes, "Osama, Come Out of Your Cave" online at: www.mp3.com/dickprice. You see? I'm not making these up. Honestly...