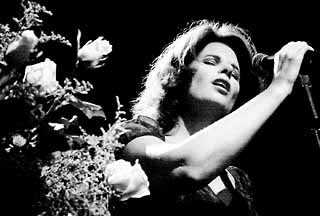 Unlike similarly configured bands of the same general age, say 10,000 Maniacs or Edie Brickell & the New Bohemians, the Cowboy Junkies have never achieved mega-popularity, and as evidenced by their latest release Open, they continue to grow musically without getting overly mystical or just plain goofy. It's true, on previous tours they may have taken themselves too seriously, with hundreds of candles surrounding them while they performed, and a stillness to the atmospherics some may have found oppressive. On the other hand, as the two sold-out shows at Austin's One World Theatre proved, others relish their sense of quiet and find their musical introspection exhilarating. Where previously singer Margot Timmins was shy and overly self-conscious on stage, she's grown quite capably as the Junkies front person, sharing stories between songs and even hawking the bands' wares and Web site. Musically, the band seemed downright sunny compared to some of their previous shows. While concentrating on songs from Open, which has an almost psychedelic feel to it in spots, they used some textures that led them to a brighter pop sound. Especially captivating was the "River Song Trilogy," a song cycle that's stretched over three albums, the final part of which appears on Open. It demonstrated the great range the Cowboy Junkies are capable of, from deathly quiet to a thunderous roar. Displaying their continued affection for the music of Townes Van Zandt, their take of his "Highway Kind" was appropriately somber and morose. Unfortunately, the connection between band and audience never really took hold, and that seemed to distance the audience from the band; maybe it was the sterile, TV-studio ambience of the room. During the encore, they made an unusual choice by performing Springsteen's "Thunder Road." A song that deserves to soar, the Junkies' version never really got off the ground. It was much like the set that preceded it. The band appeared to be giving a valiant effort, but the end results were less than satisfying.