Jesse Dayton brings it all back home 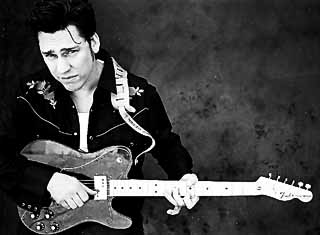 There's sure a lot of Texas flag-waving going on in music these days. Songs about Lone Star tallboys, Willie, Waylon, the Hill Country, ranch roads, sunsets, and every other kind of Texana you can think of. Texas bands carry a unique cachet dating back to Doug Sahm, ZZ Top, and even Ernest Tubb. The latter-day Texas country thang strikes a chord with the state's musical audience -- especially on college campuses -- for all the obvious reasons, and well it should. It's not like the guys doing it moved here from Michigan.

How many Texas musicians can say, though, that their granddad was a Beaumont fire chief who used to hang around with Bonnie and Clyde when they'd breeze through town? Or that their dad went to high school with George Jones? Jesse Dayton can lay claim to both, and you can't get much more (East) Texas than that.

Dayton sits back on a vinyl couch embossed with a Western design and sips a Dos Equis, the TV tuned to a baseball game. He's living in a duplex in South Austin these days, but for someone casually lumped in as an Austin musician for years, his path from Beaumont to Austin has been anything but a straight shot down Interstate 10 and Highway 71.

A year ago, Dayton was ending a several-year stretch of living in Los Angeles and trying to get out of his contract with Justice Records, the Houston-based label that released his first solo effort Raisin' Cain. The SoCal artifice had begun to wear on him a bit; with a son in Austin and a hankering to head back to his home state, the time drew near to relocate to Central Texas.

Still, the L.A. scene had treated him well. Raisin' Cain, with guests including Flaco Jimenez, Doug Sahm, Floyd Domino, and Johnny Gimble, made it to No. 1 on Gavin's Americana charts. The album's success landed him a gig on George Strait's monstrous 18-stadium "Straitfest" tour. Dayton played at Bill Clinton's 1996 inaugural ball, appeared on TNN's Crook and Chase, and teamed up with Dwight Yoakam's guitarslinger Pete Anderson for a duet. He even landed soundtrack work on television shows including Providence, Melrose Place, and Roswell, as well as the movie Happy, Texas.

Soon after his Crook and Chase appearance aired, Dayton got a call from Waylon Jennings' producer, saying that the country music legend had sliced his finger and wanted Dayton to play on a studio session with Jennings and Johnny Cash. Not long after that, Dayton found himself sitting in on Ray Price's Prisoner of Love album.

"That was one of the great things about living in L.A.," notes Dayton. "I got to hang out with Ray for two weeks, drank tequila, ate Mexican food flown in from Del Rio."

Long before L.A. appeared on the horizon, however, Dayton kicked around Beaumont and soaked in its uniquely East Texas influences. He remembers fondly the Cajun music pumping out of nearby South Louisiana radio stations 24 hours a day -- and being into the Clash.

"I had an FFA jacket and listened to Social Distortion," he says. "But then, I could sing all the lyrics to 'He Stopped Loving Her Today,' which was not what most kids were into. I was wearing a concert T-shirt and trying to wear my hair like Jimmie Vaughan. Fuck, I didn't know who I was trying to be."

An epiphany came in the mid-Eighties when Clifford Antone -- himself a son of neighboring Port Arthur -- caught young Dayton's blues band. The club owner wound up giving Dayton three Chess Records LPs out of the trunk of his car. From there, it was a matter of time before Dayton's band the Road Kings started burning up the highways with an East Texas strain of rockabilly before morphing into the Alamo Jets.

With drummer Tom Lewis, former Wagoneer Craig Pettigrew, and steel player Brian Thomas, the Jets held down a residency at the Continental Club circa 1992-93, at one point opening for Junior Brown for eight straight months. Meanwhile, the Road Kings continued on and off as a unit, releasing three albums over time, the last of which came out last year on Hollywood/ Surfdog Records.

Dayton formed his own label, Bullet Records, and released Tall Texas Tales last year. With various major labels sniffing around and doing a little belly-rubbing, he decided that his own label, with good distribution and a good radio man, was the way to go.

"The guys who have the right idea right now are the rap guys and the hippie jam bands," Dayton reflects. "When they want to take it to the next level, they'll go to the majors and say, 'We want you to work this record for us,' instead of having this out-of-date mentality of, 'Oh, Mr. Major Label Man, please sign me, or I'll never be a star,' which is just kinda pathetic.

"I mean, the Dixie Chicks sold $22 million worth of records but have just $1 million apiece in the bank, and that's the standard cut these days. Those are hard figures. If you have a good lawyer in the music business these days, he'll tell you to bet on yourself, start your own label, and do it yourself."

And the Austin artist appellation? Dayton looks at his boots and cracks a wry smile.

"Isn't that weird?" he asks. "I think it's because when I lived here before, I was married and had a kid, and people tended to think that I was settled down in Austin. Plus, there's the whole Texas music thing in other parts of the country -- and I love living in Austin."

George Jones, the Clash, Social Distortion, Muddy Waters, Buddy Guy, and Cajun music -- that disparate range of influences has given Dayton plenty of cred and enabled him to tour with the likes of Jennings and Merle Haggard on one hand, and the Supersuckers and Tenderloin on the other, not to mention an upcoming outing with Joe Strummer and the Mescaleros.

The influences all flow together on his new release, Hey NashVegas!. There's the title cut's baritone-guitar twang, the South Texas languor of "Heartbreak California," the cry-in-your-beer "Don't Take Yesterday," and the all-out roadhouse swagger of "Roses Ain't Enough." It's all radio-friendly, but sincere, without much in the way of gloss or Nashville hokum.

Waving the Lone Star flag in the post-Jerry Jeff/Robert Earl Keen mold is all well and good and certainly pushes the right buttons with a lot of people. Still, there's a lot to be said for being from Texas and not self-consciously making a big deal about it in one's music. There's a lot more to be said for writing good songs, playing the hell out of a Telecaster guitar, and calling the shots yourself.