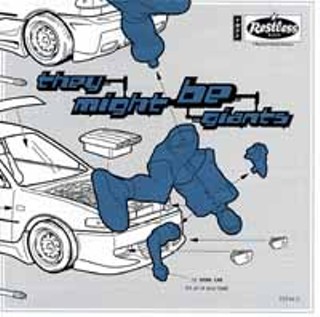 You can tell the age of a music fan by their touchstones; when Dylan went electric, when the brothers Gibb went disco, when They Might Be Giants went "full band." Okay, so TMBG are no Dylan. For one thing, when you scratch the surface of Dylan's nonsensical lyrics, you find Deeper Meanings. Do the same with TMBG, and you still find Slightly Less Nonsensical Lyrics. And yet, who ever expected the two Johns (Linnell and Flansburgh) to go from one-joke novelty to full-fledged touring act, and a damned fine one at that? After a few rocky moments, they managed it, and with Mink Car, they're once again playing to their strengths, applying a techno vibe to their musical manifestos. "Mr. Xcitement" and "Wicked Little Critta" do the hip-hop thang, the former employing gibberish ("The knifey-knife is staben"), while the latter delivers a New Yawk ode to extreme sports that's more Dr. Demento than Dr. Dre. "Another First Kiss" is mellow Beckbeat, while at the other end of the musical spectrum, "Finished With Lies" nabs the key riff from that Beatles/Philips Corporation favorite "Getting Better" and quickly steers it into that bittersweet, overcomplicated territory that only they and Elvis Costello can successfully navigate. The concept of a Mink Car may sound unwieldy, but this one finds the band in high gear and not planning to slow down any time soon. To top things off, the disc includes rehashes of the better tracks ("Older," "She Thinks She's Edith Head") from the band's recent Internet-only CD, which should overjoy hard-core fans -- or enrage them, depending on whether or not they'd already managed to burn the free versions. (They Might be Giants play Stubb's Wednesday, Sept. 26.)