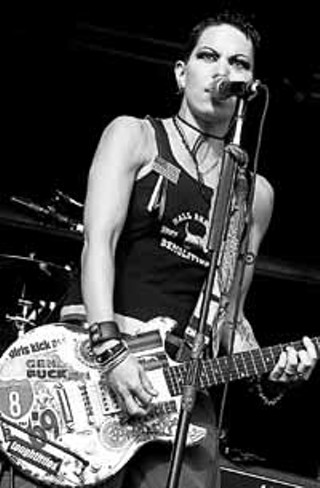 "Who can turn the world on with her smile?" Joan Jett. (Photo By John Anderson)

Freedom was much on the minds of those assembled Sunday at KLBJ's Shore Thang -- renamed, in fact, Freedom Fest -- and much in evidence. The freedom to drink beer from a tube longer than Shaquille O'Neal's femur, and as Joan Jett noted from the stage, the freedom to "shake your ass" may seem like a long, long way from those freedoms threatened by last Tuesday's terrorist attacks, but they're all tied up in the nebulous and vital business of what it means to be an American. Right now, our country is in an uncomfortable gray area of trying to go about our daily lives and rebuild our resolve, while dealing with the immeasurable grief over what happened and outrage toward those responsible. Understandably, that meant the mood of Sunday's assembly was considerably subdued at first, but by the end, the communal healing was almost palpable, and nearly everyone present gave themselves over to enjoying a red, white, and blue rock & roll good time. With the U.S. Army Honor Guard presenting the colors and setting a patriotic tone to start the day -- American flags were literally everywhere, flanking the stage and adorning the attire of at least every other person present -- Austin's gospel institution Bells of Joy then set the musical agenda with their opening pledge to see "the dark clouds roll away." Faced with that charge, the trio of openers each turned in competent, if not spectacular, outings: Austin's Damesviolet, whose meat-and-potatoes rock in a modern style contains the same element of striving toward an unseen goal as Pearl Jam or Creed; Monterrey, Mexico's Zurdok, with sultry, sun-damaged riffs that suggested translating Oasis into Spanish; and Pushmonkey, with a mixture of Nine Inch Nails-influenced slammers and crunchy ballads that verged on nü-metal but never crossed the line. Joan Jett and her shirtless Blackhearts took an hour to prove the extra time spent warming up the kick drum was worth it, favorites like "Bad Reputation" and "I Love Rock & Roll" sandwiched around far-ranging covers including the Mary Tyler Moore theme "Love Is All Around," Rocky Horror's "Science Fiction," and an uplifting "Everyday People." Vallejo put their noses to the grindstone for a spicy set of AC/DC thump and glam-rock flash, the pinnacle of which was MC Overlord's surprise guest shot and an exhilarating "Into the New." Blues Traveler put lumps in everyone's throat right off the bat with John Popper's solo harp rendition of the national anthem before proceeding with an elastic set of hard-charging blues, freeform jams, and "Higher Ground" funky bass pops -- interrupted, notably, by an achingly poignant cover of John Lennon's "Imagine." All that was left was for the Black Crowes was to, as Popper put it, "level the place." This they did, albeit in abbreviated fashion due to the city's noise ordinance, turning in a soulful set drawing heavily from their first two albums: "Sometimes Salvation," "Sting Me," an elongated "Thorn in My Pride," "She Talks to Angels," and "Hard to Handle." It's a natural impulse to turn to music in a time of crisis and uncertainty, and both Sunday's performers and the audience expressed an unflagging desire to, as Neil Young put it in 1989, keep on rockin' in the free world. Let freedom ring.