Texas musicians report from NYC and D.C., Nick Cave and others cancel shows, and the Trail of Dead headline a Red Cross benefit at the Mercury 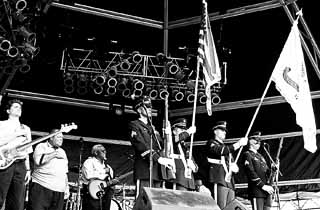 The U.S. Army Honor Guard and the Bells of Joy at KLBJ's Freedom Fest, Sunday, September 16 (Photo By John Anderson)

Get on with your lives, Dubya tells us, and so we shall. In fact, we've already done so. Far from the scenes of destruction in New York and D.C., the only shows that didn't go on in Austin, Texas, were the ones scuttled by transportation troubles. It almost goes without saying that the live music series at Bergstrom Airport has been mothballed "indefinitely," according to director Nancy Coplin, who cites heightened security at the nation's airports and specifically new regulations stating that only ticket-holders will be allowed through the airport's gates. (Bergstrom will, of course, continue playing recorded local music over its P.A. system.) Some of the more notable gig postponements include both Nick Cave & the Bad Seeds (Stubb's, Oct. 9) and Youssou N'Dour (Hogg Auditorium, Sept. 28), the former calling off their North American tour, and the latter postponing his until at least November. Bill Bentley at Warner Bros./Reprise Records, Cave's label, says the Londoner may reschedule his tour for next spring, but methinks that with the former Birthday Party boy being notoriously reluctant to tour in recent years, it may be best not to hold your breath. Other postponements and/or cancellations over last weekend and through this one include Charlie Hunter, John Hammond, Nickel Creek, Grant Lee Phillips, Dave Edmunds, the Ex, Jimmy Eat World, and false Goat Boy Jim Breuer's Heavy Metal Comedy Tour, who was to have played La Zona Rosa this Sunday (though Direct Events admits Breuer's show may have canceled due to catastrophic ticket sales as much as anything else). Texans-cum-NYCers strove to assure friends they were okay, from Walter Salas-Humara ("Going ahead with tour dates") to Tim Stegall ("Alive but weirded out"), while Texas-born Michael Nesmith posted an absolutely chilling screed on his Web site at www.videoranch.com before the smoke had even begun to settle. Brannen Temple, who was in the Big Crater last week, made it back on Monday, but Eric Johnson and Alien Love Child found themselves having to rent a van to escape Canada (he's expected to make his Hanover's date this weekend). Neither tale holds a candle to Asleep at the Wheel's brush with destiny. Ray Benson tells me that the band was scheduled to play a Texas barbecue at the behest of the Prez and Laura Bush last Tuesday. That would have placed them on the White House lawn at approximately the time the terrorists had planned on unexpectedly dropping in. Says Benson, "We would've been assembled on the south lawn at the time that ... the plane, you know ... ." He trails off at the unthinkable. Being musicians, fortunately the spokes of the Wheel were still dozing in their hotel rooms that morning, and "awoke to sirens and confusion." Despite their close call, Benson, who also arrived back in town with his crew on Monday, says he's waiting to see what the future holds, same as everybody else. "We're in the same boat as the rest of the country." That boat has quickly gone from looking like the Titanic to resembling the rowboat carrying George Washington and his hardy men across the Delaware. Professional sports may have chosen to come to a standstill, but music, especially large public gatherings like the quickly renamed Freedom Fest (aka KLBJ's Shore Thang), served as an ideal meeting ground and escape from madness this past weekend. People poured in from all over town to Auditorium Shores on Sunday, walking past the rubble caused by the damage of Smart Growth, no doubt counting themselves lucky they weren't walking through ruins caused by more violent means. Flag vendors hawked their wares on street corners and bands offered up patriotic declarations between tunes. Tesla couldn't make it and Spacehog had already dropped off the bill after breaking up, but the Black Crowes, Joan Jett & the Blackhearts, and locals of various colors (Vallejo, Pushmonkey) found themselves in front of one of the most appreciative audiences they'll ever see. Having raised money for the Red Cross as well as original benefactor the Pediatric League of Austin, the Freedom Fest was a success in that everyone went home carrying a little less of a burden. Benefits continue this weekend, chief among them the American Red Cross fundraiser Sunday at the Mercury, with the unfortunately named ...And they Will Know Us by the Trail of Dead, Rhythm of Black Lines, Wontons, and the Devil, Probably, while I'd think the Toadies farewell gig earlier in the afternoon at Waterloo Park will also see some sort of charitable tie-in. Look also for the Watch America Rebuild (W.A.R.) benefit at the Drink on 6th on Tuesday, that one with Sara Hickman, Shelley King, Mike Rosenthal, Penny Jo Pullus, Dreamtrybe, Daniel Link, and more acts TBA. Let's hope this is the only W.A.R. we're dealing with in the immediate future.

In all the flurry and fury of last week, just about everyone forgot the City Council's budget appropriation last Thursday. The new city budget has left both happy faces and some frowns among the music-related interests hoping for support. The Austin Music Network received $715,000 for the next year of operations (same as last year), and an additional $60,000 went to a project under the title "Black & Hispanic Music Filming." The Texas Music Museum people say they're somewhat disappointed, having received a grand total of $0. A member of the Music Commission postulates that the non-funding may have resulted from the museum's relative lateness in handing the city its proposal. That said, other Texas metropoli, including Houston, are said to be clamoring for the TMM to open within their city limits, and it would be a definite embarrassment for Austin to lose it... Take note, Round Rockers (pun intended), that Gabriel's Nightclub is now Gabriel's Bar & Grill, and will be hosting live music five nights a week, including a Thursday open mike, and an acoustic open mike every other Tuesday... If it just takes too damn long for Friday to come around, keep a look out for T.G.I.Th, a new weekly show from former Gals Panic/Missile Command frontman Jerm Pollet and his Mr. Sinus Theater 3000 co-creator Owen Egerton, in a new musical comedy show wherein the pair "explore life, love, and thyroids." Shows for September include this Thursday and next, beginning at 7:30pm at the NCT Playhouse in Northcross Mall... The new owners of ABCDs (aka CD Warehouse) are living up to their promise of supporting live music so far. Their opening week of performances continues with: Techno Night tonight (Thursday), featuring Infinity and Lunatex, 6-8pm; Rap Night on Friday with Da Entourage, Papa Reu, DJ DMD, and Kiotti, 5-7pm; and Curtis Cole, Malford Milligan, Jerk-U-Lees, RC Banks, Ponty Bone, and the Joe Richardson Express from 1-7pm Saturday... The Black Crowes' Chris Robinson and Oscar-winning (Almost Famous) wife Kate Hudson were seen dining at Güero's with Charlie and Karen Sexton. Of course, everyone gets seen at Güero's, don't they?... OOPS: Contrary to what I was told by Woody at Room 710, Ignorance Park is not breaking up. "As pretentious as it sounds, we're just going on hiatus," says band member John Walker. That break will last at least six months to a year; meanwhile Walker is recording with Colin Gilmore (Jimmie Dale's son) under the name Chalk Outlines, while bandmate Nick Moulos is in the Lord High Fixers spinoff Total Group Sound Action Committee. If I got that name completely right, it's a miracle!...