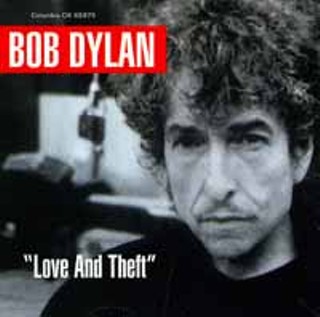 Bob Dylan can't fool us, and he knows it. He's a thief, a con, a 60-year-old with nothing to say. And he continues saying it. "I'm driving in the flats in a Cadillac car," he tells us in "Summer Days," perhaps unaware of how old and white he sounds. "The girls all say, 'You're a worn-out star.' My pockets are loaded, and I'm spendin' every dime. How can you say you love someone else? You know it's me all the time." Maybe. Maybe we love Love and Theft's hourlong séance, instead: Shakespeare, Blind Willie Johnson, Virgil, Sonny Boy Williamson, Frank Sinatra, Old Testament prophets, William Blake, Dock Boggs, Hoagy Carmichael, Big Joe Turner, John Donne, even love itself. All brought back from the dead. "He's not a gentleman at all, he's rotten to the core, he's a coward, and he steals," rasps Dylan on "Lonesome Day Blues," Love and Theft's other 12-bar blues of note, and he can only be talking about himself. When he steals, however, and when he breaks our hearts, he does it with the "nobody sings Dylan like Dylan" bravura of Columbia's mid-Sixties promotions. "Mississippi," a re-recorded outtake from 1997's triumphant Time Out of Mind, is majestically brave. "Po'Boy" is a sequined jumble of lounge jazz and Bukka White blues. "Sugar Baby" is a hymnal chant. "Highwater," meanwhile, the album's masterpiece, is drenched more in multi-instrumentalist Larry Campbell's jaunty banjo than it is any flood we've ever seen. Naturally, the song is dedicated to Charley Patton, founder of the Delta blues, a man whose work Revenant Records will release on seven CDs in October. Dylan won't buy that set, because he probably knows it by heart. He knows it by heart because it is his heart. "You'll never be greater than yourself," one Fat Nancy tells "Highwater"'s anti-hero. "I told her I didn't really care," he growls back, more liberated than he sounds, backed up by his dangerously talented touring band: David Kemper's rumbling drums, Charlie Sexton's acoustic rattling, Tony Garnier's bouncing bass. The old man's not kidding around. "High water ev'rywheeere."