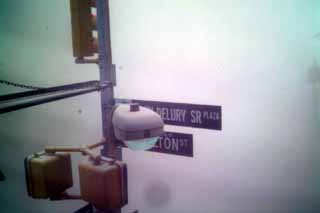 Former Velvet Underground member John Cale, who lives "in the shadow" of the former World Trade Center towers, sent this picture to the Chronicle on Tuesday. (Photo By John Cale)

A Day of Infamy Mach 2

Given the events of Tuesday, there's no telling how long or how wide the reverberations will ripple out, but it's safe to say that after the new millennium's very own "Day of Infamy," even the greater music community was affected. At press time, it was still too early to determine how many local and touring musicians weren't going to make local gigs thanks to the air traffic shutdown, or for that matter, how much other local music-related business was going to be affected by the fact that a good portion of the music business at large is headquartered on the island of Manhattan. But as of late Tuesday, at least Jimmie Vaughan had already canceled his scheduled Waterloo Records in-store that afternoon out of respect, while Robert Earl Keen wasn't expected to make his gig there the next day, because he was stranded in California. The Dixie Chicks, meanwhile, scheduled to play what was thought to be their only live date of 2001, this Saturday at the Austin Music Hall, also canceled their performance. Actually, that had absolutely nothing to do with the national state of emergency, but rather was thought to be due to the act's continued legal wrangling with their label Sony. Officially, the Texas Twilight Gala, a benefit for the Pediatric AIDS League of Texas, has only been "postponed," a P.A.L. press release stating that "circumstances surrounding the postponement are beyond the control of P.A.L. and the talent involved." P.A.L. director Clif Loftin told the Chronicle there was nothing further he could add except that full refunds would be available and he hoped to reschedule the event in early November.

Frank Kozik is safe in San Francisco, but he too has had a bomb dropped on him. The sarcastic pop artist is letting a press release do most of his talking, via a post at www.stonerrock.com. "Man's Ruin is officially belly-up. The bankruptcy goes through next week and I'm moving back into the world of art and design. Five years and half-a-million dollars of my life savings down the tubes is enough for me." Kozik blames the Austin-born, SF-based indie label's downfall on a combination of "mistakes, bad luck, the false real estate boom in San Francisco, high taxes, and the current dismal state of distribution -- take your pick." Kozik notes there are still more than 150,000 Man's Ruin records and CDs in warehouses around the world and told the Chronicle that no bands should get screwed by the deal, as "all we ever did was license" songs from bands, leaving them free to resell or re-release any of their Man's Ruin material. Russell Porter of former Man's Ruin mainstays the Fuckemos admits the licensing thing was a good deal, but says he's been dissatisfied with Kozik's label in recent years. "Now we won't get any money for our last album," quips Porter. "Oh, wait. We weren't ever gonna get any money from Frank for our last album!" Kozik, now thoroughly disgusted with all aspects of the music business, says he's looking forward to "a comfortable slide into semi-retirement," but asks that if anyone wishes to contact him about "doing any art or design or just to bullshit," please contact him at: KozikF@netscape.net. Just don't try to talk to him about your cool new band.

Last Tuesday's noise meeting at Ninfa's was announced too late for me to give advance notice, however, a citizen correspondent told the Chronicle that people in the group are reportedly doing research on sound level laws in other cities. Mary Gay Maxwell, a psychologist and community activist, is involved with the group, and other attendees included Joseph Rhode, the complainant in the case against the Red Eyed Fly, and attorney Rachelle Rowlins. Not a single bar owner attended. In general, it sounds as though the pro-music side wasn't particularly well represented. No matter which side you're on, if the issue concerns you, perhaps you should consider attending on Tuesday, Sept. 18, 6:30pm, at Ninfa's. Meanwhile, beleaguered Red Eyed Fly owner John Meyer announced this week that he's leaving Austin and taking a job in Corpus Christi. Meyer assures me he's not selling the Fly, and that he'll be visiting Austin every other weekend for the next two months. No doubt he'll be glad to escape all the noise.

It's not bad enough that body counts are piling up in New York and Washington, D.C., now word comes that local scene icon the Prince, aka Royal Hawaiian Prince, aka Jim Hughes of Atomic City, has been in the hospital for over a week. As you read this, Prince will have just had his gallbladder removed, the Atomic City staff saying that he's "looking at a pretty long recovery." A benefit is in the works, but if you really want to help, go and take advantage of the store's big "under the weather" sale... Billy Joe Shaver is recovering well after his heart attack following a Gruene Hall appearance several weeks ago. Shaver opted out of the scheduled bypass in favor of angioplasty on two of his four clogged arteries, and is resting comfortably at home. Doctors will re-evaluate the other two blockages at a future date, but for now, Shaver's publicist says, "He's not bedridden, and he's not running any marathons"... Well, well. After my little dig about Jack Black abandoning his fave Austin Neil Diamond cover band, comes news that the Diamond Smugglers are booked to support Tenacious D at the Austin Music Hall and at the House of Blues in New Orleans... You say no one big ever comes to Austin? Well, U2 will play the Erwin Center Nov. 5, with tickets going on sale Sept. 22... Spacehog has broken up. KLBJ's Shore Thing will, of course, go on without them this Sunday (see "Music Listings")... Oops: Madonna's touring guitarist Monte Pittman was apparently a member of Longview-based Myra Mains, not Jason Craig's old Austin band Myra Manes. A friend of Pittman told me this after I checked up on an Entertainment Weekly report and received an affirmation from Craig. Craig now says he just remembers there was somebody named Monte in the band for a week, who he never saw again. Given the new evidence, he says it most likely wasn't the same guy. I'm sure most bands have ex-members they wish they could forget about that easily!...