There's Something About Shelley 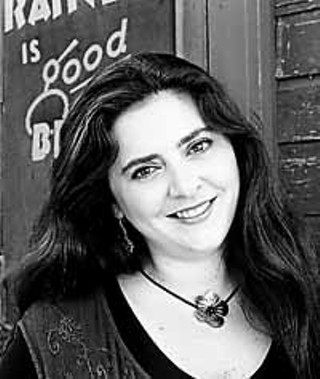 Toni Price is waxing effusive about local singer-songwriter Shelley King. "I heard her sing 'Who Needs Tears' live, but she only had it on a tape from a radio show, so that's all I had to go on. I'm so lucky to have run into Shelley!"

When you hear musicians praising the Austin music scene, it invariably comes from the singer-songwriter circle. The folk musicians of the Fifties and Sixties formed one of the first rebel music communities in Austin, banding together in the face of country music's rigid standards. Folk was often political and rarely benign, and by the time the singer-songwriter movement emerged in the Seventies, it was a self-sustaining group thanks to Kerrville, the progressive country sound, and a propensity for social interaction as evidenced by the community of people who worked at the Armadillo World Headquarters.

The ranks of Austin singer-songwriters were legions by 1992 when Shelley King stepped into them, rich with names like Van Zandt, Griffith, Lovett, Williams, Ely, Colvin. The Arkansas native moved from Houston, which turned out to be a stepping stone to Austin, and was where she met drummer and future husband Perry Drake; the couple make up half of the current Shelley King band. King swears with a distinctly flirtatious bat of the dark lashes on her velvet brown eyes that being married, playing, and touring together "is good for us!"

1993 and '94 found King and Drake playing in bands like Riverchild, and doing time on the songwriter circuit. King raises a hand to testify.

"I played the Austin Outhouse," she says, recalling the not-so-venerable, but no less important and lamentably departed venue that featured everyone from Blaze Foley to Tim Stegall. In the mid-Nineties, she decided to step forward with her name and began gigging as the Shelley King Band with a lineup that currently includes Ann Marie Harrop on stand-up bass and guitarist Kyle Judd.

King's songwriting developed a distinctly rootsy edge that well suited her full-throttle vocals, which is to say it slipped between the cracks of country-folk-blues-pop-rock. Reeling off John Hiatt, Guy Clark, and the Subdudes as influences, her eclectic sensibility takes shape the way Austin likes its music. When King released Call of My Heart last year, the Austin scene liked the self-styled "original roots-rock/Americana" sound enough to vote her into five Top 10 categories in 2001's Austin Music Awards. Call of My Heart was an impressive debut, with songs like "Drivin' by Myself" and "Tennessee Whiskey," and flew completely under the radar of the popular press.

Call of My Heart also landed King airplay on local radio frequencies like KGSR, KLBJ, KOOP, and KUT, as well as Americana stations like Fredericksburg's KFAN, and as far away as Syracuse, New York, on WAER. Songwriter and co-composer Jessica Shepherd has one of King's songs ranked No. 30 on Australia independent charts. Her live sets, like the four-hour gigs at Gruene Hall, allow King to use her gospel choir and musical theatre experience for an audience she describes as "an underground following that just grew."

King's love of performing sends her out on tours like the eight-week trek she just returned from, where she shared the stage with Billy Joe Shaver on the syndicated radio program "Woodsongs." Touring is both a curse and a blessing, she jokes. "It seems like I never left. My room is still a mess. Nobody came in and cleaned up while I was gone! But now that I've been home a few days, I'm itching to go back out."

That will probably happen later this year after the scheduled November release of King's new album, The Highway, recorded in Muscle Shoals, Alabama.

Somewhere along that trajectory, fairy godmother Toni Price attended one of LeeAnn Atherton's famous Barn Dances and heard King belt out "Call of My Heart," snagging it and "Who Needs Tears?" for Midnight Pumpkin. That's as many songs as Price favorite Gwil Owen has on it, and the combination of King's powerhouse songwriting style and Price's enormous popularity has created a most desirable effect, as a number of Tuesday Happy Hour regulars danced happily at King's recent homecoming at Antone's. Midnight Pumpkin just might make Shelley King a Cinderella.