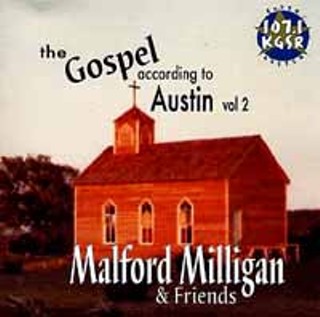 The Gospel According to Austin Vol. 2

The first edition of The Gospel According to Austin was a glorious if unexpected success. It featured a wide array of Austin artists, from Ruben Ramos and Don Walser to Guy Forsyth, performing what's been referred to as "root-gospel" to great effect. Volume two is structured differently, but packs an equally powerful punch. Center stage this time is the marvelous voice of Malford Milligan. Most locals know Milligan through his work with Storyville or his latest project, Funky London, and are aware of his ability to take on a variety of styles, always injecting them with a great deal of soul and grit. The Gospel According to Austin Volume 2 finds him in top form, augmented by the likes of Malcolm "Papa Mali" Welbourne, Steve James, Riley Osborn, and Stephen Bruton, among others. He tackles tunes from the songbooks of Blind Willie Johnson, Al Green, Blind Gary Davis, and Sam Cooke with a grace and reverence that's both inspiring and entertaining. There are also two bonus tracks at the end of the disc, one tune each from E.R. Shorts and the Gospelaires, which fit in nicely with the overall tone of this soulful and powerful disc. The Gospelaires take on the traditional "Stand the Test in the Judgement" is a revelation, with their delightful harmonies and funky attitude. One doesn't have to be a spiritual being to enjoy The Gospel According to Austin Vol. 2, but even non-believers will be moved by its joyful sound.