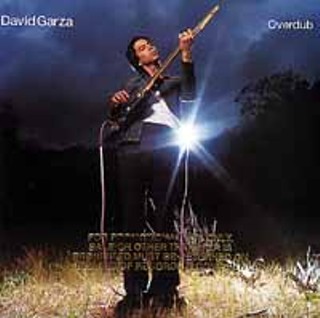 What Davíd Garza really needs is an experienced producer. One of those wily, major-label vets from the Sixties and Seventies, a Guy Stevens (London Calling) perhaps, or Gus Dudgeon (Goodbye Yellow Brick Road). Someone to help shape the Austin rocker's skyrocket musical vision. Garza's combustive Atlantic debut, '98's This Euphoria, sounded like $1 million, it was the editing and sequencing that needed more A&R. The follow-up, Overdub, got just that; advances had already gone out when the LP was recalled, a trio of songs swapped out, and the whole thing re-sequenced. The changes have made all the difference. Overdub is a captivating realization of Garza's myraid musical talents -- as a songwriter, musician, and yes, even producer. Trading in the post-grunge muscle of This Euphoria, Overdub jangles with a high-end, beat-on-the-trash-can groove and Garza's mellifluous voice. Plenty of other musicians are listed, primarily Living Colour's rhythm section, Doug Wimbish and Will Calhoun, as well as Juliana Hatfield and Austin's Craig Ross, but Overdub is all Garza. "Say Baby," a single written for the suits who didn't hear one, should be just that, while the organic, chainsaw-raga-stomp of "God's Hands" and the equally infectious clamor of "Blow My Mind" are set against the trebly tenderness of "Too Much" and rock-steady "Alone." The anthemic urgency and streaming imagery of "Crown of Thorns" is Overdub's crowning moment. Maudlin closers "Let Me" and "Bloodsuckers" should've been traded out for more upbeat fare, which is what signals Garza's need for an expert producer. Raw talent like his needs a George Martin.