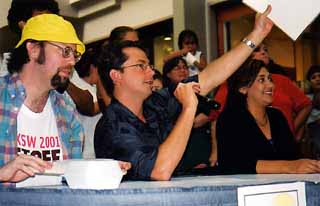 Your "Dancing About Architecture" host (in the hat) 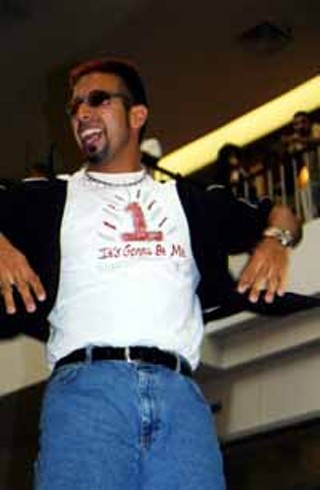 Eric Escobar does the boy thing.

Some local bands have let Shiner beer lead them on a gilded path. Some have taken the sponsorship of Jim Beam, or even accepted a helping hand from the great Jagermeister itself. It wouldn't be right for Austin's innocent, a cappella mall rats Schrödinger's Cat to find their helper in a bottle, though. Instead, the kids have found themselves winning the "Gimme a Break" video contest sponsored by the makers of the Kit Kat candy bar, appropriately enough, and have packed up their troubles in their old kit bags and headed for Los Angeles. The four members of the vocals-and-body-percussion band say that they shot their video entry, featuring them singing the traditional Kit Kat jingle in their not-so-traditional way, in their motel room the day before it was due. "We couldn't believe it was so easy," says S-Cat member John Pointer (and here I always thought a pointer was a dog!). "We just did what we always do," he adds. "I guess it's just that no one else out there is making music this way." Schrödinger's Cat will be at La Zona Rosa this Friday, bring yer own catnip, er, Kit Kat bars.

Libbi on the Label (With Another One in the Oven)

Her new album Libbiville is finally in stores after initially being available only by mail order, says Libbi Bosworth. The artist herself, however, has been taken off the shelf -- or the stage anyhow -- due to doctor's orders, as her pregnancy nears the end of its term. "I'll be back in October," says the ebullient country chanteuse, but for now Bosworth has to content herself with watching lots of Jerry Springer and Sex in the City, along with writing new material for her next album (for a review of her latest, see "Texas Platters"). At least she's settled down some, having moved eight times in three years thanks to her husband's job, and Bosworth says the couple now has a rule about staying within an hour of Austin (though how they include his current location of Laredo in that category is beyond me). Asked if she's got anything else involving music to report, Bosworth thinks a bit, then notes, "Well, last night I had a dream about having sex with Marky Mark." Um, definitely too much daytime TV in that woman's diet!

When Lucinda Williams rolls into town these days, it's with two tour buses and a full entourage of band, crew, and opening act, plus the usual family of friends. Her first stop this time around was Güero's, natch, for Friday night dinner fare, where the line of the evening was Williams' declaration to "get in touch with your inner slut." That was something she seemed none-too-shy about onstage the following night at the Backyard, which saw an unusual amount of hip-swaying from the songwriter. Opener Jim Lauderdale joined her for the encores, as did local guitarslinger Eddie Perez. The show also saw her give a shout-out to Angela Strehli and Lou Ann Barton, a dedication to Joey Ramone on "2 Cool 2 B Forgotten," and the rarest of compliments from a musician, a public thank-you to us overworked and underpaid rock critics at the Chronicle. Local singer-songwriter Sage Gentlewing was seen in the audience celebrating his 50th birthday, and though he enjoyed the show, it wasn't enough to sway him from his decision to move to Tucson come September. After Williams ran through a post-gig gauntlet of well-wishers that included former Willie wife Connie Nelson, she hightailed it to the Continental Club for the end of the always sinsational Graceland Revue. Just as Elvis Roddy's "Suspicious Minds" was catching fire, Williams was sequestered at the end of the bar with Mandy Mercier, Lauderdale, and Margaret Moser (currently seen on VH1's "From the Waist Down" series talking about sex, bay-bee!) for some late-night whooping-it-up that lasted until the otherwise gracious club staff begged them to leave. Good thing the Hotel San José across the street doesn't mind parties that last 'til dawn, as Lauderdale's drummer Tom Lewis and Chron fashion plate Stephen MacMillan Moser joined the late-night festivities. The trip was a little too short for Williams' usual shop-'til-you-drop jaunts, even from her convenient SoCo locale, but Williams promises a return trip soon.

Being for the Benefit of ...

In what's building up to be the ticket of the year, Shawn Colvin has been confirmed to play the Dixie Chicks' "Texas Twilight Gala" AIDS benefit show at the Austin Music Hall on Sept. 15. That night will also mark the Chicks' first performance ever with a full orchestra (the Austin Symphony Orchestra, to be specific) as well as being their first real concert of the year thanks to a legal dispute with their label Sony. The concert will benefit the Pediatric AIDS Network of Dallas. Speaking of benefits, there's another benefit right around the corner -- this Sunday to be precise. This one's for the Special Weapons and Tactics (SWAT) department, who came into being thanks to UT headline-maker Charles Whitman. This time, they're putting their future into the hands of Austin musicians. The Texas Tactical Police Officers Association is having a fundraising concert on Sunday in the parking lot at Seventh and Trinity, with Vallejo, Blue October, Pushmonkey, Canvas, Trepanation, and Feeding 5000 performing noon-8pm that evening. In addition to raising funds for the education and training of the members of the TTPOA, the event also benefits memorial scholarship funds in the names of slain SWAT officers Keith Ruiz, John Anthony Riojas, Joseph Cushman, and Leslie Ian Early. Finally, organizers of a benefit slated for December at the Back Room for the Moore-Weis Children's Center of Austin, are trying to get a head start assembling an evening's worth of hard rock tribute bands. So far, they've got Larry Cordle's Grand Funk Railroad tribute band and Troy Dillinger's as-yet-unnamed Rolling Stones tribute band. Anyone interested should call 603-6889 or e-mail trance@texas.net. Remember, that's hard rock only -- no Starland Vocal Band cover acts need apply.

The current Rolling Stone features a full-page shot of former teen heartthrob Davíd Garza in a photo-feature called "Fall Preview: Singer-Songwriters are Back in Style." As has come to be expected from the former music magazine, the emphasis is on the style part, though along with Garza's musings on weight loss, there's a sentence about his current album: "Overdub builds soulful pop tunes out of his velvety falsetto, danceable beats, and echoes of the Tejano music that filled his home as a child." For more words on his music, check the Chron's review of Overdub in this issue… Capital Sports & Entertainment, formerly known as Capital Sports Ventures, announced its intention this week to acquire Tim O'Connor heir-apparent Charlie Jones' Middleman Music Company. Middleman is known for producing local events such as A2K, 101X-Fest, the B.B. King Blues Festival, the Motorola Marathon, and others, and Middleman founder Jones will head up the events division for Capital Sports. Jones says he first worked with Capital's Bill Stapleton in 1999 when they assembled Lance Armstrong's first Tour de France victory celebration… Damn! That Silent Bob character just doesn't know when to shut up! The Q&A session after the world premiere of Jay & Silent Bob Strike Back, which was held Monday night at the Paramount Theatre in beautiful downtown Austin, took in excess of two hours as star/director Kevin Smith took the time to ensure that every one of the audience's questions were answered, and that at least one 10-year-old boy in attendance got all the clitoris jokes in the movie. I didn't notice if the rarely silent Bob Schneider was in attendance at the screening, but he can be heard via his previously released song "Bullets" on the soundtrack album… By the way, the photos on the page this week are from the Verizon Wireless *NSYNC lip-synching contest that I helped judge (along with Fox 7's Julie Moody and the Beat FM's Tom Michel) at Highland Mall a couple of weeks ago. Despite confusion over whether the contest was "adults-only" or not (I don't mean dirty, just that there were cute kids vying alongside the desperate parents who were supposed to be trying to net tix for their offspring), it was a surreal bit of silly fun. The winner, Eric Escobar of South Austin (pictured), should be more than satisfied with the limo ride and the four front row seats to see the boy band that he clearly likes waaay too much… Addendum: Since the word of Robbie Jacks' passing came just as the paper was going to press last week, the headshot we used of Jacks went uncredited. That picture, which several people pointed out was Jacks' all-time favorite photo of himself, was taken by Martha Grenon. Also, I ought to point out that many hours of material from Jacks' ol' 101X radio show with Gibby Haynes is floating around the Web via various Napster-type services. I can't access the stuff on this junk computer I'm at, but reliable sources tell me that the locally based file-sharing service at www.audiogalaxy.com has as fine a selection of the files as you're likely to need…