Robbie Jacks is dead, but Auditorium Shores is not. Check back later about the Empanada Parlour. 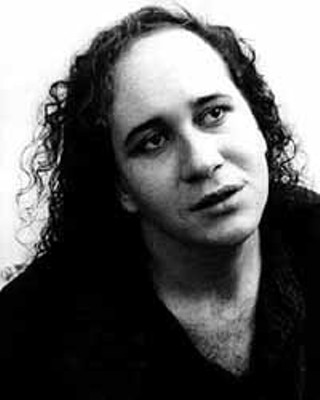 Just as the Chronicle was going to press on Wednesday, along came word of the sudden death of Robbie Jacks, local singer, actor, and all-around character. Jacks, who according to friends would have been 42 today (Thursday), was a ward of the Austin punk/New Wave scene of the early Eighties, and is probably best known to the world in general for his role as Leatherface IV alongside Renee Zellweger and Matthew McConaughey in the not-quite-straight-to-video classic, The Return of the Texas Chainsaw Massacre. As befitted the high-voiced singer, his Leatherface less recalled Ed Gein than it did Divine. Musically, Jacks' most prominent role was with Boy Trouble, the band born from the early-Nineties local rock musical of the same name. Later, he recorded with Blondie's Debbie Harry while counting chanteuses Exene Cervenka, Sandra Bernhard, and Madonna among his chums. Jacks was taken to the hospital on Tuesday after telling friends he felt some numbness in his limbs, but appeared to be recovering when he suddenly passed away on Wednesday morning. At this time, his death has gone from being ruled a heart attack to something less certain. Friends of Jacks say his cats will be put in good homes and that after the shock wears off, there'll be a memorial get-together in his honor.

You'll recall that two weeks ago in this column we discussed a lawsuit issued by a pair of individual downtown residents against the Red Eyed Fly regarding the volume of the music coming from the club. Well, big business is getting into the act as well. This week, the Empanada Parlour, a tiny live music venue specializing in world music on Sixth Street, was slapped with a damages suit by the Sheraton Hotel for having the music allegedly too loud at the corner of Sixth and Waller Creek. "It's hard enough running a small business and always being cash-poor," says owner Ash Corea, "and then you get a summons for a $300,000 lawsuit!" Aside from the size of the server, the story is the same as the Fly's tale: A venue that's never received a citation for violating the city's stated legal sound levels has to go to court anyhow. Empanada soundman Damon Lang says the Parlour and the Sheraton have had a long, adversarial relationship, and that under a previous night manager, the hotel often fought with other venues like nearby Spiros and Emo's. The latter club's staff say they've had no complaints from the hotel, while Lang attests that the Sheraton has sent the APD to his club "pretty much every night we've had live music," including one evening when the act onstage was "an acoustic jazz trio -- downstairs, inside, and with the doors closed!" Corea, who received a separate summons at her home, says it's not as though the hotel didn't come to Sixth Street unaware that they were building in an entertainment district, reminding that the location where the Parlour stands at 709 E. Sixth was a nightclub before the Sheraton was built, under names like the Private Cellar and Faces. She's gotten some legal help that, if not completely pro bono, is at least of the "will work for food" variety, but frets about the massive hotel chain's legal power and worries that the Sheraton's recent concentration on the Parlour indicates that "because we're small, they [hope that] they can make an example of us." The Sheraton, for its part, did not return the Chronicle's calls. While we're in the vicinity of beleaguered live music venues, I should report that Red River's Atomic Cafe closed suddenly on Sunday, and will be replaced by a new venue called Elysian. A mysterious ad in this week's Chronicle (p.100) reveals that the Atomic "is migrating to Arizona whilst its spirit undergoes a metamorphosis." The new club's owner says only that Elysian "will still be a dance club," but since the Atomic was not what one typically thinks of as a "dance club," that statement raises more questions than answers.

Backwash on the Shores

"We deny everything!" would be a fair paraphrase of the refrain coming from all points of city bureaucracy on the heels of last week's Chronicle investigation of plans to shut down Auditorium Shores on a possibly permanent basis. Again as then, I refer you to our Politics section for further details, but the gist of things is that the city is claiming there was never any intention of closing the beloved area to musical events and other public assemblies, and that the Chronicle misunderstood their intentions. Well, if we did, we weren't alone. Arts Center Stage, the force behind construction of the Long Center for the Performing Arts (where Palmer Auditorium now stands), also questioned the city's intentions in a memo -- dated prior to the Chron coverage -- to City Manager Jesus Garza, asking the city to affirm that events will resume at Auditorium Shores "as quickly as possible." Well, the city didn't do that, but now they're assuring all concerned that the Shores will not die. Whether or not that was ever their intention may forever be hidden beneath a tide of red tape.

In the Air, On the Air

The full-on, hourlong, weekly television series taped at Austin Bergstrom International Airport by the Austin Music Network (Cable channel 15) is set to begin running this week, after months of taping on the airport grounds and at venues around Austin. Music in the Air, sponsored by the Department of Aviation in conjunction with AMN (insert your own joke about whether it will "fly" or not here), makes its official debut tonight, Thursday, at 8pm, with some half-dozen reruns throughout the week. Tamasha Africana is the first act to be spotlighted on the weekly showcase, with upcoming Music in the Air shows featuring (in order) Jake Andrews, Bobby Boyd, Carolyn Wonderland, the Ramos Family reunion, La Tribu, Freddie Powers, Ian Moore, MC Overlord, Susanna Van Tassel, the Resentments, and the Texana Dames. To ensure a smooth flight, all but a couple of the shows have been completed at this point, and though I haven't seen tapes of any of the completed programs, I trust the current AMN staff to create something admirable given the time and effort these shows have been allotted. The big question now, with budget-tightening city meetings coming up at the end of the month, is whether the network will end up grounded before the series completes its voyage from takeoff to landing.

It Gives You Wings!

Sangre de Toro is back from their visit with Jeff Pinkus at the Conservatory of Recording Arts in sunny Arizona, where Pinkus and some Butthole Surfers/Scratch Acid fans at the Conservatory aided Brett Bradford and Max Brody in recording some new tracks on a board that's been used by Metallica, Aerosmith, and Kenny G. (Hey, a board can't choose for itself!) The bloody Toros had a week to "lay down as much as we could" according to Bradford, and now they're waiting to hear mixes the Arizona team comes up with. Those will be paired with new mixes of the tracks on the band's promo disc they were shopping at SXSW this year to make a new album that will hopefully come out by the end of the year. For now, you can see them with Zulu as Kono opening up for Zeni Geva at Emo's on Monday. Expect Sangre to spill as Pinkus (this month's featured musician in Bass Player magazine) is replaced onstage by the duo of Zulu Josh Chalmers and Brown Whörnet's Julian Peters. According to the Emo's e-mail alert, the night will also feature a "rare solo-guitar noise performance" by Zeni Geva frontman KK Null, which the club warns "will cause severe synaptic damage to all in attendance."

"It's the American thing," says Marky Ramone, speaking on the phone from New Yawk. I think he's just differentiating U.S. punk from the U.K. variety as he describes the 25th Year Punk Anniversary tour he'll be part of with the Misfits and members of Black Flag in September at Emo's. The club originally thought they were getting Dee Dee Ramone as part of the Misfits, but they're satisfied either way. Actually, the phrase applies well to any and all of Marky's current projects, which includes this Saturday's show at the Back Room -- the closest thing to a lecture circuit that venue has ever seen. Marky says people had been asking him "to do a thing on my times on the scene in New York," with not only the Ramones, but others he hung out with, like Talking Heads, Blondie, and Richard Hell. Thus, he'll be speaking at the club about his experiences of the past 30 years, and of course about his late bandmate Joey Ramone, accompanied by a slideshow of rare photos from the NY punk scene, and following things up with a Q&A and an autograph session. Hey, if Henry Rollins can make a living doing it, why can't a Ramone give it a whirl?… We already knew Austin's Applicators were chummy with Greg Hetson and were opening for the reunited Circle Jerks at Emo's this Saturday. Add to that, however, an additional four days for the gals in support of the Jerks, including all their Texas dates and one in Louisiana… Adam Bork aka Earthpig seems determined to see his career crash and burn. Besides being a member of Li'l Cap'n Travis, he's gotten involved in a documentary about demolition derbies, with the main car wreckage involved coming up in Honesdale, Penn., on Monday. Bork says there'll probably be a Li'l Cap'n Travis song or two in the film, plus some Earthpig songs and instrumentals, and he also expects to drive a19-and-a-half-foot-long '79 Lincoln Continental with a 460 motor in one heat of the derby. Well, it's safer than a mosh pit, they say… Drum 'n' bass technician Twist 1 will be representing Austin at the Mekka Electronic Music Festival at Fair Park in Dallas this coming Wednesday. That's the only Texas stop on the 10-day Mekka tour, which features a few dozen shades of electronica and dance music, from Paul Oakenfield and Roni Size to Biz Markie and De La Soul… And in one last bit of punk rock news this week, rediscovery of the week goes to Andy Fuertsch, formerly of Lester Bangs & the Delinquents. Fuertsch has a new group, Shaker Dog, which will play at a reception featuring his own artwork on Friday, 6-9pm, at the Museum of Fine Arts Austin and at the Austin Daze Benefit on Saturday at Cafe Mundi at 8pm. Seeing as Cafe Mundi is on E. Fifth Street, hopefully no neighbors will object to live music in this, the Litigious Music Capital of the World….