Spit Out the Seeds 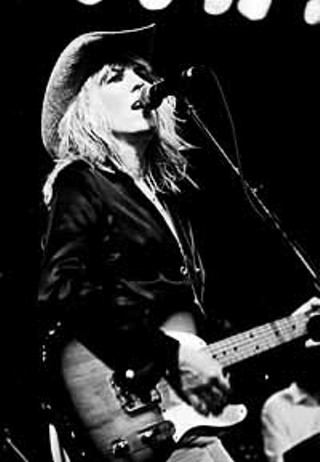 She likes the Moody Blues and champions Sade. Some of her fans listen to N'Sync. Her own songs are so emotionally charged they make her cry. This is Lucinda Williams, Time magazine's Best Songwriter in America? You betcha.

With Essence, another critically acclaimed LP under her silver-and-leather belt, the current Nashville dweller is shouldering a heavy touring schedule that includes this Saturday's gig in her former hometown. Two days after playing The Tonight Show, Williams called from Phoenix to play catch-up.

Austin Chronicle: Your songs are so personal. Do people know you if they know your music?

Lucinda Williams: I don't think so, I'm not sure how I'm portrayed through them. It would be interesting to know how they do see me.

AC: Mandy Mercier and I both know you well, so we're often approached by fans wanting to know what you're like. The question I get asked most is, how's your sex life?

AC: Sexuality is such an up-front part of your songs, and for those of us well past the first rush of hormones and humping, it's a gratifying portrayal.

LW: Yay! I am glad I am doing that! I grew up in an interesting household. There was family tradition and a politically liberal environment, a fairly feminist kind of upbringing. I wasn't brought up to get married and have babies, I was brought up to pick a career.

AC: Did you get that from your mother or father?

LW: My mom didn't pursue music professionally, but it's a combination of them both. There was a lot of interchange and discussion. Sexuality was talked about in an open, healthy way. Certainly it came from my stepmother too. She was younger and brought in a different dynamic.

AC: I remember seeing a collage you did as a teenager, in which you had cut out pictures from magazines. Sex seemed to be the dominant theme.

LW: That's a perfect example of what I'm talking about. I still have that collage, which is a real testament to the way I grew up. I had a lot of creative freedom growing up. I collaged the bathroom at my parents house when I was home for summer one year. That's how much free time I had back then.

AC: Was sexuality a theme in that collage too?

LW: Big time! Naked women from Playboy mixed with political figures of the day, pictures of the Beatles and demonstrations, peace symbols, anti-war images -- just a collage of the times. There was no hint of "I can't put that on there," no censorship. I learned early on I didn't have to censor myself.

This makes me think of stuff I haven't realized had a lot to do with how I grew as a writer and how I approach my own art. I approach my music like art. Like any real artist, you don't censor yourself. I grew up around poetry, and you can't censor yourself writing poetry, whether it's a cat sleeping in the window or a wreck you saw on the highway or sex. It's part of life. That's the outlook I grew up with.

AC: Did you write poetry when you were young?

LW: I didn't really get into it. I dabbled and read, but I just didn't go in that direction. It's really a different craft. [Pauses] My dad and I kinda get up about it; he doesn't like songs, and I don't like poetry.

AC: Does he critique your lyrics?

LW: If he thinks a line doesn't work or doesn't make sense, he'll tell me and tell me why. That's how I learn. I show him everything, it's like having a built-in creative writing class. Over the years, he's had to tell me less and less, and that's how I knew I was getting better. Everyone needs a mentor who's better than they are, otherwise it's just you and your art. You need some sort of gauge, and I was fortunate.

AC: How do you stay sane during the touring?

LW: I bring all my mail with me and do correspondence. I'm a big letter writer, and I love greeting cards. I bring all my favorite music. I have my own private bus now. and it's made all the difference in the world. Just my tour manager and me, my home on wheels. I've got an actual bedroom where I sit and listen to music and write letters.

AC: What are you listening to right now?

LW: I have different kinds of music for different times of day. In the morning I like Judy Collins' Wildflowers and Jackson Browne's Saturate Before Using. Then any Nick Drake or Kate Wolf or Sandy Denny. I've really been into Brazilian music lately -- Antonio Carlos Jobim, Astrud Gilberto, and Virginia Rodriguez -- and I love Sade's new CD, Lover's Rock. A lot of people underestimate the content of her music. Some of her music is very serious political statement about poverty.

LW: Not really. The Moody Blues, maybe. A lot of people go, "Moody Blues!", but I like them. Quicksilver Messenger Service and It's a Beautiful Day. ZZ Top always, I love their stuff.

AC: You'll carry around a half-written song for a long time, won't you?

LW: Yeah, "Baton Rouge" was like that -- an idea I had years and years ago.

AC: That song struck me as more of a Car Wheels song than part of Essence.

LW: It was written before Car Wheels. I had some of the lyrics as far back as 10 years ago. Like I first wrote "Out of Touch" in 1981 when I moved back to Austin with Clyde. I have it on an old demo tape that far back. It went through all these different incarnations and rewrites. I was almost going to put it on Car Wheels, but I'm glad I didn't.

AC: When I first heard "Out of Touch," I interpreted it as a soundtrack for meeting an old love. Another reviewer said it was about Gurf Morlix.

LW: I wasn't thinking about the ex-lover thing as much as the plight of the human condition. That awkwardness, being out of touch. The ones I wrote about Gurf were "Reason to Cry" and "Broken Butterflies." That anger ...

I tell you I don't know where that song came from, completely out of my subconscious. Sometimes when I get these things it's in a dreamlike state. "Swallow the manna from heaven and spit out the seeds." What the fuck was that about? I don't know how I came up with that! I remember using the Biblical imagery, getting [ex-boyfriend] Richard [Price] to help me because he knew the Bible. I was using Biblical characters to define what I was trying to get across.

"Broken Butterflies" was the last song I wrote for Essence [and the LP's original title], and it all fell together in that flurry of writing. I sang it for the first time live last night, and I swear to God I got offstage and broke down. I started sobbing. Something happened, singing it live like that -- the band played real sparsely and it was just --

AC: Besides sexuality, catharsis is one of your underlying themes. Is it in fact good therapy to write through the bad times?

LW: Oh yes! I know when I've hit on something because when I'm writing, I'll start crying. With "Lake Charles" I did that. Every time I sang it, I would cry. It took me back to that place. I wrote a song for my sister that didn't end up on the record, and I sobbed like a baby through it, because it was about her illness and how much I love her. She's been really sick with pancreatitis. It's a serious illness with no cure, and it's been debilitating for her.

But yes, it's very cathartic, and I think that's what people pick up on. It's interesting to meet the different artists who like your music, like Joey Ramone. I did a Writers in the Round with him at the Bottom Line. He produced a record with Ronnie Spector and asked me for songs for her to sing, just a couple years ago before he got so sick. He sent me a tape of a song he started and wanted me to work on.

AC: You're very fortunate to have an intelligent older audience, although you seem to hit well with the younger crowd too.

LW: My audience is real mixed. It's the really young kids getting into it that I like. They don't understand it anymore than I did Bob Dylan at age 12, but I was still drawn to his music. It was that powerful. Maybe it's the simplicity of the melodies.

A couple sent me a tape of their 11-year-old daughter, just learning to play guitar, and she'd learned all my songs and recorded them. It touched me so much I cried. It reminded me of me. She was just a year younger than I was when I started playing guitar and learning Dylan songs. And to hear this 11-year-old sing "Changed the Locks" and "Drunken Angel" with her little girl voice and imperfect phrasing was so endearing.

Some kids came up to me after a festival I played recently. They were about 6, 7, and 10, and I asked them what music they listened to. "N'Sync," they said. "You, them, and me?" I thought that was just adorable.